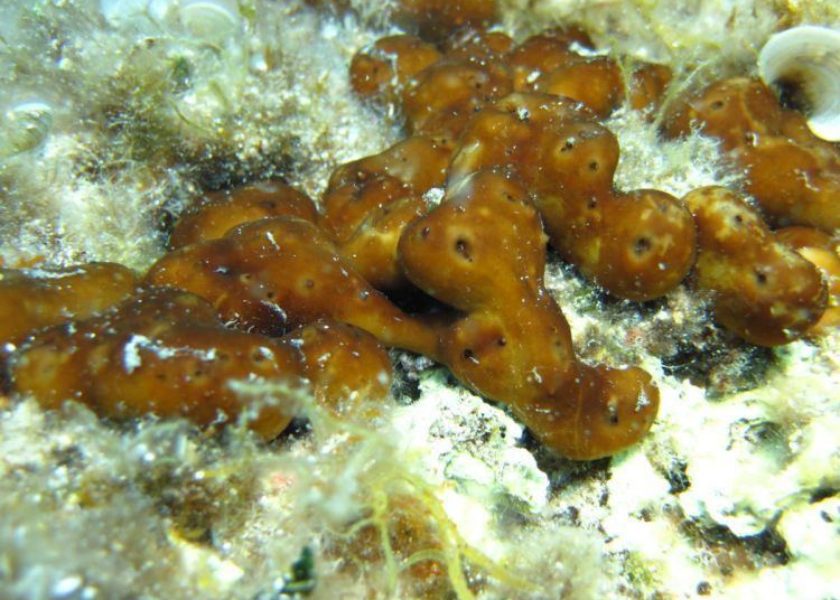 Is it a plant? Is it an animal? Scientists believe that sponges are a very primitive animal, one of the first groups to branch off the evolutionary tree after the common ancestor of all animals. They are multi-cellular organisms that rely on water flow through their stationary bodies in order to feed and remove wastes – we think this makes chicken liver sponge (Chondrilla nucula) beast enough to be included in our Bermuda Beasts series!

1. So named for its striking resemblance to chicken liver, in his book Bermuda’s Marine Life, Wolfgang Sterrer says, “I doubt whether this sponge would make good patè.”

2. This grim looking sponge can be found in dark caves as well as sunny habitats, which varies their colour from greener to more yellow the more light it is exposed to. It has a slippery and smooth texture and is dotted with pores.

3. The sponges are toxic, deterring fish predation and allowing them to overtake other sessile organisms competing for growing space on the reef. It commonly overgrows corals, and encrusts reefs as well as mangrove roots. Studies have shown that mangrove-growing corals are more toxic than reef-growing individuals.

4. A few reef organisms specialise in eating the sponge, including angel fish, zebra slugs, and hawksbill turtles. By ingesting chicken liver sponge, the predators can store some of its toxins in their tissues. The zebra slug is toxic to predators as a result. Hawksbill turtles are usually passed over by turtle hunters because they can make humans fatally sick as a result of their sponge diet, however, they are still harvested for ‘tortoise shell.’

5. Green turtles are commonly thought to eat a diet exclusively of sea grass, but many of them also have chicken liver sponge in their stomachs when examined. It is likely that the turtles eat the sponge to absorb important nutrients, but only eat very little of it in order to be able to digest it without problems.

6. The sponges feed by filtering plankton out of the water through openings in its body. It is an extremely efficient feeder, removing 80% of suspended particles in the water column every 24 hours.

7. Sponges support a high concentration of bacteria in their tissues, which help the sponge to survive in return for being given a safe place to live. Sponges are often targeted for medical research to see if the bacteria they support are helpful to humans.