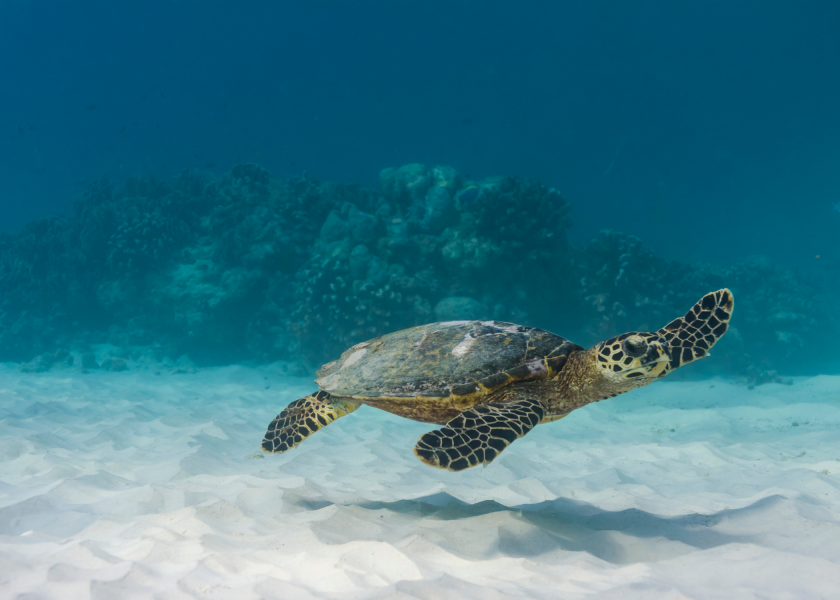 Only two species of turtle occur regularly in Bermuda, the green turtle and the hawksbill. While green turtles can be commonly spotted inshore, coming up for breath as they graze their sea grass patches, hawksbills are found in deeper-water offshore reefs. Green turtles are named for the green colour of their meat, while hawksbills are named for their sharp beaks that allow them to shear sponges off of the reef surface.

1. Hawksbill turtles are critically endangered the world over, mostly due to human fishing practices. They are sought out for their meat and their scales.

2. Hawksbill turtles can be a brilliant yellow ochre in colour, with very dark scales, and their exact colour depends on water temperature. While green turtles have shells composed of fused scutes, hawksbills have overlapping scutes, creating a serrated appearance. The beautiful patterns on their shells are a highly valued commodity, sometimes still illegally sold as “tortoiseshell.”

3. Hawksbills are most commonly known to eat sponges, though they are known to eat a wide variety of things including jellyfish and sea grass. They can extract sponges from crevices in the reef using their pointed beak. Sponges are toxic organisms, and can cause hawksbill meat to become toxic to humans.

4. Often hawksbills specialize in eating only a small range of sponges, forgoing others. The most common sponge ingested by Hawsbills is probably the chicken liver sponge, which is found in Bermuda.

5. Hawksbills are a mid-sized turtle, growing to about one meter in length, and weighing about 80kg at the height of maturity.

6. Though hawksbills live in the open ocean, they spend most of their time inshore and feeding on reefs. They can be spotted on Bermuda’s reefs a short way offshore. They can most commonly be spotted with their head buried in the reef, searching for sponges.

7. Like all turtle species, little is known about the Hawksbill’s life cycle. It is presumed that the hatchlings enter a pelagic stage, feeding in the open ocean; possibly in the Sargasso Sea. They then enter a benthic feeding stage as they move inshore to feed on reefs. Lastly they enter a reproductive phase, where they mate biannually in isolated lagoons and later lay eggs on a select few beaches.

8. Hawksbills reach maturity after roughly 20 years, but their life span is unknown. Because of their strong shell, they have few predators when fully grown – in Bermuda’s waters, only the occasional shark might predate a turtle.