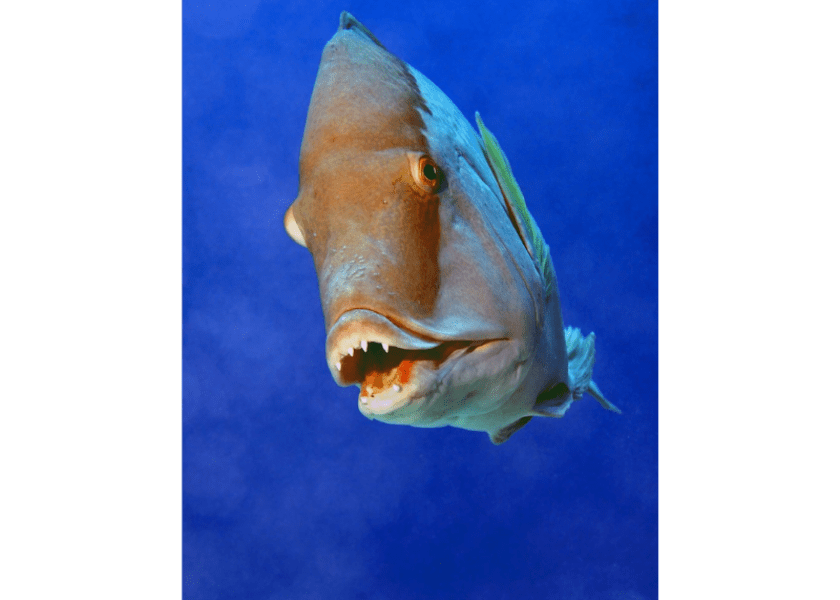 A well-known Bermudian specialty is the Hogfish (Lachnolaminus maximus). These beautiful creatures habit our waters and are valued as a delicacy. Here are seven interesting facts about Hogfish:

1. Hogfish can be found inshore and in shallow waters. They love to hunt on the hard-bottom sand flats of the ocean floor. Hogfish use their pig-like snouts (thus their name!) to root for food beneath the sand. Their usual prey includes: crustaceans such as small crabs, gastropods, bivalves, and other mollusks.

2. The colours of the Hogfish vary and can quickly change colour. Their colours range from a reddish-brown to a pearl white, depending on age and sex. Older males have a more distinct black band located towards the back of their heads, as well as a dark purple patch along their back.

3.  The ability to change their colour comes from special pigment-containing cells called chromatophores. These cells can spread their pigments, or change the skin’s overall appearance when activated by light. Hogfish have the ability to sense changes in light through their skin, which allows them to detect a predator.

4.  The Hogfish belong to diverse group of marine fish known as wrasses. Wrasses evolve to survive in a variety of different environments and are common to coral reefs. Much like other wrasses, Hogfish are sequential hermaphrodites, meaning they begin their lives as a female, but with maturation, change sex at around three years of age.

5. Just like Bermudians, the Hogfish are social creatures. It is normal to find a harem of Hogfish, with the male protecting and mating with the females. Hogfish spawn only in winter, about an hour before sunset.

6. Another local favourite, the Parrotfish, are close relatives to the Hogfish.

7. Unfortunately, Hogfish have been categorised as vulnerable by the International Union for Conservation of Nature. This is likely due to spearfishing: 30% of the global population of Hogfish has declined due to spearfishing alone. Here in Bermuda, the legal minimum size to hunt Hogfish is 18 inches (45 cm): smaller Hogfish tend to be females, and thus are needed to ensure reproduction.

Photograph above was taken from Ron Lucas’ app, Bermuda Reef Life HD, which you can download here.