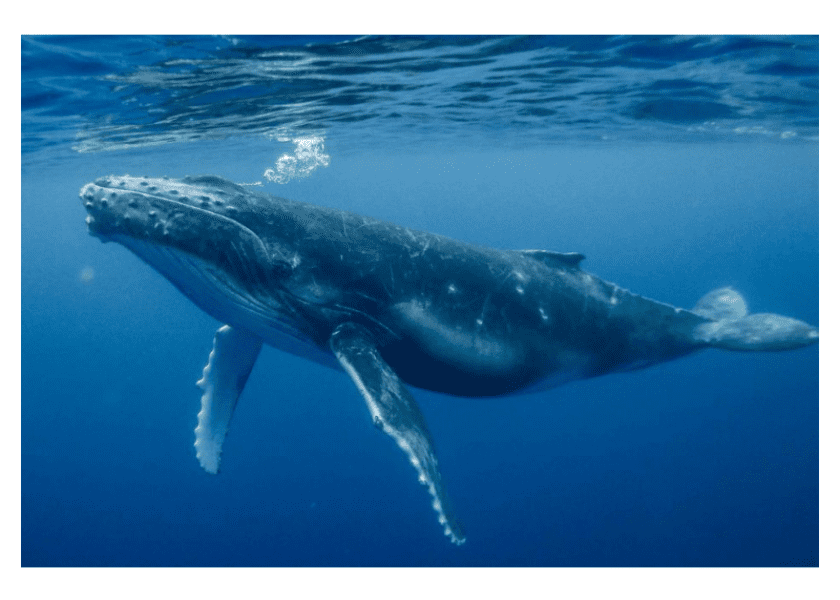 Humpback whales are currently making their way past the island as part of their annual migration north to cooler waters. Before you head out whale watching, take in these 10 facts about humpbacks!

1. Humpback whales are well-known for their musicality. The gentle giants sing loud, complex songs which can last hours! And not only are they long in their duration, the songs sung by the humpback are the most varied in the whole of the animal kingdom – humpback wales can produce sounds ranging from high-pitched squeals and whistles to low rumbles and deep tones. Only males are sing though, which scientists believe they do to attract females and to let other males in the area know that they are there.

2. Humpbacks are mostly found near coastlines. They migrate annually from summer feeding grounds near the poles to warmer winter breeding waters closer to the Equator. It is during their migration north each spring that humpbacks make their way past Bermuda.

3. Mothers and their young swim close together, often touching one another with their flippers with what appear to be gestures of affection. Females nurse their calves for almost a year, though it takes far longer than that for a humpback whale to reach full adulthood. Calves do not stop growing until they are ten years old.

4. In order to migrate annually, humpbacks have to be powerful swimmers. They use their humungous tail fin, called a fluke, to propel themselves through the water and sometimes completely out of it. These whales, like others, regularly “breach”. This is when the whales leap from the water before landing with a tremendous splash. Scientists aren’t sure if this breaching behavior serves some purpose, such as cleaning pests from the whale’s skin, or whether whales simply do it for fun!

5. Humpback whales are enormous creatures, akin to the size of a school bus – that’s about 60 feet long and about 40 tons in mass. Their flippers alone can grow up to 16 feet long (the largest appendage of any animal). Like most whales, the female is larger than the male.

6. Humpbacks don’t get their name because they have a hump on their backs. The name comes from the way they arch their backs before making a deep dive downwards into the ocean.

7. Unlike some other whale species, humpbacks typically travel alone or in small pods, consisting of just two or three whales. Pods will travel together, communicate with one another and even help each other hunt.

8. Humpbacks are baleen whales, meaning that they don’t have teeth but rather 270-400 fringed and overlapping plates which hang down from each side of the upper jaw. When a humpback opens its mouth to feed, water rushes into it’s mouth and small animals are caught in the whale’s baleen, which the whale then feeds on. Humpbacks mostly dine of small fish, krill and plankton and they hunt and feed in the summer and will fast during the mating and migration.

9. When hunting together, humpbacks use a technique called bubble netting, where they use air bubbles to herd, corral and disorient fish. Humpbacks can eat up to 3,000lbs of food per day.

10. A female humpback has a baby every two to three years. She carries her young for a gestation period of about 12 months. Babies, called calves, are born live, like most mammals. The newborns are between 10 and 15 feet long and weigh up to a ton.