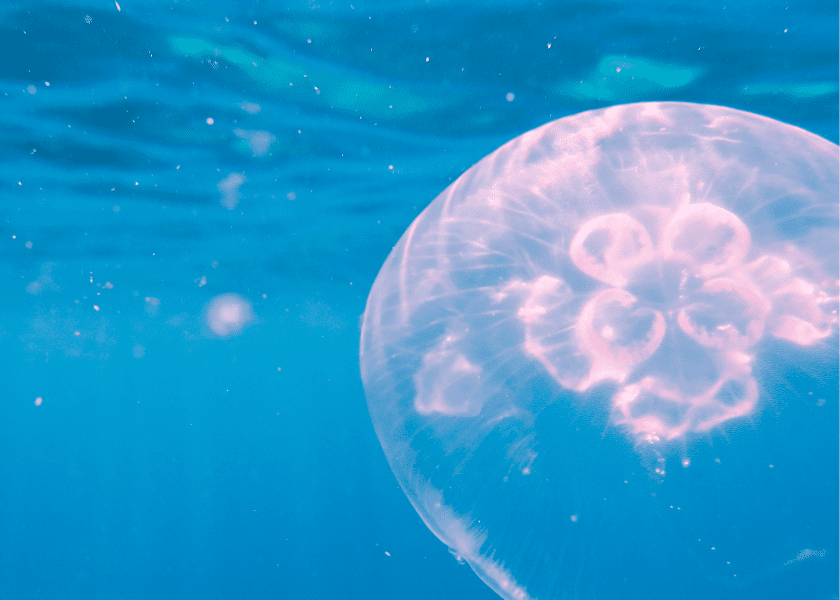 Usually found bobbing in the bays of Bermuda in the summer months, this sneaky floating creature is a nuisance for swimmers and fisherman. Here are 5 facts about the Moon Jellyfish you might not know.

1. The range of size can greatly vary. With the diameter of their ‘bell’ ranging between 5 and 40 cm.

2. The jellyfish is actually carnivorous and feeds on zooplankton including fish eggs. The food collects in their tentacles and on the surface of the animal, where they become entangled in mucus and eventually moved through a series of canals and brought to the stomach.

3. These invertebrates do have some predators including fish and turtles, particularly the leatherback turtle. However, the jellies have very little nutritional value. The nudibranch also eats jellyfish when they are at the polyp stage.

4. They might not be deadly, but the moon jellyfish do have a slight sting to human skin. It comes from the stinging cells, called cnidocytes, which cover their tentacles. The sting is harmless but can be aided by vinegar or baking soda.

5. The plastic shopping bag in the water has more of an impact than you might think. In the eyes of a turtle or fish, plastic debris such as shopping bags can resemble a tasty jellyfish snack and result in death from an obstructed digestive tract. As a result of the decline of leatherback turtles and other jelly predators such as the Atlantic bluefin tuna, the jellyfish population can increase massively known as ‘blooming’. These large swarms of jellyfish, therefore, deplete the larvae of commercially important fish species by either predation or food competition.