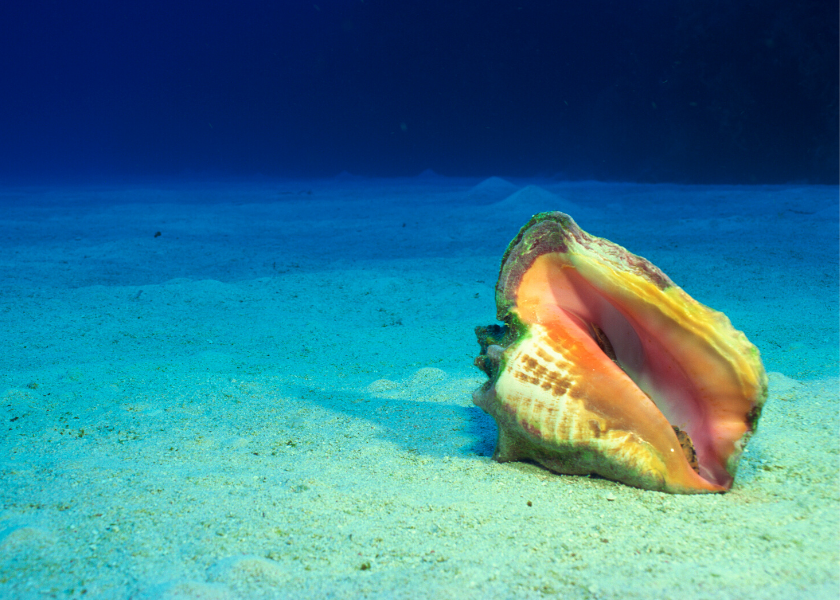 The name “queen conch” refers to both the large, marine mollusk and its shell. Queen conchs are soft-bodied animals, belonging to the same group as clams, oysters, octopi, and squid. They live in shallow, warm waters on coral reefs or sea grass beds. Here are 5 additional facts about the queen conch you probably don’t already know.

1. A queen conch can reach up to 12 inches in length and can live for up to 40 years. Its shell grows as the mollusk grows, forming into a spiral shape with a glossy pink or orange interior. After the queen conch reaches maturity, the shell stops growing in length but continues to grow in breadth and its outer lip begins to expand.

2. Queen conch eggs hatch after four days and the planktonic larvae (known as veligers) drift with the current for between 14 to 60 days. After reaching lengths of about a half-inch, they sink to the sea bottom and hide. There they morph into juvenile forms and grow to about a 4-inch length. Finally, they move into nearby seagrass beds, where they aggregate in masses and stay until mature. That happens at about 3.5 years of age when they reach their maximum adult length.

3. Their slow growth, occurrence in shallow waters and late maturation make queen conch particularly susceptible to over-fishing. Habitat degradation, over-fishing, and the use of SCUBA have led to harvest of previously unexploited populations in deeper waters.

4. Conchs are herbivores that eat sea grass and algae as well as dead material. In turn, they are eaten by loggerhead sea turtles, horse conchs, and humans.

5. Adult conchs wander for miles instead of staying in one place. Rather than swimming, they use their feet to lift and and then throw their bodies forward. Conchs also are good climbers. The average home range of a queen conch varies from a third of an acre to nearly 15 acres. They move within their range at the greatest speed in the summer during their reproductive season, when males search for mates and females look for egg-laying habitats. They are social creatures and reproduce best in aggregations.