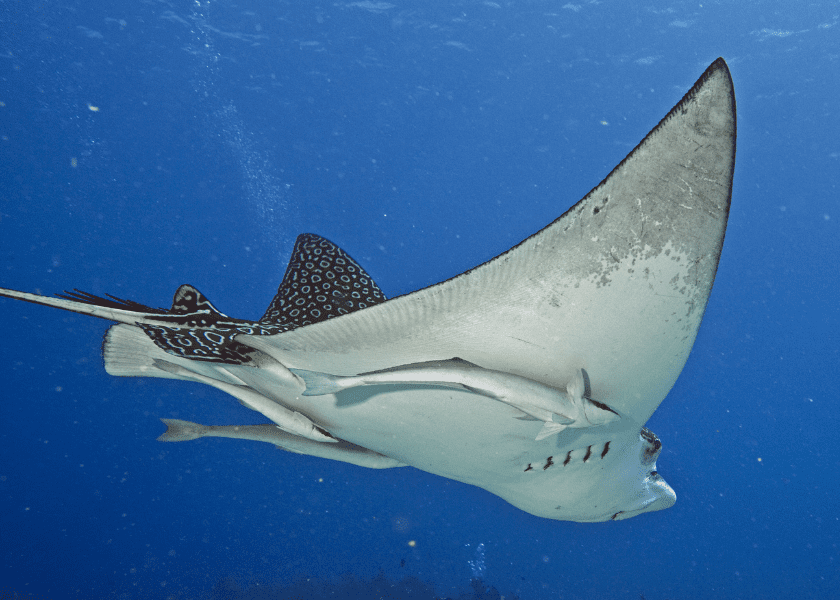 Have you ever been snorkeling or diving and suddenly found yourself with an uninvited guest stuck to your flipper? Sucker sharks, notorious for hitching a ride, may be some of the laziest creatures in the ocean.

2. Scientists have recently proven that the strange sucking disc, unique to the remora, is a dorsal fin. The usual dorsal fin has been rearranged into small paired slats that look like a sneaker’s sole.

3. By attaching itself to the ‘host’, the remora is carried along, allowing it to travel to different areas without using up energy by swimming there itself.

4. Remoras feed on the remnants of their hosts’ meals. In some ray and shark species, these fish live inside their mouths.

5. Their payment in return for a lifetime of free rides is their expert cleaning services. They act like little vacuum cleaners preventing the growth of any external parasites.

6. They create a noticeable drag on their hosts, slowing them down in the water. When dolphins find themselves with an onerous remora, studies have shown they tend to jump out of the water more often, perhaps in an attempt to knock them off.

7. The ancient mariners’ myth that shark suckers slowed down ships is over two millennia old. The description of a fish known as ‘ship-holder’ can be found in Aristotle’s 10-volume encyclopedia History of Animals written in 350 BC! Remoras were even blamed for the defeat of Mark Antony during the naval Battle of Actium in 31 BC.