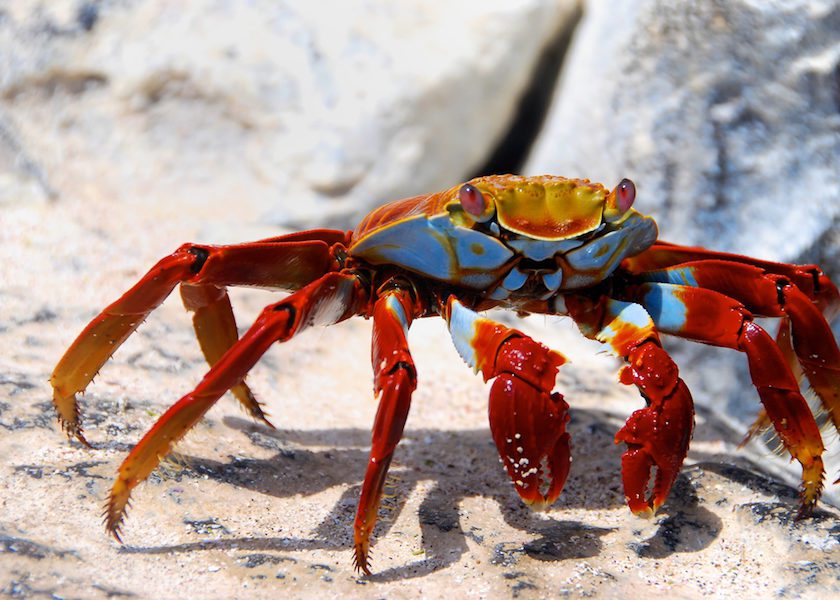 Sally Lightfoot crabs are brightly-coloured coastal scavengers, found on Bermudas rocky shoreline. It is quite common to see Sally Lightfoots scuttling along the rocks and sand in search of something to eat or to collect the discarded shells of moulting crabs. While Sally Lightfoot certainly aren’t rare, we bet that you probably don’t know much about the vibrant crustacean, so here are 4 facts to get you up to speed.

1. As said before, Sally Lightfoot are scavengers – they have an extremely generalist diet, feeding on anything on almost anything they can find, even other crabs. This makes them an important part of the ecosystem, as they provide services such as keeping the shore clean of any organic debris.

2. They are rumoured to have been named after a Caribbean dancer, due to their agility in jumping from rock to rock, their ability to run in four directions and their capacity to climb up vertical slopes. This extreme agility makes them very difficult to catch.

3. Adult Sally Lightfoods have an intense blue and red colouring on their shells, with a white or pale blue underbelly. Younger crabs have darker colouration with red spots. Every time the crabs moult their shell, the spots become gradually larger, until they obtain the adult colouring.

4. Female Sally Lightfoot crabs carry their eggs around with them on their stomachs until they hatch into the water. The larvae then swim out to deeper waters, where they consume phytoplankton and undergo a rapid series of moults. Eventually they undergo metamorphosis to become juvenile crabs and swim to shore, where they start to scavenge, becoming bigger and more colourful with each moult. These juveniles tend to travel in large groups until they reach maturity, after which they become largely solitary when not mating. When they are not mating or feeding, the crabs spend their time hiding in cracks in rocks. If they are disturbed, they may spray water or shed one of their legs as a defence mechanism.