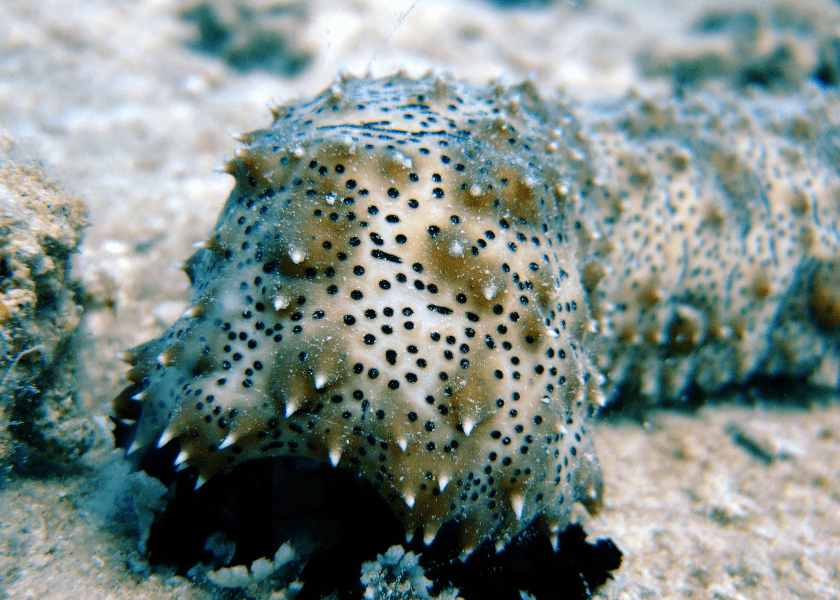 Sometimes referred to as a sea pudding, these marine animals have more to them than meets the eye: here are 7 facts about them you probably don’t already know.

1. Sea cucumbers are crucial to the marine food web. They trundle along the seafloor mixing the sediment and recycling detritus. These animals act like vacuums, decomposing organic matter, and converting it into recyclable nutrients. They shift through the sand for edible morsels of plant matter or bacteria and help reduce ocean deoxygenation, a critical yet under-reported side effect of climate change.

2. Holothuria parvula – or the golden sea cucumber – is unusual. It can reproduce by its body splitting in half. In the summer months, you can find these golden beasts undertaking their reproductive feats in Bermuda’s shallow waters.

3. Their rigid bodies can deform as a result of stress, and some species can expel their internal organs to trip up prey and then quickly regrow them.

4. The sea cucumber is part of the echinoid family, which includes invertebrates that inhabit the ocean floor, such as sand dollars, starfish, and sea urchins.

5. Their growth rate is entirely dependent on their environment. If a sea cucumber is starving, it begins to eat itself, gradually becoming smaller and smaller.

6. Sea gardeners might be a more accurate name for these creatures. Research shows that sea cucumbers’ presence leads to more productive seagrass beds due to spreading the nutrients throughout the ocean floor. They also help provide the raw materials that corals need to grow their exoskeletons by dissolving calcium carbonate and then expelling it back out into the water.

7. There are some 1,250 known species of sea cucumber. The growing invertebrate fishing industry targets over 30 of these species to satisfy the rapidly increasing demand.