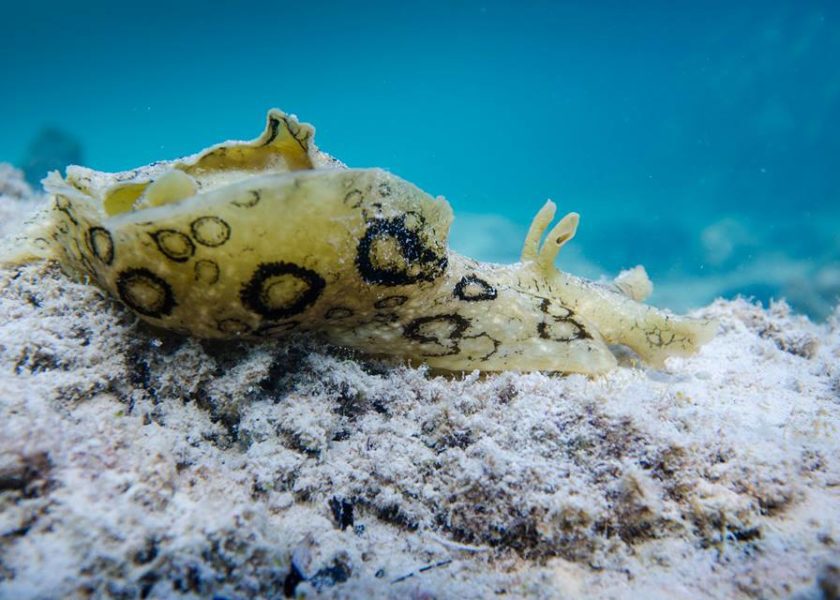 These marine gastropods are some of the largest sea slugs in the ocean. They look like hardly more than a clump of fabric underwater, but upon closer inspection, divers will find the billowing body of the sea hare, which appears to have a little snout and two ‘rabbit ears,’ giving it its name. The sea hare (Aplysia dactylomela) can commonly be found in tide pools or seagrass beds. Another popular spot is the reefs off of Fort St. Catherine.

1. The sea hare can reach 16cm when it is fully grown. Though it is a type of snail, it has no visible shell – instead, its body has completely outgrown and covered its fragile internal shell.

2. The sea hare has mantle flaps that it uses for swimming occasionally, however, it spends most of its time crawling on the sea bottom. It’s possible that sea hares may swim in order to find better feeding grounds or to get away from predators.

3. Sea hares spend most of their time grazing on red algae in seagrass beds, which is where they get their toxicity from. They mostly graze at night in order to avoid predators.

4. The biggest predator to sea hares are other sea slugs. They may also be eaten by green turtles, and their larvae are eaten by fish, but their toxicity makes them a poor target for most predators.

5. Sea hares possess both male and female sex organs, but they cannot fertilize themselves. They lay eggs in long strings inshore, and when they hatch, the free-swimming algae will only settle and develop if a large concentration of red algae can be found.

6. When threatened, the sea hare may release a supply of purple ink. This ink will stain clothing but is not harmful to touch. It is thought to taste foul to the sea slug’s would-be predators, causing crabs to clean themselves, and for fish to swim away quickly after exposure.