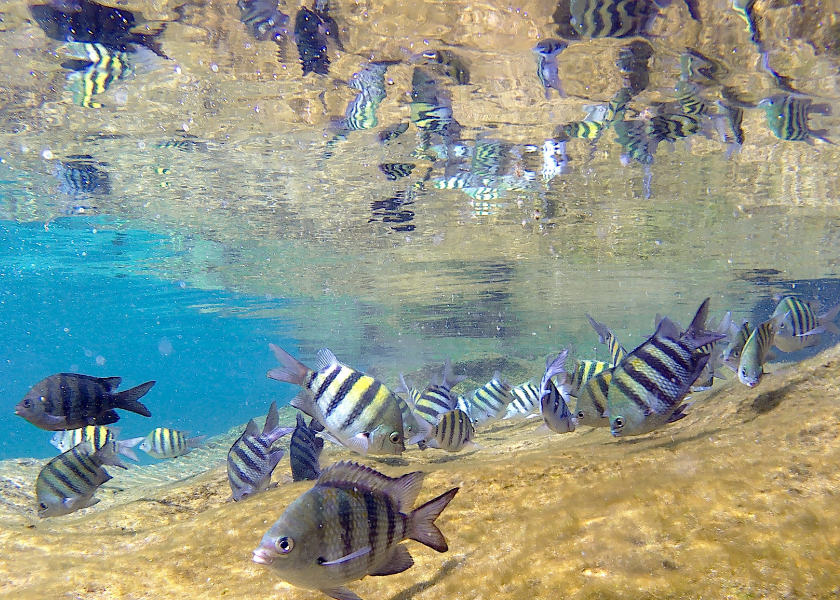 Sergeant Majors are a kind of damsel fish that are commonly found in Bermuda waters. You’ll now have 6 interesting facts at hand the next time you spot one in a tide pool or snorkeling.

2. These adaptable fish have colour changing ability: You can tell what stage and age the fish is at due to it’s colouring. It uses the skill of camouflage as well: When it is in a sandy or reef area it will remain a shade of silver-grey with yellow on its upper sides, but if it’s hiding in a cave, it can become a darker grey-blue.

3. Sergeant Majors are inclined to travel in schools when feeding. Their colour attracts other fish and sea creatures.

4. Lots of tiny teeth allow this fish to have a variety of choice for their meals including small crustaceans, algae, other fish and invertebrate larvae.

5. Their mating ritual is distinct: To prepare a nest, they select a site and clear the area. Then they begin a mating dance involving rapid swimming and feisty fin movements. The male may also change colour, turning darker with white blotches. At dawn, the spawning will begin.

6. Though you’ll see them most often as tiny juveniles, a Sergeant Major can grow up to nine inches long.