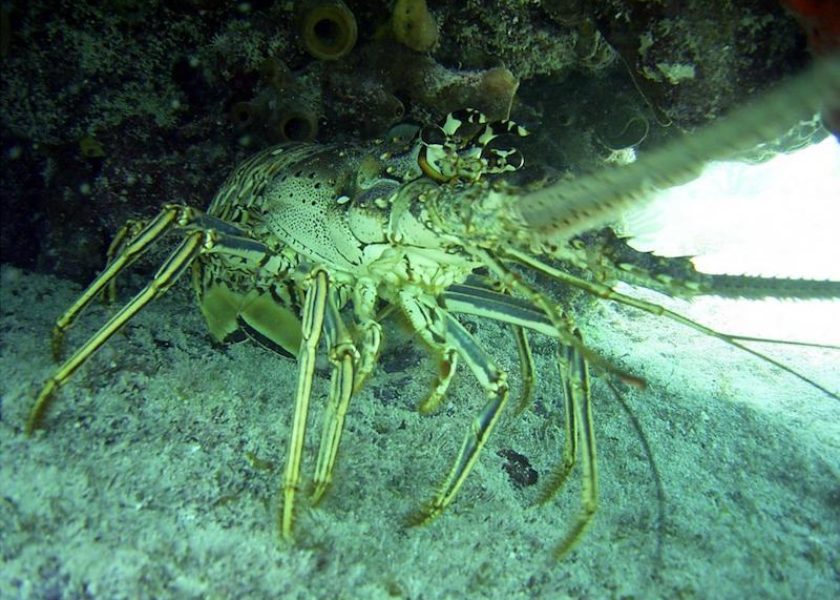 The first of September marks the start of lobster season in Bermuda, when it is legal to possess, hunt (so long as one has a permit) and consume the sweet meat of the spiny lobster. Between September 1st and March 31st, spiny lobsters are hauled from the ocean floor and prepared a number of ways to the delights of salivating locals and visitors. While most of us are well acquainted with the flavor of the spiny lobster, how much do we really know about the clawless crustacean? Here are several facts about the spiny lobster.

1. Spiny lobsters get their name from the forward-pointing spines that cover their bodies to help protect them from predators. They vary in color from almost white to dark red-orange. Two large, cream-colored spots on the top of the second segment of the tail make spiny lobsters easy to identify. They have long antennae over their eyes that they wave to scare off predators and smaller antennae-like structures called antennules that sense movement and detect chemicals in the water.

2. Adult spiny lobsters make their homes in the protected crevices and caverns of coral reefs, sponge flats, and other hard-bottomed areas.

3. The lobsters spawn from March through August and female lobsters carry the bright orange eggs on their undersides until they turn brown and hatch. Larvae can be carried for thousands of miles by currents until they settle in shallow nearshore areas among seagrass and algae beds. They feed on small snails and crabs. The lobsters are solitary until they reach the juvenile stage, when they begin to congregate around protective habitat in nearshore areas. As they begin to mature, spiny lobsters migrate from the nursery areas to offshore reefs.

4. Lobsters stay in their dens during daylight hours to avoid predators, emerging a couple of hours after dark to forage for food. While lobsters will eat almost anything, their favorite diet consists mostly of snails, clams, crabs, and urchins. The lobsters return to the safety of their dens several hours before sunrise.

5. It takes a spiny lobster about two years to grow to the three-inch carapace legal-harvesting size and they can grow as large as 15 pounds.

6. As it grows, a spiny lobster molts and loses its hard protective exoskeleton. After molting, the lobster is soft-bodied and very vulnerable to predators for about two days until its new, larger exoskeleton forms over its growing body.

7. Spiny Lobsters are a favorite food of sharks, rays, groupers, triggerfish, moray eels, sea turtles and octopus. They are also a favorite food of humans. In Bermuda and other places around the world they are a source of income for commercial fishermen.