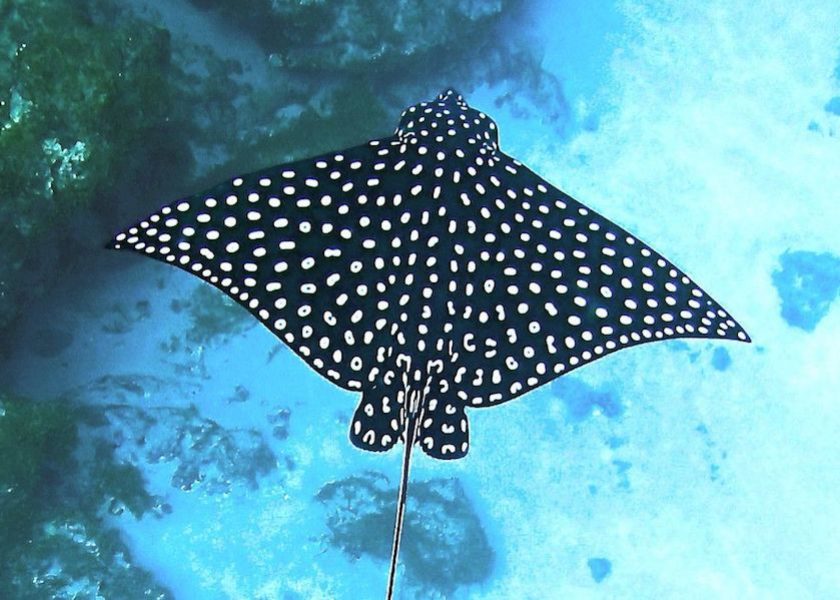 Seeing a spotted eagle ray, no matter how many times you’ve done so before, is always special. Their long thin tails, beautiful triangular wings and spotted backs make this species of ray visually unique and seeing them fly out of the water is a magnificent sight. Cruising sandy bottoms looking for food, eagle rays are most commonly seen in Flatt’s Inlet. Here are 8 other facts about spotted eagle rays we’re betting you probably don’t already know:

1. The beautiful markings present on spotted eagle rays are unique, and can be used by scientists to identify different individuals in much the same way as a human fingerprint.

2. Rays feed by burrowing their shovel-shaped snouts into the seabed and searching for buried mollusks, often leaving clouds of sand in their wake.

3. Rays do not have teeth, but rather flattened dental plates, which are useful to crush mollusk shells. In Bermuda, common prey includes clams and conchs.

4. Rays can be seen jumping out of the water, and there have been more than a few incidences of rays coming in to contact with humans as they launch themselves onto a boat. The reasons for their behaviour are unclear, with scientist explanations ranging from the rays wanting to shake off remoras or parasites, to the rays simply wanting to leap for fun.

5. Eagle rays have several venomous barbs behind their pelvic fins, at the base of their whip-like tail. However, rays are shy and seldom come in to contact with humans. They are not dangerous unless they are caught and handled incorrectly.

6. Rays are ovoviviparous, meaning that they are egg laying, but give birth to live young as the eggs hatch internally within the female. Young rays look like miniature copies of the parent, and are produced in litters of up to four at a time.

7. From 2010, the spotted eagle ray was classified as a protected species in Bermuda, and anyone who catches or kills one of the rays could face a $25,000 fine, or two years in prison.

8. Rays are preyed upon by sharks, but are threatened worldwide by overfishing.