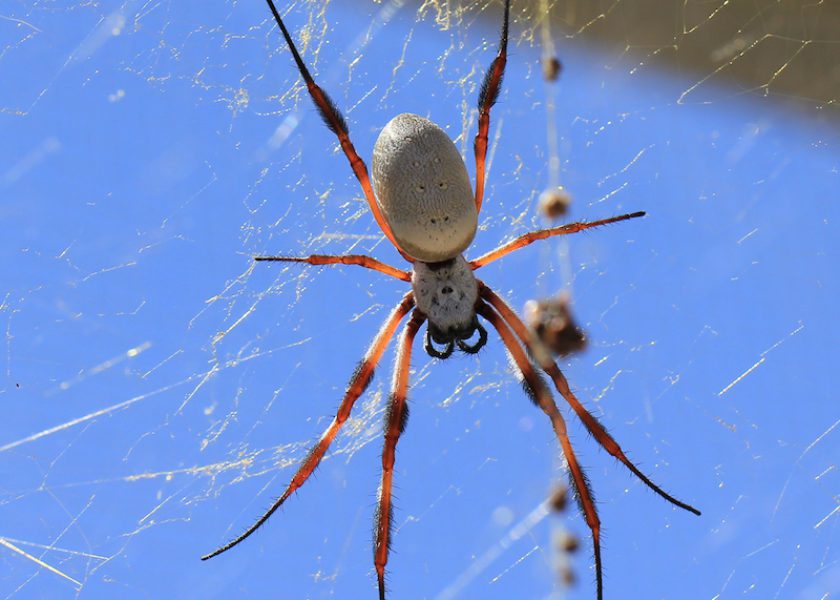 The Hurricane Spider, or Golden Orb-Weaver as it’s officially known is a master at web construction. It builds conspicuous webs in trees, sometimes spanning narrow roads and although hurricane spiders feed on a variety of insects, their webs have been known to trap small birds. Here are 7 facts about Hurricane Spiders you probably don’t already know.

1. Hurricane spiders vary from reddish to greenish yellow in color with distinctive whiteness on the abdomen. Most of them have have striped legs specialized for weaving (where their tips point inward, rather than outward as is the case with many spiders). Their contrast of dark brown/black and green/yellow allows warning and repelling of potential predators to whom their venom might be of little danger.

2. Female hurricane spiders can grow up to 5 inches, with males being about 2/3 smaller. In 2014, a study discovered that hurricane spiders living in urban areas, particularly areas of a high socioeconomic status, grew larger and carried more eggs than those in their native habitats. A number of possible explanations were suggested, such as increased food supplies due to artificial light or lack of predators and parasites.

3. Hurricane spiders are the oldest living spider, with fossils discovered from 165 million years ago.

5. The yellow silk of the hurricane spider’s web gives the golden orb its name. The silk appears golden when it shines in the sun and the webs are extremely complex. They can be as wide as one meter across. The yellow coloring serves two main purposes, according to scientists: First, the sunlit web attracts and traps bees that are drawn to the bright silk strands. Second, the color blends in with natural foliage, acting as camouflage in darker and shadier conditions. The spider starts by building a non-sticky spiral and then fills in the gaps with sticky silk. The banana spider can vary the color of the web to maximize its effectiveness in terms of background light and color. The web needs regular maintenance in order to keep it effective for ensnaring prey.

6. There have been several attempts at making clothing from the silk of the hurricane spider. At the Paris Exhibition of 1900, for example, there were two bed hangings created and put on display. In 2004, a shawl was produced by a textile designer (Simon Peers) and an entrepreneur (Nicholas Godley), which used the silk from golden silk weavers collected in the wild. It took over three years to finish and the shawl was exhibited at the American Museum of Natural History in 2009. Although not clothing, fishermen in the Indopacific Ocean make balls with the spiders’ silk. After being tossed into the ocean, the balls unravel and form a net to catch fish.

7. Hurricane spiders are predators and considered to be helpful in a healthy garden, mostly because they consume mosquitoes, flies, small moths, grasshoppers and stink bugs.