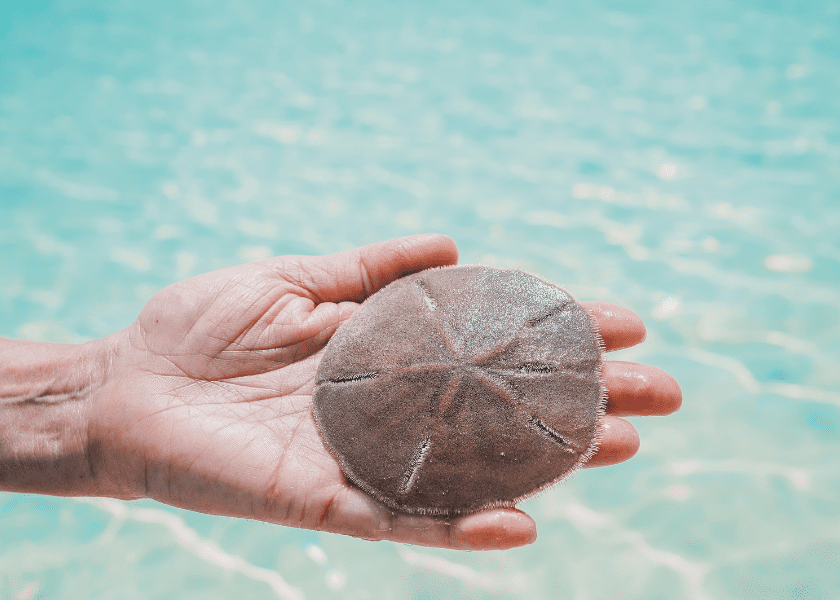 While they’re not common per say, it is possible to find sand dollars in certain areas of Bermuda but how much do we know about the ocean-floor dwelling echinoid? Here are 8 facts about sand dollars you probably don’t already know.

1. While the sand dollar casts we usually see sold in gift shops are white, when alive, sand dollars are actually purple in color and covered in tiny bristles. It is only when they die that their skeletons are bleached by the sun and their small spines fade away.

2. As if the the star-shaped pattern on the top of a sand dollar isn’t hint enough, star fish, sea urchins and sea cucumbers are all cousins of the sand dollar. They are part of the echinoid family, which include invertebrates that inhabit the ocean floor.

3. Those tiny bristles we’ve already mentioned are key to a sand dollars survival. They enable the creature to eat (mostly crustacean larvae and algae) by ferrying food particles along their bodies to a central mouth on their bottom side. A sand dollar’s mouth has a jaw with five teeth-like sections to grind up food. It can take up to 15 minutes for a sand dollar to thoroughly grind up food before swallowing and another two days for the food to fully digest.

4. Like a sea urchin, the sand dollar has five sets of pores that are used to move water into its internal vascular system, allowing for movement. When water is still, a sand dollar may stand on one end with the other end buried in the sand; when the water gets rough, sand dollars can bury themselves in the sand to hold their ground. Young sand dollars may even swallow grains of sand to weigh them down in rough conditions.

5. While in Bermuda, we typically only find one or maybe a couple sand dollars living in one area, but more commonly, sand dollars live in much larger groups. The Monterey Bay Aquarium says as many as 625 can live in just one square yard.

6. Sand dollars have few predators, mostly because their touch exteriors make them difficult to snack on.

7. Like a tree stump, you can count the rings on a sand dollar to tell how old it is. Typically, sand dollars live between six and ten years.

8. People thought the deceased white sand dollars resembled silver coins, which is how the sand dollar got its name.