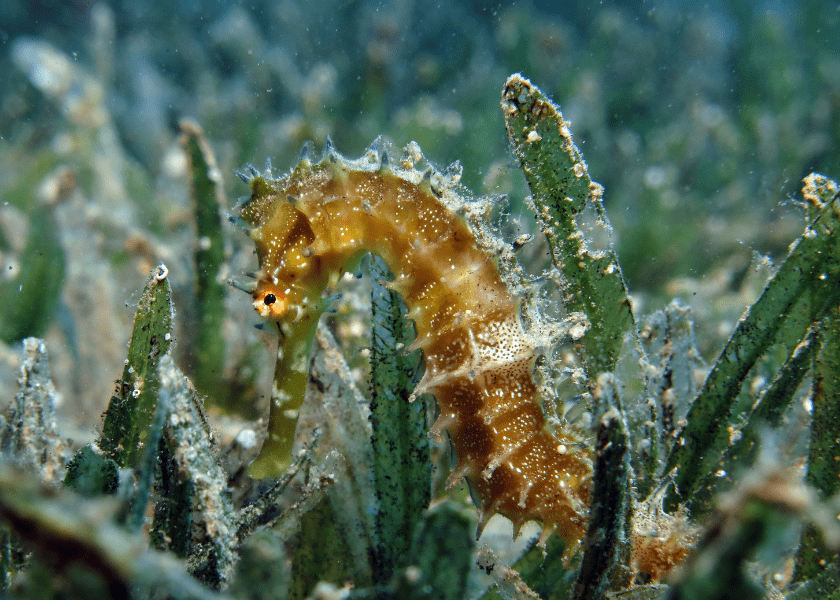 These fascinating little creatures are hard to spot, but with a keen eye, can be discovered tucked into algae, sponges, and mangrove tree roots. There are two known species of seahorse in Bermuda waters: the Slender Seahorse (Hippocampus reidi) and the Lined Seahorse (Hippocampus erectus). Here are six facts about these underwater wonders we’re betting you don’t already know.

1. Seahorses are fish. They live in water, breathe through gills, and have a swim bladder. But they don’t have scales and aren’t swimmers; in order to travel in water, they rely on their dorsal fin beating at 30-70 times per second.

2. Seahorses mate for life. According to the Seahorse Trust, they meet first thing in the morning to reinforce their pair bonding with an elaborate courtship display. The female meets the male in his territory and as they approach each other, they change colour. The male circles around the female and the pair often spiral around an object. This display can last for up to an hour.

3. The seahorse has a diet consisting of lots of tiny shrimp. They eat their food through their expandable snouts that suck it up like a vacuum cleaner. They are unable to chew!

4. The ‘prehensile tail’ such as those of monkeys and chameleons are round and cylindrical. But the grippy tail that allows the seahorse to hold onto mangrove roots or seagrasses is, in fact, a square prism made up of plates of armour.

5. It is true that the male seahorse carries the pregnancy. Giving birth can be a long process for him, with contractions known for lasting up to 12 hours.

6. The Latin name for seahorse is Hippocampus which means “Horse Caterpillar”