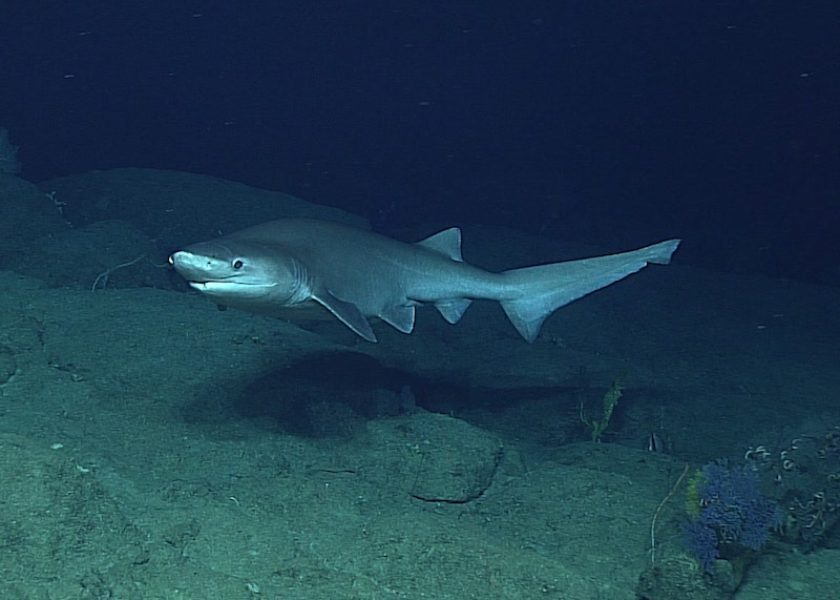 Although it’s incredibly rare to encounter sixgill sharks, there is reason to believe that there are more of them in Bermuda’s waters than any other species. Sixgill sharks have very distinct features and live in the dark depths off Bermuda’s shores, only migrating up to shallower waters to feed. Here are 5 facts you might not already know about the elusive creatures.

1. The sixgill shark, or Hexanchus griseus, is a common species of deep water shark. It is also one of the largest sharks that feed on prey other than plankton. This shark gets its name from the fact that is has six gill slits, unlike most other sharks which have only five.

2. One of its most distinguishing characteristics is the fact that it has only one dorsal fin, which is located on the back of its body near the tail. Most other sharks have a pronounced dorsal fin on their backs near the center of their bodies.

3. Although sixgill sharks are usually slow and sluggish, their body structure allows them to attain high bursts of speed when chasing and catching their prey. They are carnivorous predators, feeding mostly on cephalopods, crustaceans, fish, and rays, and some marine mammals. These sharks spend most of their time in deep water during the day. At night, they undertake vertical migrations up to shallower waters to feed. During this time, it is not uncommon for them to come in contact with divers, but they are not usually dangerous to humans unless provoked.

4. Due to the solitary lifestyle of sixgill sharks, very little is known about their reproductive behavior. Many biologists believe that they meet seasonally, moving to shallower waters between May and November to mate. Sixgill sharks are ovoviviparous, meaning that the eggs are carried within the mother’s body until they hatch. After hatching, still within the mother’s body, the young have been known to eat any unfertilized eggs and even each other. These young sharks, known as pups, are a little more than two feet (about 70 centimeters) in length when they are born. The color of the pups is lighter than that of the adults, allowing them a certain amount of camoflauge to help hide them from predators. There are between 22 and 108 pups born at any given time. Because of these large numbers, it is thought that there is an extremely high mortality rate among the pups and not many survive to maturity. Those that do survive are believed to live about 80 years in the wild.

5. Sixgill sharks have the widest distribution of all sharks, except for possibly the great white. They are found all over the world in temperate and tropical regions, where they have been known to dive as deep as 6,000 feet (over 1,800 meters). They are more typically found at depths of about 300 feet (90 meters). These sharks have been observed moving into water as shallow as 100 feet (30 meters) during parts of the year in some locations. It is not yet known why they do this. Since they do venture into shall water, fishermen are killing them for sport and food. Because of their low reproductive rate, they can easily be overfished. This has achieved them a near-threatened status on the global list of endangered species. But because we know so little about their populations, many scientists believe they could be in even more danger of extinction.