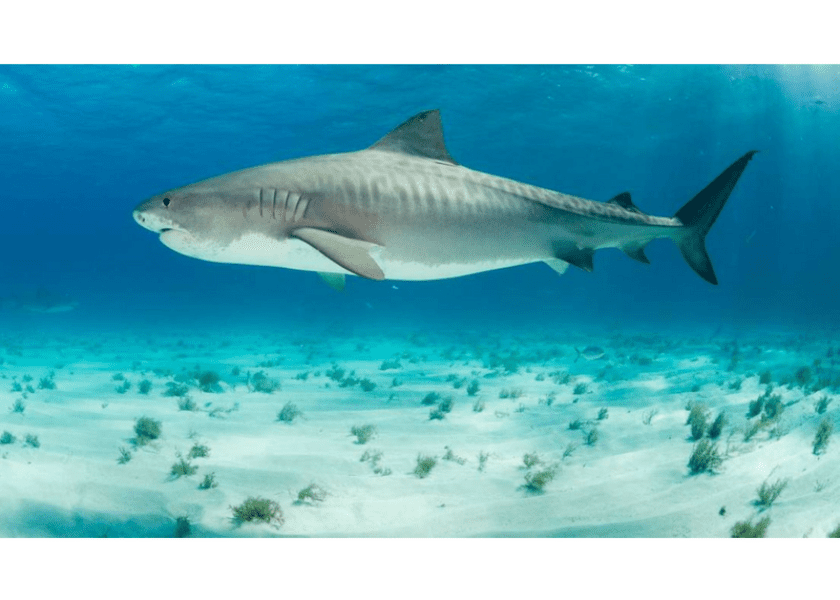 The tiger shark is the fourth-largest shark – only beaten in size by the whale, basking and great white sharks – weighing in at 1300 pounds and reaching up to 15 feet in length. Of Bermuda’s shark populations, perhaps the tiger is what we’re most familiar with (even if most of us have never seen one) but how much do we really know about these striped swimming giants? Here are 10 facts about tiger sharks.

1. They are Swimming Garbage Disposals
Tiger sharks will eat almost anything. Sure, they feed on birds, turtles, fish and other sharks but they’ll also indulge in manmade objects. Remember the scene from Jaws, where a license plate is pulled from the stomach of a dead shark? That is scientifically possible.

2. Not every Tiger gets his Stripes
Think of a tiger shark and think of the dark vertical stripes that line its side but did you know that baby tiger sharks are actually covered in spots that evolve into stripes as the tiger shark grows. After a certain age though, the stripes start to fade, becoming barely visible in mature tigers.

3. They like it Hot
Tiger sharks are very particular about water temperature. Their preference? About 80 degrees farienheit – lower temperatures are too cold for them, which is probably why we see more tigers in the summer in Bermuda than we do in the winter.

4. They have Huge Litters
The gestation period for a tiger shark is between 14 and 16 months and female tigers birth at least 10 pups at a time with 30 being the average. There have been reports of female tigers birthing up to 80 pups, with each pup weighing between 6 and 13 pounds each!

5. There’s a Pecking Order
Between shark species, there’s certainly a pecking order, especially when it comes to meal time. In Bermuda, the tiger shark reigns supreme and when feeding time begins, the tiger is the one who takes the first bite.

6. They have Incredible Teeth
If you’ve seen the jaws of a tiger, you will have noticed that their teeth are jagged and point sideways. This allows for the tiger to grasp struggling fish and also shear through the thickest of hides, meaning that the tiger is the ultimate predator and can eat just about anything.

7. They Hunt Sea Turtles
Tiger sharks may be the only sharks to hunt sea turtles regularly but that doesn’t mean that turtles are an easy catch. According to a 2016 study, sharks tend to avoid healthy turtles and instead conserve energy but going after sick, dying or already dead turtles.

8. They Migrate
Tiger sharks aren’t in Bermuda’s waters year-round. In fact, they tend to spend their winters in the Caribbean and west indies but embark on missions to the mid-Atlantic in the summer, to enjoy the optimal 80 degree Fahrenheit water temperature. Once the water temperature starts to dip below 80 in Bermuda, the tigers make their way back down south.

9. They have Special Powers
Native Hawaiians believe that tiger sharks are sacred reincarnations of deceased family members and that their eyes have special powers that give them the gift of clairvoyance.

10. They are Under Siege
Historically, humans have hunted tiger sharks in an effort to protect tourism but that isn’t the only reason tigers are culled, they are also sought for their meat and fins. The International Union for the Conservation of Nature (IUCN) Red List of Endangered Species designated the tiger shark as a near threatened species. Due to sharks culling, finning, and fishing and their slow reproductive and maturation rates, they could someday become extinct.