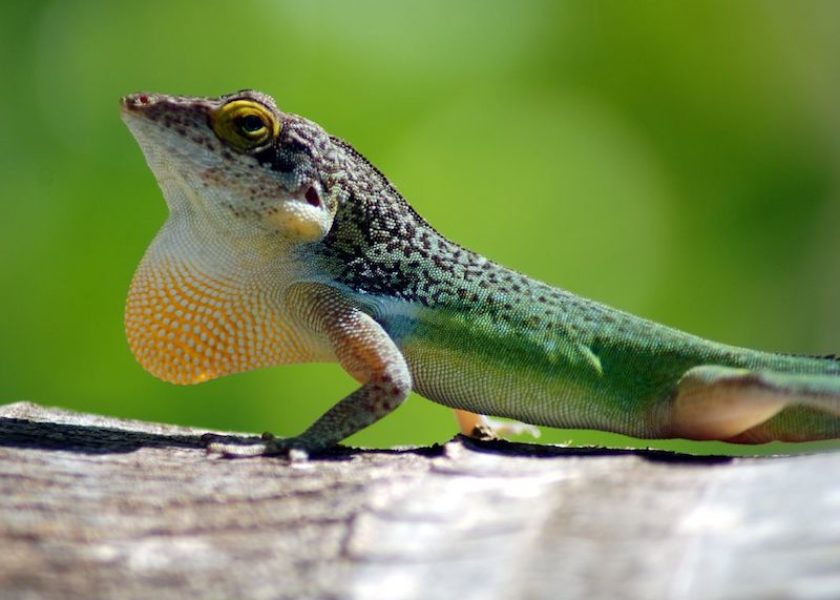 Although Bermuda may be better known for its plentiful marine life and large variety of birds, the island is also home to four species of lizards. Most locals are familiar with the famed Bermuda Skink as it is endemic to Bermuda but a neighbour of the Skink, the Warwick Lizard, is a creature we should all know and recognise — here are 7 facts to get you better acquainted.

1. The Warwick Lizard is formally known as an Antiguan Anole (Anolis Leachii) or Leach’s Anole. It is native to Antigua and Barbuda and was accidentally introduced to Bermuda from the Caribbean. It was first observed on the island around the 1940s.

3. Bermudians named it the Warwick Lizard as it was most frequently seen in Warwick and Paget. But unlike the Somerset Lizard, which is only found in Sandys, the Warwick Lizard has successfully spread to cover most of the island.

4. Some locals aren’t too fond of the Warwick Lizard due to its size — it is quite a large reptile. A fully-grown male can reach up to 14 inches (35cm). The females are a bit smaller.

5. This Anole is a strong predator, but has a weakness and susceptibility to cold winter weather. The Warwick Lizard tends to dominate the other two Anoles found on the island (the Somerset Lizard and the Jamaican Anole), largely due to its size and feisty attitude.

6. The Warwick Lizard’s appearance includes distinct golden eye rings. Male lizards are yellow-green with a white stripe on the sides and brown specks on their heads, whereas females have chevron markings down their back. Like all Anoles, the Warwick Lizard has a dewlap (retractable fan) that is used to attract a mate or ward off any unwanted predators.

7. This lizard can eat larger insects and unfortunately, it tends to enjoy Eastern Bluebird eggs.