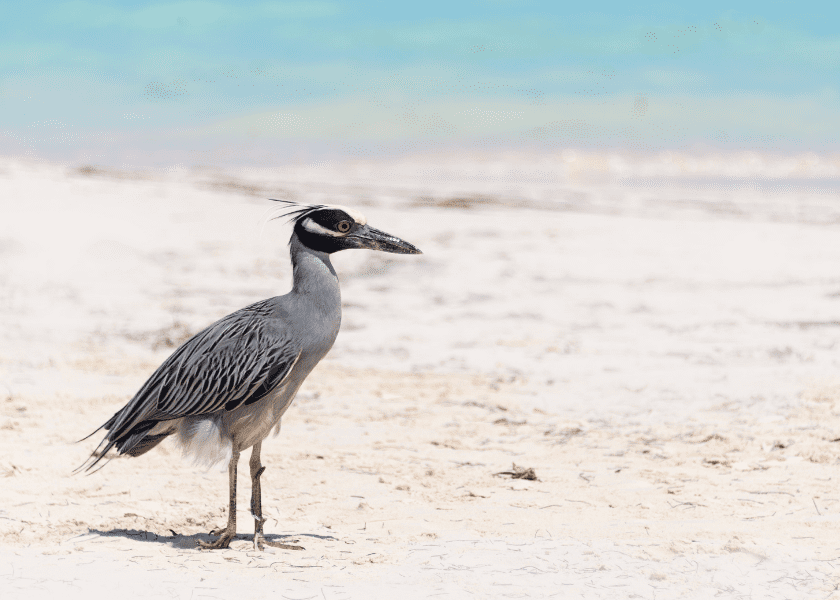 Yellow crowned night herons are some of the most common large birds in Bermuda. You can spot them wading in the shallows by the edge of a pond or the ocean, hunting for fish and crabs. Here are 7  other facts about them you probably don’t already know!

1. The yellow crowned night heron actually feeds all night and day, grazing anywhere they might find a tasty prey item – on rocky coastlines and between mangroves as well as trimmed golf courses and lawns.

2. Yellow crowned night herons were introduced to Bermuda by Dr. David Wingate in order to restore balance to Bermuda’s ecosystem. Through his fossil research, it was clear that a similar night heron was part of Bermuda’s historic forest – a species which likely met the fate the cahow almost did; hunted to extinction by human settlers.

3. The first herons were reared by hand on Nonsuch Island on a diet of land crabs, which were abundant at the time. The crabs’ population explosion was due to their lack of predation by this extinct night heron.

4. The extinct herons had shorter legs, which were more suited to terrestrial hunting, and a wider bill, which would have enabled them to swallow land crabs with ease. The yellow crowned night heron eats crayfish in its native range, but in Bermuda preyed upon land crabs

5. Yellow crowned night herons are colonial nesters, meaning that they are triggered to nest when they see other birds doing so. Though they usually like to nest very far away from people, the tangled Bermudian thicket enables them the privacy that they need.

6. They create a large twiggy nest and lay 3 to 4 eggs. Immature birds are brown and weedy compared to the slick, silver mature bird. Breeding season is from March to June with birds fledging in July and August.

7. The yellow crowned night heron is a good example of a positive biological control mechanism in Bermuda, along with the cane toad.

For more information on the Yellow Crowned Night Heron and the Land Crab, take a look at our interview with Dr. David Wingate.