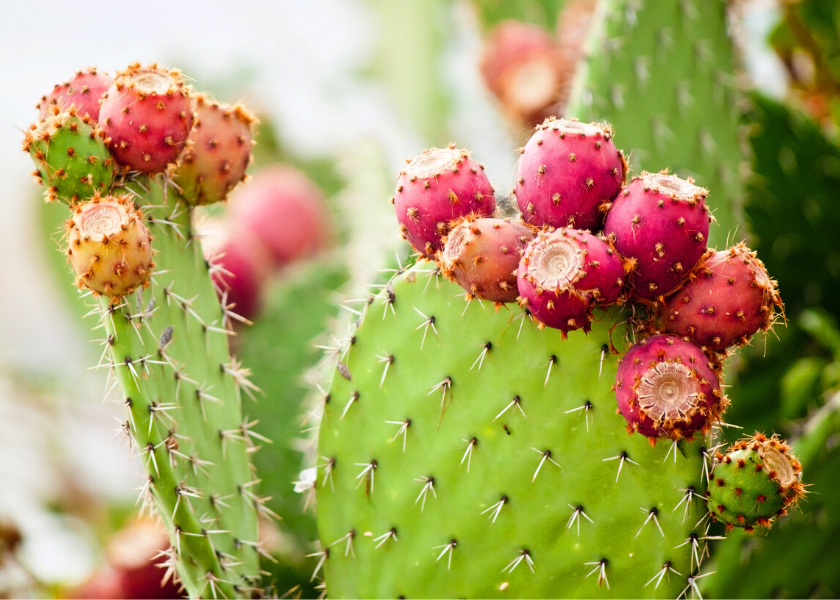 9 Bermuda Edibles to Forage and Enjoy

When the loquats come out in February, so do the old jam and preserving jars. Even though Bermuda’s typical lifestyle is now more suburban than rural, many of us still make loquat jam or chutney, not to mention loquat liqueur. And when the Surinam cherries are ready for picking, they too are transformed into jellies, while Bermuda’s oranges and lemons are excellent for marmalade.

Other less obvious fruits, plants and grasses growing in Bermuda are also edible in one form or another. Indeed, over the past four centuries, some had medicinal uses as well. Scurvy grass, for example, is excellent for providing vitamin C. Found all over the coastal areas of Bermuda, it has clusters of white or pale-yellow four-petal flowers, and as its name suggests, it was used as a medicine to prevent scurvy. The English physician Robert Turner apparently stated in the seventeenth century that scurvy grass, taken in ale, was a remedy for a range of conditions, including “ague.”

Plants were also used for dyes—the ubiquitous goldenrod, for instance, produced beautiful yellows and golds and oranges and browns, while the prickly pear was used for dyeing silk red or purple.

In this article, however, we will mostly concentrate on fruits good to eat or drink while giving you fun bits of history and information on the way. And since we are focusing on edibles, it is only fair to provide recipes but bear in mind these recipes date back to the early 1930s when women assumed that everyone would know how long to cook a concoction or at what temperature to bake a dish. Instructions, then, tend to be a little sketchy. If no temperature is given, 350º should be a safe bet. 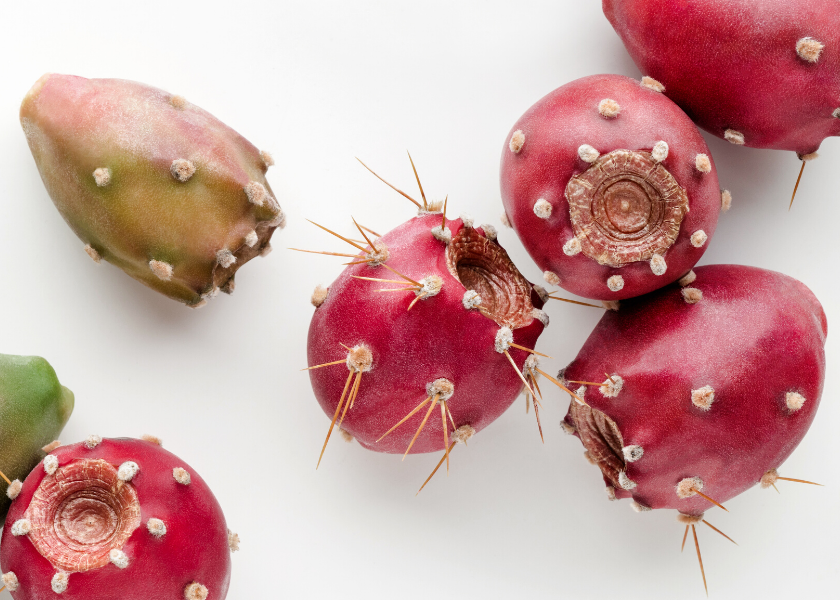 1. Prickly Pear (Cactus opuntia)
Jill Collett tells us that the prickly pear is Bermuda’s only native cactus. It has large spikes on its leaves with which girls used to pierce their ears (not a good idea!), and it has a reddish-purple fruit covered with fine prickles. However, as she points out, the prickles did not deter early settlers from eating them. “Silvester Jourdain described in 1613 a man who ate more than a peck (two gallons) of them in 10 hours and was none the worse for wear.” He might even have been all the better for such excessive consumption because today it is thought that the pectin contained in prickly-pear pulp lowers levels of “bad” cholesterol while leaving “good” cholesterol levels unchanged. Indeed, the pectin in the fruit may lower diabetics’ need for insulin. Both the fruits and pads of the prickly pear cactus are rich in slowly absorbed soluble fibres that help keep blood sugar stable. Perhaps St. David’s islanders knew this when they began to make a candy out of prickly pears in the nineteenth century. Here are some recipes by Terry Johnson featured in The Royal Gazette in 1973.

How to Prepare
Wash the fruit (wear gloves!). Cut off top and bottom. Slit the fruit from top to bottom. Peel off outer and inner skin. The fruit is now ready to serve.

Combine pears with next three ingredients in a saucepan. Heat for five minutes until thickened. Stir in rest of ingredients.

Blend on high and pour into two glasses. A little sugar may be added. 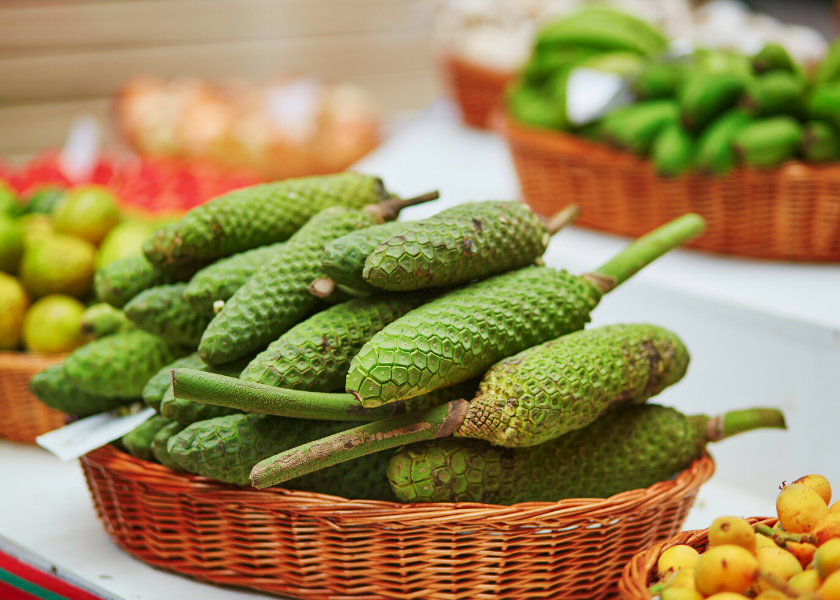 This fruit, native to Central America and Mexico, is downright eccentric for a number of reasons. Also known as the Swiss-cheese plant, its leaves have large holes and slits in them, making them less susceptible to wind damage; thus it has yet another common name: hurricane plant. It likes to climb trees by clinging to trunks with its aerial roots. The fruit is enclosed by a white flower and looks like corn because of its spikelike shape. It also looks like a cucumber covered with hexagon-shaped tiles. It takes about a year to ripen. How do you know it is ready for eating? Go ahead when the skin and tiles fall off, but they do not always fall off at once, so it can take a couple of days to eat the whole fruit. But beware the plant is toxic if you eat it before the tiles fall off! Placing it in a brown paper bag hastens the ripening process. It has a custard texture and tastes like a mixture of mango, banana, pineapple and vanilla ice cream. It is great for flavouring drinks and ice cream and is also high in potassium and vitamin C. 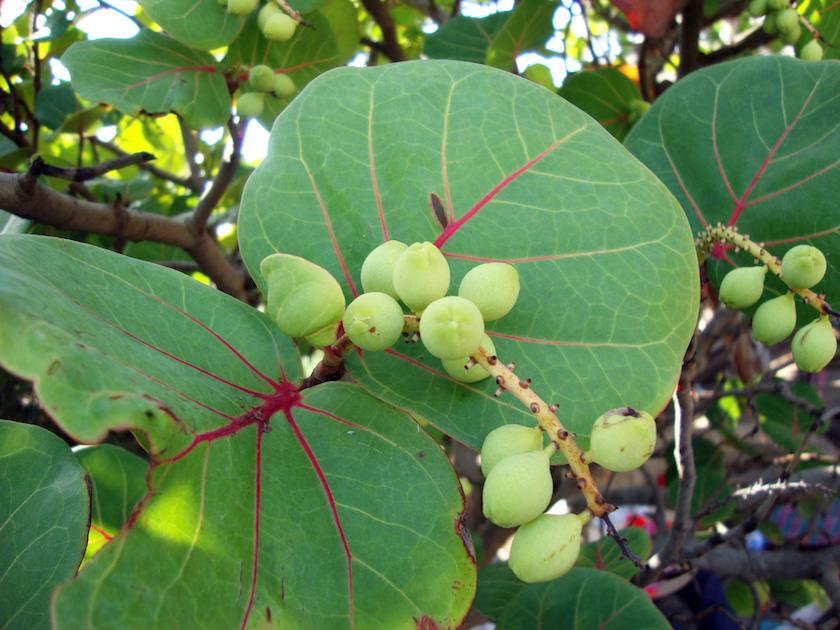 3. Bay Grape (Coccoloba uvifera)
Native to Bermuda, bay-grape trees add an autumnal touch to the landscape, albeit in the spring, when their large, platelike leaves turn to burnished browns, reds and golds. Children like these trees because the leaves make excellent Frisbees, while adults like them because the fruits make a delicious jelly. The following recipe comes from Bermuda’s Best Recipes, published by the Ladies Welfare Society in 1934.

Bay Grape Jelly
Boil berries until tender. Put through colander and then strain through cheesecloth. Add a cup of sugar to every cup of juice. Add juice of lemon. Stir while boiling. 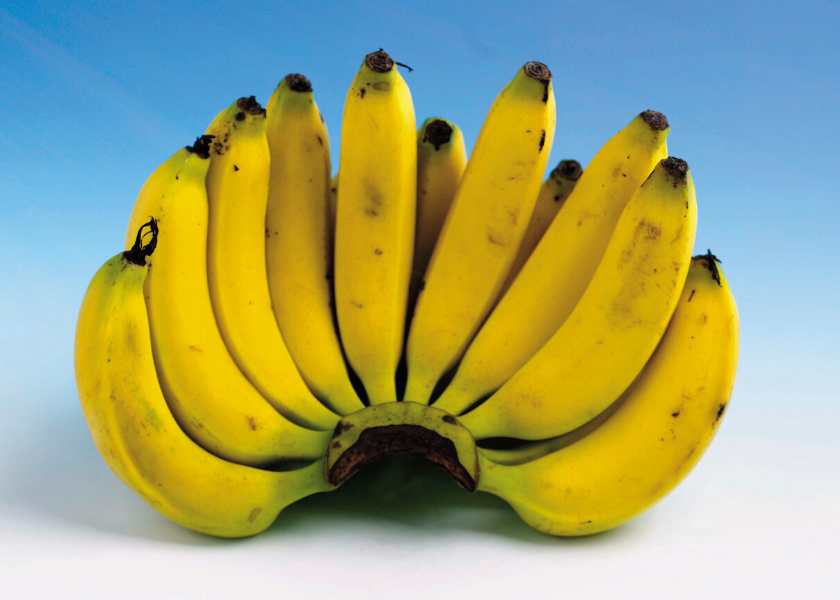 4. Banana (Musa x paradisiaca/Musa acuminata)
According to Jill Collett, the very first bananas to be displayed in a London (U.K.) shop in 1633 were from Bermuda, so they have been growing on the island from the early seventeenth century. Always a favourite edible, bananas have also been used for other purposes. Mattresses were stuffed with banana leaves and burns were healed with juice from the tree. Dried banana leaves are also an important material for making Bermuda dolls.

Many recipes exist for banana bread, but here we will give you something different, a recipe for a banana cupcake, again taken from Bermuda’s Best Recipes. 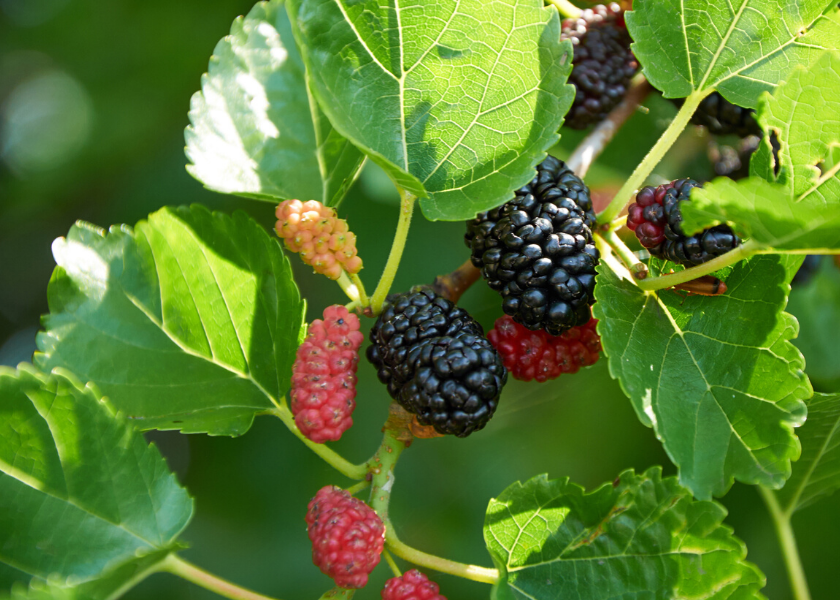 5. Mulberry (Morus nigra)
Well, here we go round the mulberry bush, the mulberry bush, the mulberry bush…. Mulberry trees were apparently on the island when the first settlers arrived. King James 1 of England (VI of Scotland) would have approved; sometime after his accession to the English throne in 1603, he pronounced a royal edict recommending the cultivation of silkworms and therefore of mulberries, offering packets of seeds to all who would sow them. He dreamed of silk, you see, material for the royal, rich and aristocratic. Unfortunately, the seeds were from the black mulberry tree, the leaves of which have little appeal for silkworms. (These critters like the white mulberry.)

Black mulberry seeds were sent to Daniel Tucker in 1616 with instructions on how to grow them. Although unappreciated by silkworms, black mulberry trees (one can be found in a garden on Wilkinson Avenue) have delicious, albeit messy, fruit, excellent for making wine. Here is a recipe taken from A Modern Herbal by Mrs. M. Grieve, published in 1931. (On a less romantic note, Mrs. Grieve also points out that the bark of the black mulberry was used for expelling tapeworms.)

Mulberry Wine
On each gallon of ripe Mulberries, pour 1 gallon of boiling water and let them stand for 2 days. Then squeeze all through a hair sieve or bag. Wash out the tub or jar and return the liquor to it, put in the sugar at the rate of 3 lb. to each gallon of the liquor; stir up until quite dissolved, then put the liquor into a cask. Let the cask be raised a little on one side until fermentation ceases, then bung down. If the liquor be clear, it may be bottled in 4 months’ time. Into each bottle put 1 clove and a small lump of sugar and the bottles should be kept in a moderate temperature. The wine may be used in a year from time of bottling. 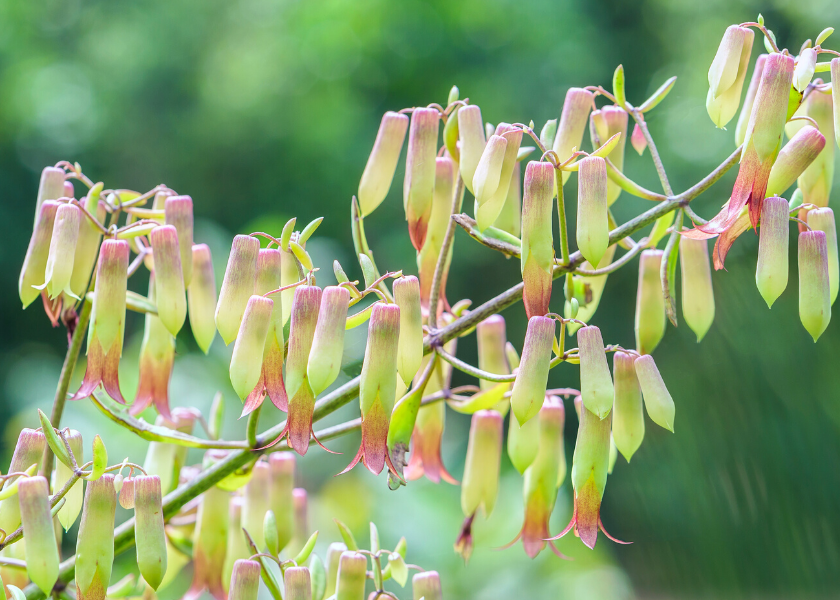 6. Flopper or Life Plant (Bryophyllum pinnatum)
Go for a walk anywhere on the island and you are almost certain to see floppers, but it has not always lived here. Jill Collett tells us it was originally from the Far East and was brought to Bermuda in 1813. According to Christine Watlington, it can be used to soothe a heavy chest cold. Press leaves for two to three ounces of juice. Add salt and put in a screw-top bottle. Take one tablespoon at night with a little more salt added. 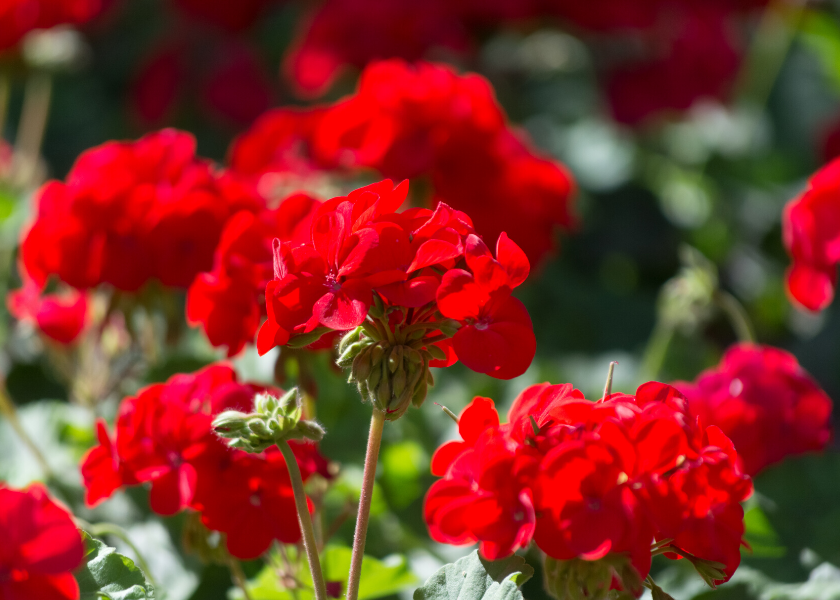 7. Geraniums (Zonal pelargonium)
Geraniums have been growing in Bermuda since the early nineteenth century. In Suzette Lloyd’s account of her visit to Bermuda in 1829, she describes eight- to ten-feet-high hedges of the flowers—they were trained up trellises. According to Christine Watlington, they too had practical uses. Ladies would use red petals as a substitute for rouge. Mixed with fat, the crushed leaves were a balm to heal sores. Even the roots were useful. Roasted, grated and pulverised, they could be taken to cure dysentery. 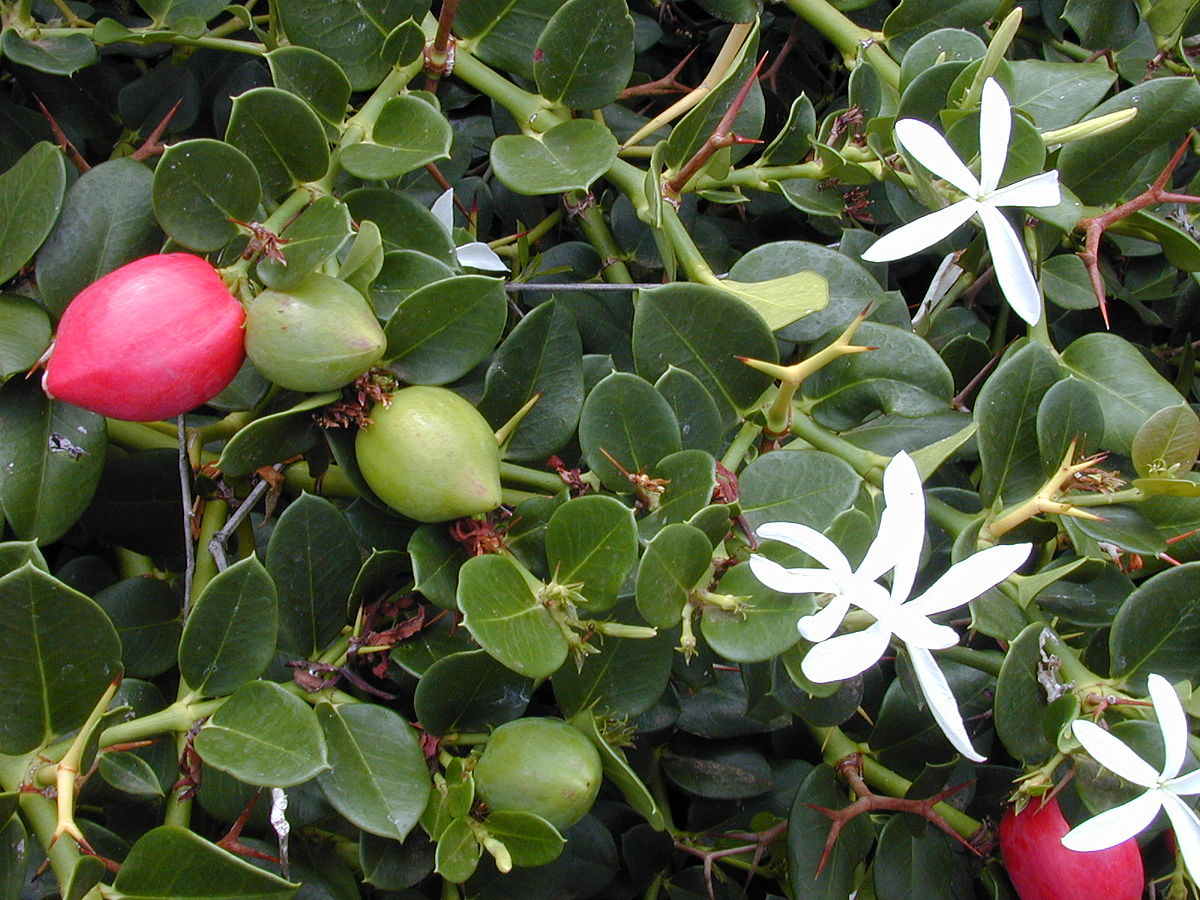 8. Natal Plum (Carissa grandiflora)
As its name suggests, this popular hedging shrub originates from South Africa. It is a very attractive plant although somewhat intimidating, thanks to the forked spines on its stems. Its white star-shaped flowers are very fragrant and contrast with the lustrous dark-green leaves. The plums are ripe when they turn a rich magenta red. Delicious raw—their flesh is very juicy—they can also be used to make excellent jellies. Natal plums are also good for you, being high in vitamin C. 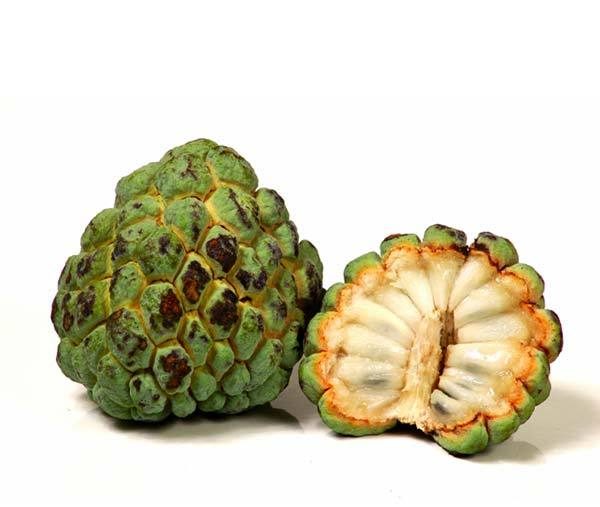 9. Sugar Apple (Annona squamosa)
This is a decidedly odd-looking fruit because it is covered with large green knobs that fall off when the fruit is ripe. The flesh resembles and tastes like custard, which is why it is also known as the custard apple. Native to tropical America, it certainly was in Bermuda by 1829 because the ever-observant Suzette Lloyd noticed it.