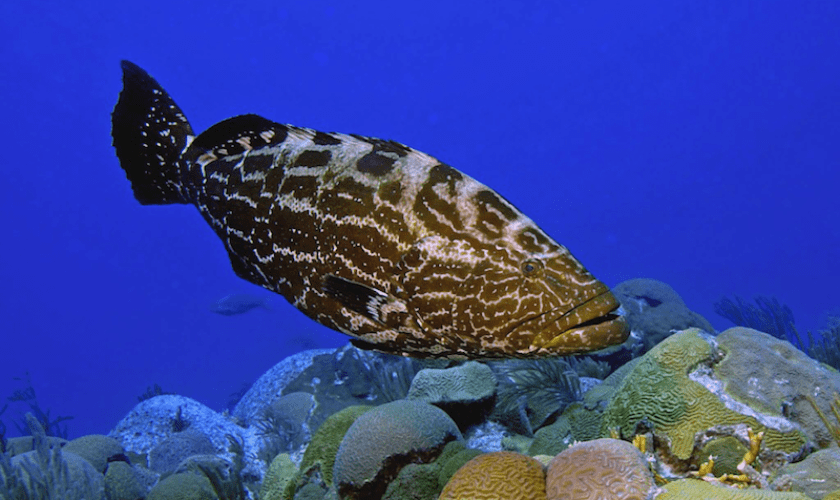 In a report released earlier this year, Bermuda Reef Ecosystem Analysis and Monitoring (BREAM) director Dr. Thaddeus Murdoch painted a picture of the health of Bermuda’s reefs. Though in some areas we are doing worse than previous years, in many others our reefs, the northernmost in the world, appear to be thriving.

The report found that predatory fishes, such as snappers and groupers, were at critically low levels compared to baselines in 2015 data. Though many of us can point to locations on island where curious-eyed snapper are abundant, many of the fish do not reach sexual maturity before they become a victim of overfishing, which means that their numbers continue to dwindle.

Groupers used to be an integral part of every reef on island, but now snorkelers can go their whole lives without seeing a single one. It’s often a cause for celebration and amazement when a red hind or coney, smaller cousins of the black grouper, are spotted. The lack of predatory fishes on the reef imbalances the reef ecosystem by letting populations of other fishes get out of control. While predatory fishes usually target weak or sick prey, these fish are now growing to adulthood and passing on less-than-ideal genes, which could increase fish disease.

Predatory fishes also act to regulate other types of fish that, in high numbers, can decimate a reef. Another aspect of the BREAM report highlighted that coral-killing damselfish populations have skyrocketed in the absence of predation, leading to a reduction in coral coverage. These feisty little fishes clear out sections of the reef of coral to create their own algae farms from which to feed. Though low levels of this activity are sustainable, an increase in damselfishes makes it dangerous. On one level, an overall increase in herbivorous fish is positive, but it does not necessarily mean that a reef is healthy, as indicated by the BREAM report.

Coverage of fleshy microalgae was shown to have increased significantly, which negatively affects our reefs. Algae competes with coral for sunlight, and if algae-eating organisms do not keep it in check, it threatens to overwhelm the reef and turn it into a knot of green scum. In many areas where climate change is affecting the ability of corals to retain their symbiotic zooxanthellae, algae has overwhelmed reefs, covering dead coral skeletons in growth.

The BREAM report noted a drastic reduction in snail and hermit crabs. Though the survey was marine, mainly focusing on redbanded and verrill’s hermit crabs and other microherbivores, many Bermudians may remember the large land hermit crab. The dynamic crustaceans are certainly a staple of island life, but when early settlers decimated the West Indian top shell population, hermit crabs could no longer utilize their shells to live inside, and their population plummeted. After this time, the crabs used fossilized top shells or human garbage for shelter. Now that West Indian Top Shells are thriving again, it is hoped that hermit crabs will be able to return to their previous levels. They also use the ocean to breed, starting their life in the water.

Overall, the BREAM report provides hope for our reefs, when in many areas populations of organisms that have a positive effect on reefs increased from the previous year, and organisms that had a negative effect on reefs decreased from the previous year. It is imperative that these trends continue, in order to ensure the health of our reefs, which could end up being the last in the world.

The BREAM project was started in 2002, and local and international researchers have worked to map all the marine habitats of Bermuda, and collected baseline data from which to measure the reefs against during subsequent years. BREAM hopes to involve the public in the appreciation of our beautiful reefs, and to emphasize the importance of coral health and fish abundance for Bermudians.