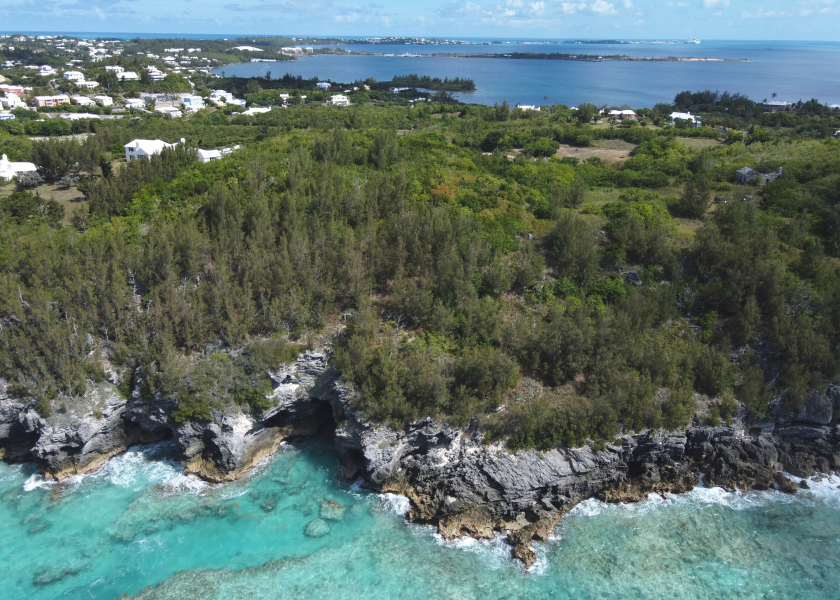 Buy Back Bermuda, a joint initiative of the Bermuda Audubon Society and the Bermuda National Trust, began its mission in 2004 when it bought Somerset Long Bay East, saving it from being swallowed by 22 new condominiums. Its aim was and is to create a “green necklace” of natural open spaces across the island so that Bermuda’s wildlife, particularly birds, can have stopping places or refuges from the relentless urban development so characteristic of the twentieth and twenty-first centuries.

By April 2022, it added two more links to the necklace: the Vesey Nature Reserve (2013) and Eve’s Pond. With the purchase last January of a ten-acre property currently accessed by Alton Hill Road and High Point Lane and bounded on the eastern boundary by Alton Lodge in Southampton, the necklace now has a fourth link and once again Buy Back Bermuda has saved a significant piece of countryside from construction. Jennifer Gray, chair of Buy Back Bermuda, former executive director of the Bermuda National Trust and president of the Bermuda Audubon Society, explains: “A major gift from a private anonymous donor made the purchase possible, as well as funds from our acquisition account, including $300,000 donated by PartnerRe in 2008.”

This unspoiled property will make it possible for members of the public to experience what for many in Bermuda is a luxury: a fragrant walk in fennel-filled countryside away from the roar of traffic, with only ocean and birdsong within hearing distance. Like the other reserves, it contains woodland, wilderness and ocean views. The steep coastline facing the Southwest Breaker is significant, not only for its stunning view but also because it has the second-largest nesting population of longtails on mainland Bermuda. Eventually, a lookout and loop trail will allow close-up views of the birds swooping in and out of the cliff. Other birds feel at home, too. Barn owls have been seen here and it’s thought they might also be nesting. A bald eagle, an accidental tourist, has been resident for some months. Trees include young cedars, as well as the ever-present casuarina.

However, unlike the other reserves, the acreage here also encompasses arable fields. Indeed, the property has had an agricultural past since it was owned by poultry farmer Thomas James. Retired veterinarian Dr Tom James explains his father bought it in 1959 so that he could better represent smaller farmers. During the early 1960s, strikes in the US and dock strikes in Bermuda led to severe animal feed shortages on the island. For that reason, James released some of his pullets on the property so they could forage for themselves. To keep them from wandering away, he also fed them boiled potatoes with the result most survived. He also experimented with feed by growing tall rapid leaving grass, which once cut and stored became silage for his cows on his dairy farm in Warwick. The arable land is currently farmed by Tom Wadson, who as a boy spent much time working with James on the farm. “I have fond memories of all of that,” he recalls. Today, he cultivates fields and keeps sheep. As Jennifer Gray says, “Farming fits really well with our mission so the farming lease will be maintained.” The estate has been known as Alton Hill but will have a change of name, possibly to be decided by a competition.

What changes will Buy Back eventually put into place? “A major job will be clearing the casuarinas, especially on the coast,” says Gray “We’ll need to hire machinery to chip them. We’ll also create a new loop trail close to the one cut some time ago by the Bermuda Hunt Club, a farm path, some fencing, and a small parking lot.” Other plans could include a garden or educational farm so that groups of school children could be brought here to learn about modern ways of organic farming and composting. As at Eve’s Pond, there will be plantings of Bermuda’s natives and endemics.

Hopefully, the reserve will be open to the public on Earth Day 2024. Fundraising for turning it into a publicly accessible nature reserve and for maintaining all four of the Buy Back Bermuda properties will begin in the fall.

The Alton mystery rose came into being, so to speak, in 2009. As president of the Bermuda Rose Society, Clare Russell, explains, this rose resulted from a chance seedling found under a dead polyanthus fairy rose bush in John and Rosemary Talbot’s garden at Alton Lodge in Southampton. The Talbots looked after the seedling for some months. Then Clare Russell’s mother, Ronica Watlington, an active member of the Bermuda Rose Society at the time, took a cutting of this new seedling from which she propagated many more plants which are now all over the island. Like many Bermudian mystery roses, it is named after the place of its discovery. “We certainly don’t know what the pollen parent is,” explains Russell, “although the closest plant to it was the Emmie Gray. When you see a fully mature Alton rose, it looks very much in growth habit Gray, yet it’s spreading nature and its inflorescence nature is very much like the fairy.” It can be easily propagated in soil, but Russell managed to propagate slips in water by accident. She had been pruning in anticipation of a hurricane two years ago and put two or three buckets of clippings in water so she could propagate them in soil later. “I thought I’d just shove them in water and let the best man win and virtually all of them rooted.”

The Alton rose flowers all year round, producing tiny little clusters of pink, deep pink to pale pink, single blossoms, depending on the climate and the time of year. According to Roses in Bermuda Revisited, it is “useful in petite floral designs as its blooms and hips are small, bright and perky and last well.”

To support the Buy Back Bermuda campaign, visit www.buybackbermuda.bm