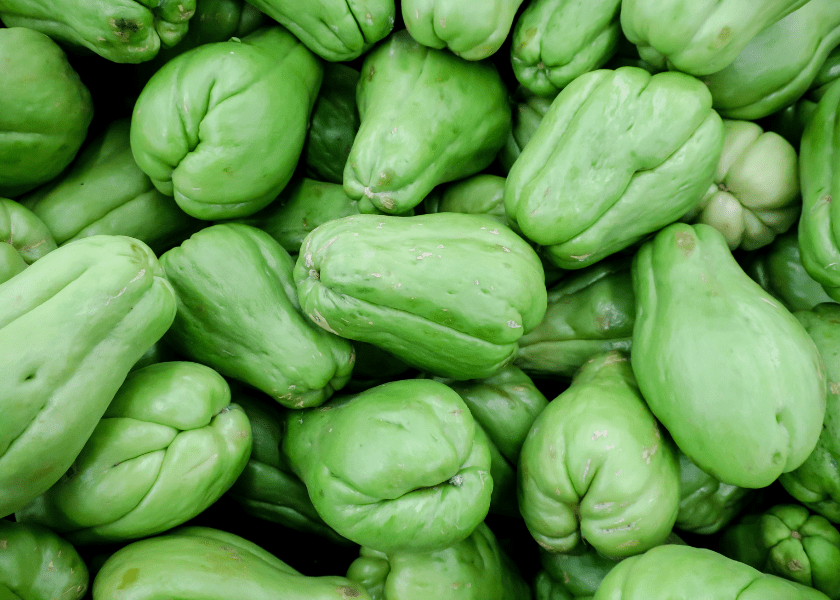 This article was taken from our archives. It first appeared in the November 1938 issue of The Bermudian. It appears here exactly as it did originally.

Bermuda, alive to the necessity of preserving its great natural beauty, is losing out on the practical side. Christophine, a vegetable grown so long in Bermuda as to seem indigenous, valuable for almost year-round food and for local colour, is in danger of extermination. A lecturer on genetics in Harvard college, conversant with botany, was a visitor in Bermuda last winter. He was much taken with “christophine” when it appeared on his local hotel menu. Although he had been in most of the West Indies and knew their plant life, christophine was new to him.

Bermudians have no idea how fast this vine of easy culture, rapid growth, abundant bearing, is disappearing. According to old inhabitants, almost every home had its christophine vine. Very much not so.

“We had one, but the drought killed it,” was invariably the response to inquiries for growing christophines. At last, through the Farmers’ Market, a bearing vine was located half-an-hour’s train-ride from Hamilton. The woman of the house knew her christophine.

The vine, about a hundred feet long, spread luxuriantly over the low chicken-pen fence. A christophine weighs from one to one-and-a-half pounds apiece, the grower said, and sells for twelve cents a pound. Not so bad when the yield is from one hundred to two hundred a year. A christophine is shamed like a pear, and its exterior is uneven and rough. There are two kinds, white and pale green, alike in every way save colour.

Propagation and care are simple. The christophine may be left on the vine, or it may be placed in water-half-imersed-tapering end down, until it sprouts or “springs.” The seed which resembles a large peeled almond literally springs to view at the large end, and leaves soon appear. The christophine is planted whole in the ground, the top exposed, with plenty of fertiliser. The pulp shrivels and sloughs away. When drought starts, the earth should be covered with layers of sand; the vine may die down, but fall rains should revive it. Contrary to popular belief, excessive heat is only the indirect cause of the roots dying. Rats have a decided taste for the dried roots and gnaw them to the last morsel. With a little effort, however, every housewife can have at hand a delicate , healthful vegetable, with flavour not unlike that of the best summer squash.

To cook: Peel, cut in cubes and steam. As the christophine is watery, steaming is preferable to boiling. When soft, mash fine, season, using plenty of butter. It makes an agreeable addition to soups.

A Portuguese woman remembers that thirty years ago her father peddled vegetables and foreigners clamoured for christophines. The natives did not begin to eat them until the last ten years, and now the demand is greater than the supply.