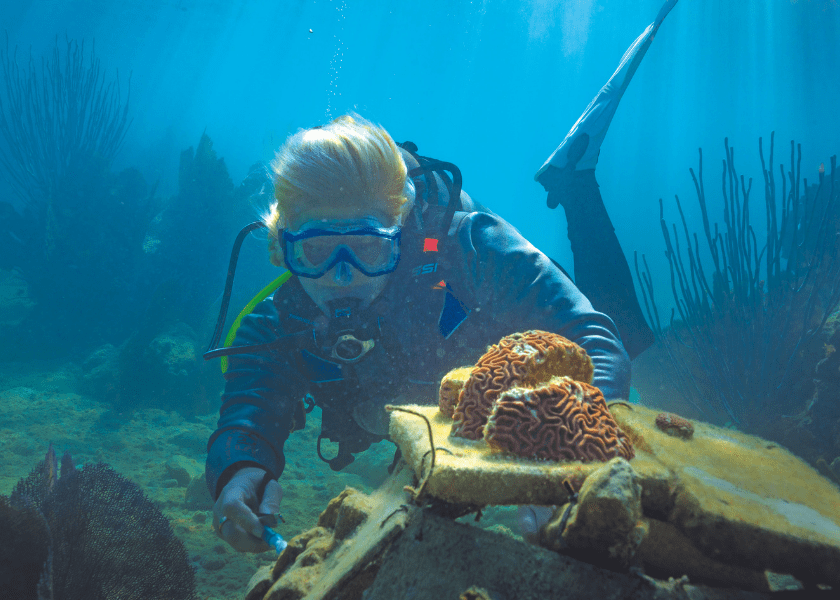 In the third of a four-part series exploring the issues, initiatives and events which impact Bermuda’s ocean, we speak to Dr Samia Sarkis, Director of Research and Development at the Living Reefs Foundation (LRF), about the ground-breaking work they are doing to repair, regrow and research our precious coral reef.

While climate change is having a devastating impact on many coral reefs around the world, Bermuda’s reefs, to date, “remain relatively pristine,” says Dr Sarkis. This is because of their high latitude. But we need to keep it that way and they are still considered high-risk because of their proximity to our densely populated island and are frequently damaged by hurricanes, pollution and boats.

“Our most direct physical impact on the reef is associated with coastal development and maritime traffic,” continues the marine biologist. “Over the past 50 years Bermuda has seen an increase in maritime traffic related to recreational boating, tourism and import of goods. With this comes an increase in grounding events.”

A healthy coral reef means a healthy array of sea creatures, but our reefs are not just important from an ecological perspective. They are also vital for Bermuda’s well-being. “Coral reefs provide goods and services equivalent to up to $1 billion per year through coastal protection, habitat for fish we consume, a prime tourism asset—formation of all our pink beaches—and, of course, an education resource as a biodiverse ecosystem,” she explains. It is for this reason that the LRF was established in 2014 and their Coral Garden Initiative followed in 2016.

The LRF has a hatchery located in a government facility on Coney Island, and this is used to research the culture of young corals. The coral gardens are operated from the Tucker’s Point water sports centre and are anchored to the Castle Harbour seafloor. Corals are grown or restored at the hatchery using two approaches. Firstly, microfragmentation, in this case cutting off the living tissue from the damaged coral and discarding the dead rock. Small fragments of a colony will grow faster than one large damaged colony. And secondly, producing corals based on their natural sexual reproduction cycle. “Eggs or larvae are released by parent colonies,” explains Dr Sarkis. “We collect them and expose them to various light and feeding regimes, measuring their growth routinely. Once large enough, we transfer them to the coral gardens for further growth.”

Coral spawning occurs around June, July and August and is related to the moon cycle. “We’re working with mustard hill coral. This is an easy coral to work with because they release ready-formed larvae. They don’t release eggs and sperm which actually makes us skip a whole complicated step in their sexual reproduction,” she continues. “We collect them ten days before the new moon.” The larvae are collected using a sieve and are retained on the mesh. Corals release larvae at night so the collecting is done in the morning and the larvae are provided with a substrate—ceramic tile or natural rock—to settle on.

Research is being done into how many larvae actually settle on the substrates, where they settle and how the flow affects where they settle. “If you look at this natural rock, there’s a whole bunch of larvae that settled in the niche. If you take that and put it out in the field, they will be protected from fish grazing,” she explains. “We’re assessing the settlement type, type of lighting, how much food to give them.”

For the microfragmention, the LRF has a “rescue coral permit” allowing them to collect corals that have been broken or damaged from storms or groundings. “We clean them up by cutting the dead coral, removing boring organisms which will deter their growth, and microfragment them to stimulate growth. Similarly, they start in the hatchery and are thereafter transferred to the coral gardens. In this way we preserve the genetic material of damaged corals.” Dr Sarkis puts coral fragments from the same coral colony together, in a pile, because they will recognise each other and will therefore grow down and merge together faster than if the corals were from different colonies. “It’s called allorecognition,” she explains. “They actually recognise their own colony.”

While microfragmentation is a good tool for regenerating rescue corals, that alone limits genetic diversity in the long term. Growing corals from larvae or eggs maintains genetic biodiversity and improves their long-term resilience. The latter approach is also important for the slower growing boulder coral found in Bermuda and this is where the LRF is ahead of the curve in terms of its research. “Many of the restoration techniques worldwide are focused on the fast-growing branching corals—species we don’t have in Bermuda,” says Dr Sarkis. “Our reefs are composed in great part by boulder—non-branching corals such as the brain coral—which are known for their slow growth, one centimetre per year. We therefore have to adapt and develop techniques suited to our corals and our environment.”

The LRF is also pioneering coral research with their Coral Garden Initiative, which is unique to Bermuda. The coral gardens are an “ocean-based nursery,” she explains. “It is a housing for young corals to grow in their natural surroundings. Once large enough, they are transferred and secured to the reef itself.” At the time of writing, there are six coral gardens in Castle Harbour. The gardens are made using a reinforced metal, or rebar, pyramid-shaped frame. Young corals are attached to the frame and their growth is monitored over time. The aim is for them to grow into a fully fledged coral reef that can sustain marine life. Dr Sarkis hopes they will not always have to use metal frames. “We are investigating other forms of coral gardens which could ultimately become part of the reef, mimicking the composition and the appearance of the natural reef base.”

Adopt a Coral Garden was launched to help with the financial side of coral gardening as a way for individuals or businesses to get involved, and separately, LRF received a grant from the Bermuda Tourism Authority to expand the “coral garden visitation experience.” They also receive support from QBE Equator Re which directly helps their coral garden research and implementation. Internationally, LRF works with the University of Virginia and the University of Oxford, and locally they collaborate with BIOS and Rosewood Tucker’s Point, as well as offering workshops and tours through Waterstart and the Bermuda Zoological Society.

Money talks, and in addition to tourism and environmental benefits, coral reefs provide Bermuda with valuable coastal protection. In a 2010 research paper “Total Economic Value of Bermuda’s Coral Reefs” by S. Sarkis et al, the average coastal protection value of Bermuda’s coral reefs was determined to be $265.9 million. Dr Sarkis is therefore keen to get more insurance and reinsurance companies involved with LRF “to better define the monetary value of the role of reefs in the protection of our coastlines, their mitigation in the extent of flood zones and damage to properties and infrastructure during storm and hurricane events.” Elsewhere, this is already happening. In 2018, Swiss Re, The Nature Conservancy and regional governments in Mexico developed a coral reef insurance product to protect the Mesoamerican coral reef off the coast of the Yucatan Peninsula. The product covers reef restoration work following a hurricane.

While hurricanes are out of our control, reef destruction from pollution and boat damage is not. “There are a number of things we can do,” says Dr Sarkis. “Careful boating, no speeding around patch reefs, no anchoring on corals, no emptying of bilges close to reefs, precautionary use of reef-safe sunscreen, reduction in single-use plastic, no standing on or touching corals while snorkelling.” She also calls for improved legislation with respect to the “reporting and actions necessary to minimise boat grounding impacts in Bermuda.” When a boat propellor cuts through a reef, “everybody thinks about the boat damage. Nobody thinks about the coral damage. The boat is fixed in one month; the corals take decades.”

For more information about the Living Reef Foundation, visit livingreefs.org.