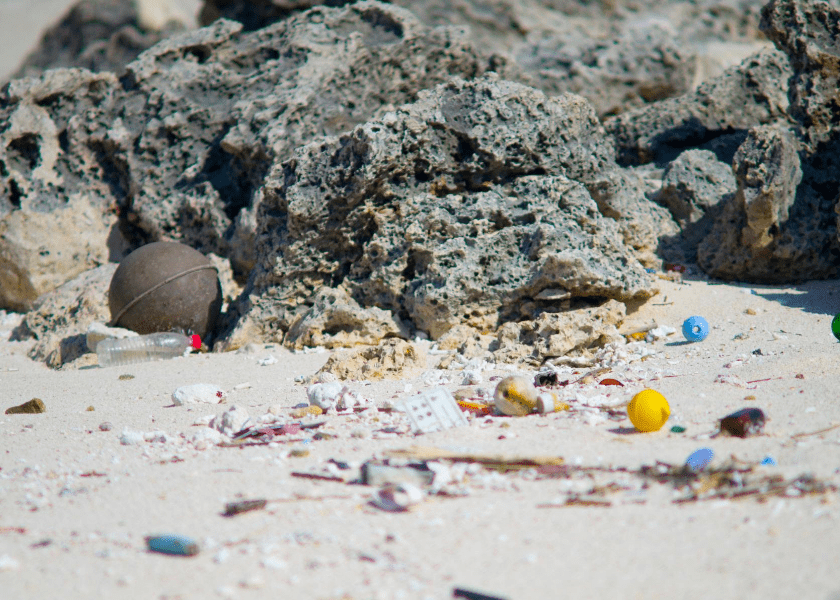 Our lifestyles generally, the pollution we generate and the amount of waste we create through packaging or discarding items we no longer want, especially when they are not discarded properly, are damaging our island’s ecology and contributing to climate change. What must we do to stop this getting worse?

Bermuda is beautiful, but take a closer look and you will spot snack packets, plastic bags, discarded bottles or even the detritus of a whole meal that someone has been too lazy to dispose of correctly. From afar our sandy beaches make perfect Instagram photographs, but as you walk along the shore, you will notice plastic pieces everywhere, often sitting alongside trash that hasn’t washed in with the tides.This rubbish isn’t just hurting the way our island looks. It is damaging Bermuda’s natural habitat. Where does this problem stem from, what damage does it cause, and what can we, as individuals, do to improve the situation?

Onshore Trash
“Our current lifestyle is definitely impacting the environment,” says Anne Hyde, executive director of Keep Bermuda Beautiful (KBB). What is causing the most damage, however, is the “sheer volume of waste,” she says. “Littering is a daily occurrence. Illegal dumping is happening weekly. At Tynes Bay you would cry to see the perfectly good items that still have a useful life…We need to reduce the amount of trash we create. That should be one of our top goals.”

The problem with waste is not just the litter we see, but also the carbon emissions created during the manufacturing and transportation process of these goods and their packaging. “All goods are imported by ocean freight and bringing that across to Bermuda, in our isolated location, is costly and transportation is one of the biggest carbon emitters,” continues Hyde. “If we get the full life of those goods, we would be impacting the environment less. It’s a combination package of throwing out too much, not sorting our waste properly and some of our waste management could stand to be improved.”

On a positive note, Hyde adds that for the size of our population, Bermuda does have “an extremely sophisticated waste management system with the energy generation at Tynes Bay.” The Tynes Bay Waste Treatment Facility has two streams, each of which is capable of incinerating six tonnes per hour. Each stream has the capacity to produce in excess of 2.5MW of electricity.

One of the first adjustments we can make is to recycle more. “Less than a third of residential households participate in the government’s TAG recycling programme,” she says.

Hyde would like to see a campaign to encourage more recycling. “You think you’re one person and one action won’t make a difference, but what if that was multiplied by 60,000? Everybody’s actions count. Start by noticing how much plastic packaging you can avoid just by changing a few simple habits.”

Offshore Trash
“Ocean debris is a huge problem worldwide,” says Kyla Smith, science education officer at BIOS and a member of the Bermuda Marine Debris Taskforce. “Most of it is tonnes of the microplastic, which is some of the worst debris because it mimics some of the food sources that these organisms wouldn’t know to differentiate.”

The Marine Debris Taskforce is a collaboration of environmental and research organisations which studies marine plastic pollution and develops local solutions to this ongoing problem. Members collect information for research, coordinate trash clean-ups and promote awareness about the impact of ocean debris.

Smith explains that nearly every living thing in the ocean is impacted by this debris, from large marine mammals such as whales and turtles, to plankton and even sea birds. She would like to see “more banning of single-use plastics—bags, water bottles, Styrofoam take-out containers, plastic straws.” She admits this could be hard, but advises to “start small. When you leave your house, you have your cell phone, wallet, car keys. If we get into the motion of taking reusable water bottles and Tupperware too, that would help promote less consumption of single-use plastics.” She also wants people to “make sure everything gets into the trash bins. Don’t put them out too early so the birds get to them.”

The change Smith believes would have the biggest impact is “to eat as locally sourced food as possible. By buying produce that is locally farmed you’re preventing the food miles—the carbon footprint of the transportation of these goods and also the packaging on top of that.” Smith also echoes Hyde, by adding “buy what you need and try not to be one of the big consumers.

Pollution
Other by-products of our lifestyle such as used motor oil, petrol fumes and personal care products are also having a negative, sometimes devastating, impact on Bermuda’s waters, especially ponds.

Dr Jamie Bacon, education officer and research associate at the Bermuda Zoological Society, spent over 12 years studying which contaminants were causing deformities in Bermuda’s toads. She noticed that many had deformed or missing limbs and eyes. She and toxicologist Dr Fort then discovered endocrine disruption was affecting the toads’ external sex characteristics. This led to the discovery of similar hormone abnormalities in killifish and red-eared slider terrapins.

“Hydrocarbons, particularly PAHs (polycyclic aromatic hydrocarbons found in used motor oil and vehicle emissions), were responsible for the limb deformities and endocrine disruption, while metals were causing the facial defects in amphibians,” Bacon explains. These vehicle hydrocarbons “run off” from the road into the ponds. Bacon and Fort subsequently attempted remediation at Cloverdale and Evans ponds, the latter being a home to protected killifish. This involved “using bacteria that live in sediment. They consume hydrocarbons, but were starved of oxygen. We put large air stones on the sediment and fed them air from a compressor through weighted air lines. The air would slowly diffuse through the sediment enabling the bacteria to reproduce and eat the hydrocarbons.” The good news is this process worked. The bad news, she says, is “it’s only temporary because we’re still using cars and vehicles on the road and that road run-off is full of contaminants that don’t stay in the soakaways.”

Dr Bacon is currently remediating a pond at the Mid Ocean Club golf course, home to another protected species—the diamondback terrapin, whose reproduction has been hindered because of the high levels of hydrocarbons and metals they consume. She is hopeful this will provide a more permanent solution as it is further from a busy road.

Other contaminants found in ponds include over 20 pharmaceutical and personal care products and over 20 different new generation pesticides. While these don’t have the same damaging effects as hydrocarbons, they are still potentially damaging and Bacon warns: “What is put on the fields, doesn’t stay on the fields,” and “unused medications need to be taken to the incinerator to be burned, not flushed down the toilet.” If we, as individuals, want to do our part to help our pond life, she says, we need to switch to electric vehicles and use environmentally friendly products.

What About Pollution in Our Oceans?
Destinations including Hawaii, Palau and the US Virgin Islands have banned sunscreens containing the chemicals oxybenzone and octinoxate, which they describe as “reef-damaging.” However, Dr Eric Hochberg, senior scientist at BIOS, explains that “there is no evidence that long-term low-level exposure to oxybenzone has an effect on the photo physiology, which is the photosynthesis and the metabolism, of Bermuda corals.” He emphasises, however, that there is still more to study, as they have not yet investigated the corals’ larvae. “When corals reproduce, their larvae often swim to the surface. That is where these oils will be floating, but we did not study other potential impacts.”

In general, Hochberg says, that “Bermuda’s reefs are phenomenal,” even the ones close to the Seabright sewage outfall. One of the reasons for this is that “the solution to pollution is dilution.” The flushing nature of the ocean helps to lessen the impact of pollutants on the reefs. He does add that “the better solution is to not pollute in the first place,” explaining that other pollutants from boats such as oil slicks are damaging to marine life, and the anti-fouling paint used on the bottom, if it chips off, is toxic. The impact of chemicals in personal health-care products such as medicines, deodorants, hair products or makeup has also yet to be fully studied.

Changes to Try
Reusable shopping bags and water bottles have become the norm for many of us, but what more can we do to reduce the amount of trash we discard or pollution we create?

• Choose glass bottles or aluminum containers over plastic ones.
• Buy more locally produced food instead of imported.
• Carpool, use public transport, or consider an electric vehicle
• Wear more sun protective clothing, therefore less sunscreen.
• Having a party? Invest in cloth bunting instead of balloons.
• Keep reusable cups and straws in your car for unplanned coffees or smoothies.
• Upcycle or donate your unwanted clothing, toys or furniture.