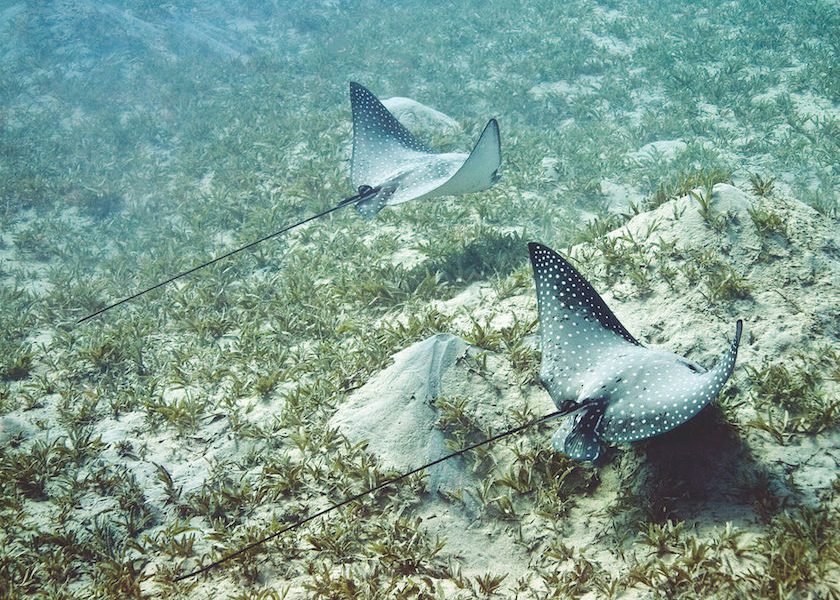 Seagrass beds are an ecosystem unique from coral reefs, but deserving of as much acclaim. They occupy inshore shallow waters, and act to trap marine sediments suspended in the water column, making our waters crystal clear. Their roots also stabilise the sandy bottom and minimize the effects of erosion.

Sea grass beds can create 10 litres of oxygen per square metre per day. One hectare of sea grass is estimated to be worth about $19,000 per year because of the benefits it offers in producing oxygen and supporting commercial fishing.

Where To Go
Seagrass beds occur in patches all around Bermuda’s coast. Some prominent seagrass meadows include Daniel’s Head and Somerset Long Bay, where turtles can be observed very close up, and Flatt’s Inlet where sea grass can be seen from the water’s edge. Hog Bay beach also has sea grass meadows at wading depth.

Ecology
Sea grasses are true plants, which produce seeds and flowers. Their leaves have a thin cuticle layer, which allows for the free absorption of nutrients from the water. The nutrients locked in to sea grass make them a productive ecosystem, hosting small invertebrates, fish, sharks, turtles, eels, and octopuses and squid.

Sea grasses are connected underwater by a rhizome root system. The rhizome grows horizontally, while individual plants grow up and flow in the current. The rhizome and roots anchor the plants securely, which has the added benefit of stabilizing the sea bottom sediments and preventing erosion.

Which Sea Grasses Does Bermuda Have?
We have five different sea grass species, with turtle grass (Thalassia testudinum) being the most recognizable. This is the grass that green turtles most commonly feed on, though they can eat all types of sea grass. Turtle grass is one of the largest sea grass species, and has ribbon-shaped leaves.

Manatee grass (syringodium filiforme) is cylindrical in shape, and is the most common sea grass found in Bermuda. Shoal grass (Halodule sp) looks like thinner turtle grass, and can grow alongside other sea grasses. Finally, paddle grass (Halophila decipiens) is the least common sea grass, but is a delightful oar shape.

What Can You See There?
Seagrass beds are very productive and thriving ecosystems, almost as lively as a coral reef. Some characteristic visitors include green sea turtles, which are very common around seagrass beds and can be seen feeding. Spotted eagle rays also forage the sandy area near sea grass beds by burrowing into the sediment, searching for molluscs like calico clams.

Goldspotted eels can be seen wriggling like a snake through the sea grass tufts. They are seen most commonly at night, foraging for crabs and starfish, but they can be glimpsed sometimes during the day.

Reef squid and common octopi find a rich feeding ground on the seagrass beds, feasting on crabs and other small invertebrates.