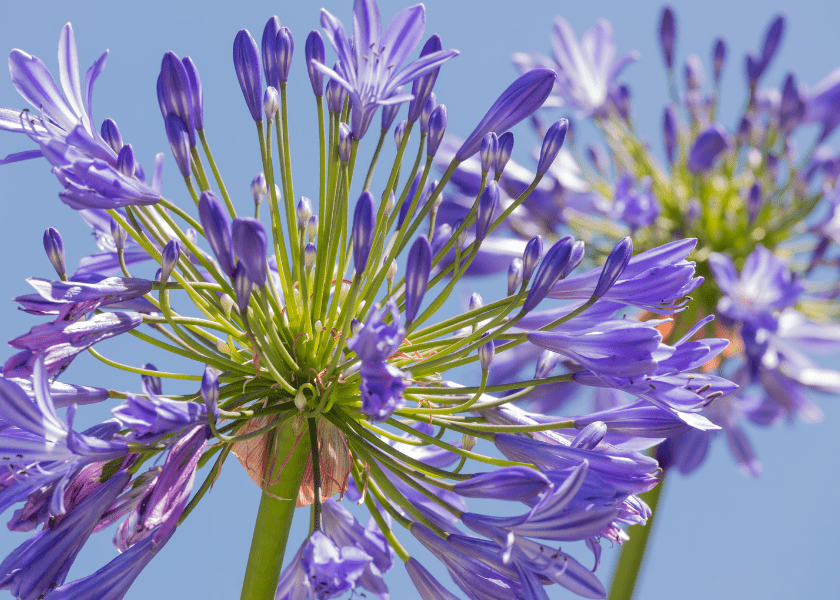 This article was taken from our archives. It first appeared in the August 1955 issue of The Bermudian. It appears here exactly as it did originally.

Toward the end of May, a lovely flowered member of the lily family commences to open its very pleasing, violet blue flowers. In the horticultural world this plant is known as Agapanthus umbellatus. Popular names such as the Blue Lily and Lily of the Nile have been at­tached to the plant. The latter name however may be a little misleading because all the literature to which the writer has referred does not indicate that this Agapanthus is actu­ally found growing in the wild state in the vicinity of the River Nile. Most botanical and horticultural works give the native habitat as South Africa. As the designation South Africa, used by the botanist, may intend to cover a somewhat larger geographical section of the African continent than the actual country of South Africa, it is possible that the subject of these notes is found growing somewhere in the region of the source of the famous African river. Horticul­tural literature does concede that the plant grows freely on the edges of lakes and rivers.

Although this plant is known throughout horticultural circles as Agapanthus umbellatus, the botanists have decided that the correct name is A. africanus, because the name A. umbellatus is invalid. The plants to which it was applied in 1788 already had a valid specific name, Africanus, ap­plied in 1753. To delve a little further into the history and nomenclature of this Blue Lily, it appears that hybridists have been busy and there are a number of hybrids and varieties which have been raised by using at least three species, namely, A. africanus, A. orientalis and A. campanulatus. It is more than likely then that the plant known to the writer as A. umbellatus is not a true species but of hybrid origin.Thus, the horticulturist is quite justified in using the old familiar name of A. umbellatus. It is of further interest to look at the meaning of the word agapanthus. Agapas, which means love and anthos a flower, lead the writer to suggest a new popular name for this Blue Lily – “The Love Flower.”

A handsome member of the family Liliaceae, the subject of these notes is perennial in habit, with a short creeping rootstock and thick, fleshy roots. The leaves are typically linear in shape and arching. The large flowers, produced in a many flowered umbel on long stalks are most conspicuous. It is found in many gardens throughout Bermuda, but it thrives best in reasonably deep red soil. The plants produce larger and better flowers when there is adequate soil moisture at the roots. In dry seasons the flowers tend to become smaller and fewer in number.

Specimens of the Agapanthus should always be included in the border of bulbous plants, since they will go on flowering year after year without replanting. Occasionally it is advisable to lift the plants, dig the bed thoroughly, and at the same time incorporate a good application of well-rotted manure, before replanting. If planted in large pots or tubs, they will make useful plants for decorating the porch or veranda. In addition to the plant’s qualities as a good garden plant, it is also very useful as a cut flower for interior decorating schemes.

Propagation is usually done by division of the rootstock; plants may also be raised from seed, but this method is usually adopted only to obtain new varieties, as it is a much slower method than by division.

The writer has not been able to trace the date of introduction of this plant to Bermuda. It has been known here for many years and could have been brought into the Colony from various sources. The Agapanthus is well known in many countries. Being a South African plant, it cannot stand frost, but in those places having a cold winter the plant is grown under glass during the winter months.