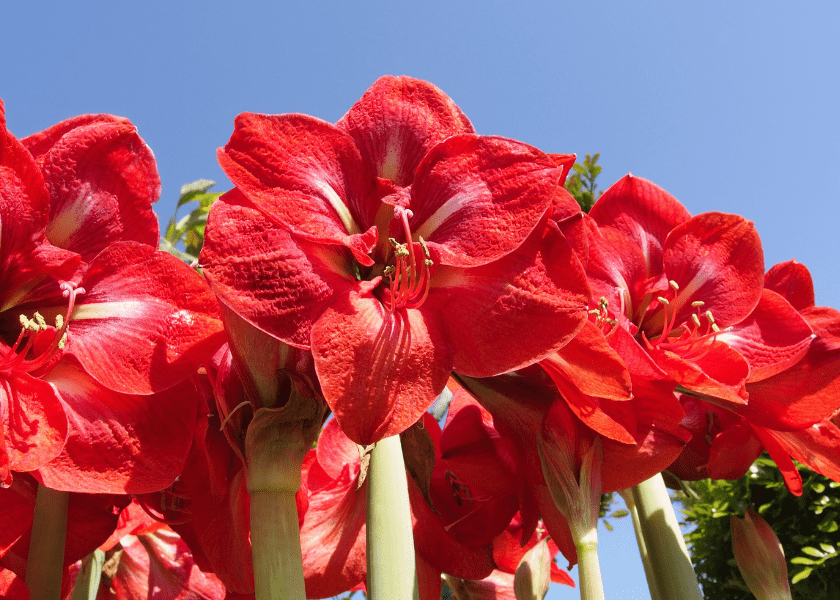 The name Amaryllis is a popular term given to several genera such as Hippeastrum, Zephyranthes, Sprekelia and Amaryllis, all of which are well-known ornamental garden plants. In Bermuda, the plants referred to as Amaryllis are mostly hybrids of the Hippeastrum. There are many varieties with beautiful large flowers, either red, white or striped red and white. The flowers are usually born, two to four together on a stout stem. In addition to the hybrids, there are three species cultivated here namely, Hippeastrum equestris, the “Barbados Lily” with orange red flowers, Hippeastrum johnsoni, with dull crimson flowers, and Sprekelia formossissima with bright red flowers. To complete the series, mention should be made of the Amaryllis belladonna, the “Belladonna Lily” of South African origin which bears flowers of a delicate pink shade. The hybrids are cultivated commercially by some of the florists for the production of bulbs for export for the USA and Canada.

Little appears to have been written of the Amaryllis in Bermuda. The writer has not been able to trace the introduction of the plant to these Islands. It is interesting to note that in the case of some plants, very definite records have been made of the date of introduction, but in the case of the Amaryllis, known here for many years, no records appear to have been made, or if they have, they are so obscure that the writers of Bermuda history and plant life, have completely overlooked them. The species referred to earlier, are recorded in “Flora of Bermuda” by Britton, as growing in Bermuda, but no mention is made of the hybrids.

Flowering takes place in the spring time, March, April and May. In most cases the flower stalks appear before the foliage. After flowering the leaves develop and the plant continues growing throughout the summer months. Occasionally, flowers are produced during the autumn. In the late autumn the leaves die gradually, so that by the time flowering commences, the plant is leafless.

The Amaryllis is a typical bulbous plant with very large bulbs. It is usual to find the neck of the bulb above the ground. In the case of many bulbous plants the bulb is completely hidden, but not so with the Amaryllis. The bulb divides and forms offsets or little bulbs. This is the natural way of propagation and is the only method which may be used to perpetuate the hybrids. The process may be hastened by slicing the large bulbs longitudinally into eight pieces. Each piece bust possess a portion of the disc at the base of the bulb. If these sections are placed in a compost of sand, peat and soil in equal parts, bulbs will develop in from three to six months. By this method the stock for a special variety may be increased more rapidly than would be the case if the plant were left to its own devices. Amaryllis may also be propagated by seed. It is from the production of seed that new varieties are raised. The flowers are readily cross-pollinated and the resulting seed germinates freely, producing strong plants. However, the colour and style of the flower will not necessarily be like its parents. Sometimes superior blooms are obtained, but in other cases, less desirable progeny is the result. Hence the reason for adopting vegetative methods of propagation when it is desired to ensure the variety remaining true to type.

Any of the species and hybrids will thrive in most gardens in Bermuda where a reasonable depth of soil is available. It is not necessary to lift the bulbs every year, but transplanting every third or fourth year is advisable.