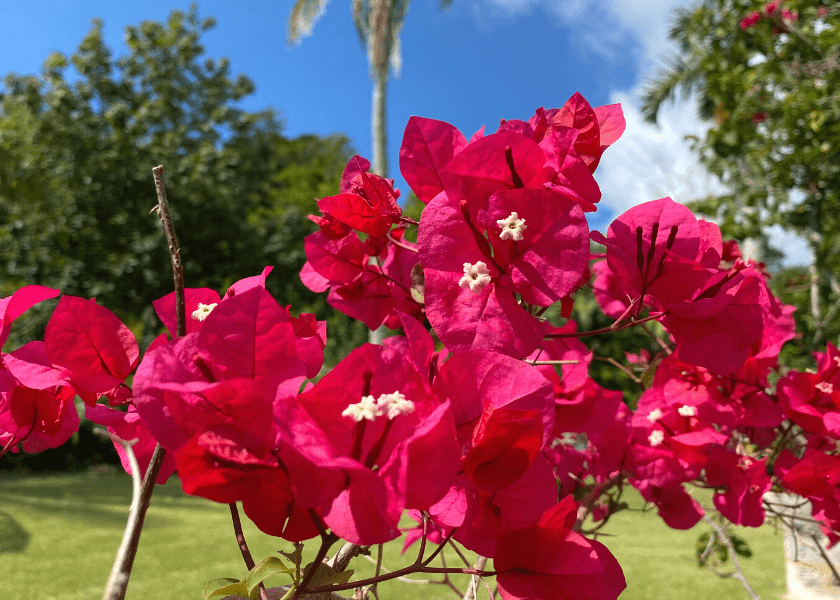 This article was taken from our archives. It first appeared in the September 1953 issue of The Bermudian. It appears here exactly as it did originally.

The Bougainvillea is regarded as the finest of the flowering climbing plants of the warm regions of the world. Many writers have referred to the magnificent colours and the amazing growth provided by this plant. These descriptions, although they may appear exaggerated to those who have never seen the Bougainvillea when grown to perfection, do not in any way over-emphasize the wonderful flowering ability of the plant. For all who see the Bougainvillea at its best have nothing but praise and find it difficult to adequately describe its great beauty and vivid colouring. The colour range from deep purple to light purple, pink crimson, orange-red, orange-yellow, and white. Frequently in some varieties, various shades will be seen in individual flowers, depending on the shadows cast by other flowers and foliage.

Essentially a climbing plant, the Bougainvillea grows with amazing rapidity, quickly covering it allotted space. It is commonly found covering large cedar trees so completely that the only visible part of the tree is the trunk. Each short terminates in a festoon of coloured bracts, which provides the beautiful coloration. The true flowers are small and inconspicuous but they are surrounded by these highly coloured bracts and it is difficult for the average person to distinguish the flowers from the bracts. Hence, the coloured bracts are always referred to as the flower of the Bougainvillea.

This plant may be used in a variety of ways. Although it has been planted near large trees on which to climb, it is not a recommended practice as a covering for dead cedar trees, since the roots of these dead trees decay quite rapidly and the tree frequently collapses during high winds under the weight of the Bougainvillea. As a covering for walls, fences and pergolas, the Bougainvillea is one of the most successful climbing plants. It may also be trained into standards or even hedges, with most spectacular results. When it is used to cover fences and walls, and when the plant has filled the allotted space, the long shoots should be pruned back close to the support. This will keep the plant in bounds and also encourage it to flower on short spurs. The result is just as pleasing in fact more so than when the plant is allowed to roam at will. Although it is such a luxuriant grower, the Bougainvillea should be planted in the more sheltered positions. In very exposed places the plant becomes defoliated and is rarely able to flower successfully.

The Bougainvillea was named in honour of Louis Antoine de Bougainville, a French navigator. It was first mentioned by Jussieu in 1789. There are seven or eight species in the genus, all of which are natives of Brazil. The actual introduction of the plant to Bermuda is reasonably certain. It is thought by some people that the first plants were sent to Governor Lefroy from Gibraltar in 1874 by Col. Faffan, who afterwards became Governor Laffan. There is, however, an authentic record of a letter written by Brig. General Henry Dennison in 1930 stating that he brought the Bougainvillea from Gibraltar in 1874 and planted it at Government House. Since that time many plants have been brought to Bermuda by people returning from the West Indies. In fact, it is probably correct to say that more Bougainvillea plants have been imported from the West Indies during the past 50 years than any other plant. There are several named varieties of which the following are well known, Crimson Lake, Mrs. Butt bright rose, Lady Wilson rosey cerise, Orange King, also known as Louis Wachen, Lady Huggins, Lady Watt and Helen McLean.