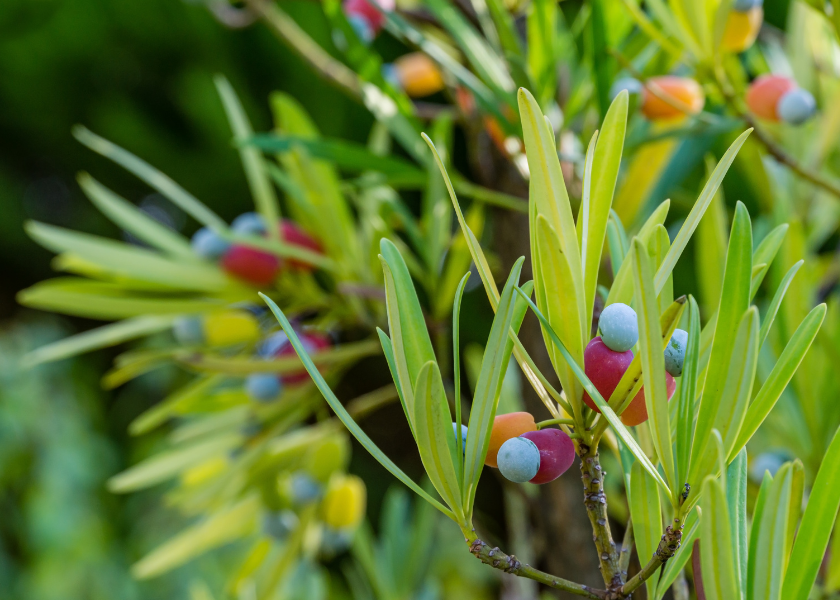 This article was taken from our archives. It first appeared in the April 1954 issue of The Bermudian. It appears here exactly as it did originally.

Although the subject of these notes is not an old established Bermuda plant it is fitting at this time to bring the plant to the foreground. Isolated specimens of Podocarpus macrophyllus were planted in Bermuda 40 years ago, but it was not until 1948, when members of the Department of Agriculture were looking for suitable trees to replace the Bermuda cedar that the qualities of Podocarpus macrophyllus were recognized.

Since the year 1948 many trees of this species have been planted. It was freely used as a suitable tree for planting in exposed positions to commemorate the Coronation of Her Majesty Queen Elizabeth II in June 1953. On the occasion of the Royal Visit to Bermuda in November 1953, Her Majesty the Queen and His Royal Highness the Duke of Edinburgh each planted a tree of this species at Government House. As a result of this, and the fact it is recommended by the Department of Agriculture, there is no doubt that further plantings will be made.

This tree is known in Bermuda by two popular names, “Giant Yew” and “Japanese Yew.” The latter is probably the more descriptive, although many people are inclined to pre­fer the use of the former. It is quite true that the plant is a member of the Yew family and is a native of China and Japan, but the subject cannot claim at maturity to reach a size greater than or even as large as the Common Yew (Taxus baccatus) so freely planted in the English countries, particularly in churchyards, or to attain the great age of 1000 years for which the Common Yew is famous. There­fore a name other than the two mentioned would be pre­ferable. The writer finds that in the Dictionary of Garden­ing published by the Royal Horticultural Society the name “Kusamaki” is given to Podocarpus macrophyllus, but this may not find any greater favour amongst the gardening public than the botanical name. A suggestion that the word “Yew” be prefixed by “Royal” making it the “Royal Yew of Bermuda” might be regarded as appropriate and easily remembered.

Podocarpus macrophyllus is an evergreen tree and appears to withstand a considerable amount of wind. There is a small tree of the species in the park at Crow Lane, which was planted in 1940. This particular tree, although bending away from the prevailing wind, always looks fresh and green. Its rate of growth is about the same as the Bermuda Cedar, ap­proximately twelve to 18 inches per year, depending on the annual rainfall. The young leaves are a pale green often tinged with pink; as the leaves get older the pink tinge dis­appears and the leaves assume a dark green hue. The leaves are narrow, between a quarter and a half inch in width and about four inches long, with a leathery texture. Botanical authorities appear to disagree on the actual height to which this tree grows. One authority mentions a height of 25 feet whereas another states the height to be 50 feet.

In Bermuda the tallest tree known to the writer is between 25 and 30 feet high, and it still is in excellent condi­tion. It is a rather upright growing tree and does not ap­pear to have an aggressive rooting system. The flowers of this tree, like most conifers, are insignificant, but the fruits or seed-bearing bodies are quite attractive. When ripe, these fruits are dark purple, fleshy and covered with a glaucous bloom. Propagation is by means of seeds when available, otherwise by cuttings of short shoots inserted in sandy soil, preferably in a frame or propagating case towards the end of the summer. The seeds may be sown at any time.