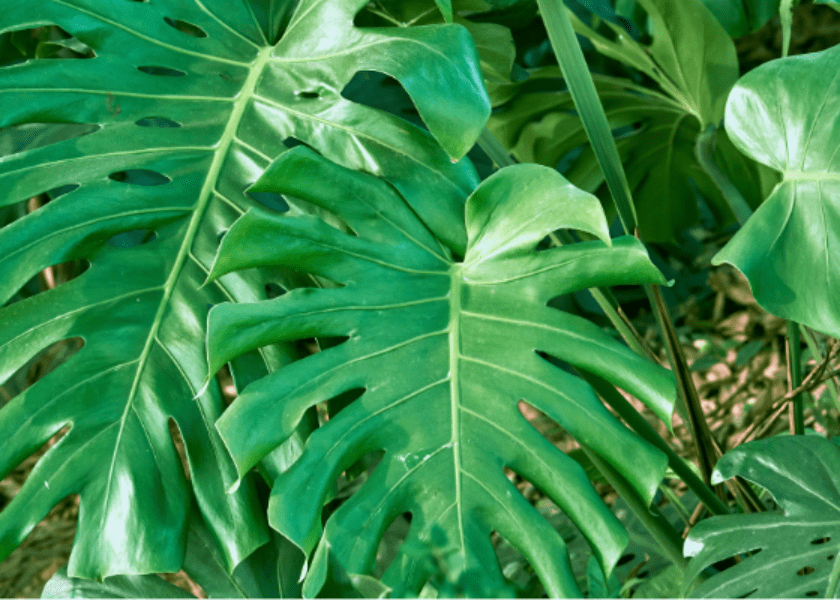 This article was taken from our archives. It first appeared in the February 1952 issue of The Bermudian. It appears here exactly as it did originally.

The botanical name of a plant is never readily accepted by the average person, but for want of a better term, the botanical name is frequently used in this case. Various other names have been given this plant such as Tornelia, Locust and Wild Honey, and Hurricane Plant. It is a matter of choice as to which of the popular names are accepted. Each in some way attempts to describe the plant but like all non-botanical names they do not convey anything of the classification of the plant to the botanist.

Monstera belongs to the Arum or Calla lily family. It is a native of the tropical regions of South America and is notable for its extraordinary perforated leaves, its aerial roots which hang down towards the ground, and its curious edible fruits. The plant is essentially a climber, usually clinging to the trunks of trees. It does not obtain any nourishment from this source, but uses the tree merely as a support. Food and water are obtained by the roots from the soil like any other plant. There are two obvious types of roots. The small ones are seen clinging to the bark of the tree and long aerial roots which, being more conspicuous, naturally attract most attention. These aerial roots may reach from the uppermost parts of the plant almost to ground level. They are able to absorb the atmospheric moisture, of which there is usually an ample supply in Bermuda.

From its large perforated leaves comes the local appellation- Hurricane Plant, the theory being that the wind is able to pass through the leaves without doing any damage to them. Each leaf has a stalk about eighteen inches long.  The blade or flat portion varies from eighteen to thirty inches across and may be likened to a fan in shape. These leaves arise from a rope-like stem varying in thickness from one to three inches in diameter. The flowers are typical of the Calla lily, appearing at intervals throughout the spring and summer months. Although large they are not very conspicuous. They are rather stiff, green on the outside of the single petal or sheath, and yellow inside. Large green fruits quickly follow the flowers. when fully-grown these fruits are six to eight inches long resembling an elongated pine cone. The skin is thick, composed of hexagonal plates making a pleasing artistic design. This fruit takes three or four months to ripen and has the flavour of a mixture of pineapple, banana, and strawberry. Some people consider the fruit too sweet and sickly to be eaten separately, but if used with other fruits in a fruit salad the Monstera makes a delicious dish. It is extremely important to use only well-ripened fruits. When the fruit is fully ripe the hexagonal plates begin to fall off leaving the pale yellow flesh exposed. If any part of the skin is left on the fruit and comes in contact with the mouth, one gets the impression of trying to eat minute particles of glass, a most unpleasant experience. The same unpleasant sensation can be obtained by attempting to chew a piece of the root of the Arum lily. In England it used to be a favourite form of initiating a new garden boy into the artifices of gardening by calling upon him to chew a piece of the Arum lily root while other gardeners looked on.

In addition to its other qualities the Monstera gives a very tropical appearance to its surroundings. It is the type of curious tropical vegetation which the tourist expects to find when visiting a place with a climate such as prevails in Bermuda. With its thick rope-like stems and large leaves giving it an air of distinction it is another example of the great variety of plant life thriving in this tiny but vastly interesting strip of land in the mid-Atlantic.