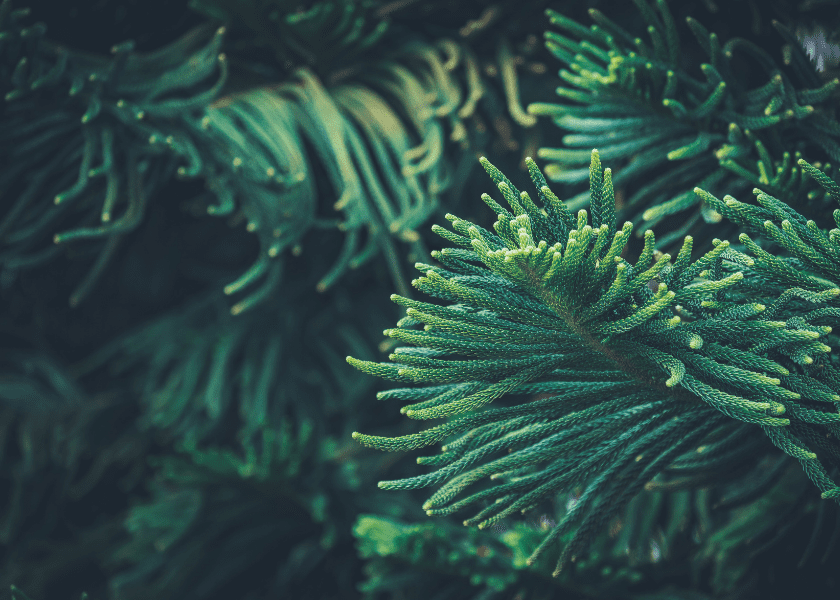 This article was taken from our archives. It was first published in the December 1954 issue of The Bermudian. It appears here exactly as it did originally.

The Norfolk Island Pine is probably the most luxuriant evergreen tree that has been introduced into Bermuda. There are many fine specimens to be seen in all parts of Bermuda. In fact, these very stately trees stand out against the horizon much more conspicuously now than they used to because of the open spaces created by the loss of the native cedar trees.

It is recorded that the subject of these notes was introduced into Bermuda in 1875, coming from Trinidad. Actually this plant is native of Norfolk Island, an island in the Pacific Ocean, north of New Zealand, from whence it has acquired its popular name. Frequently, this tree is erroneously called the “Norwegian Pine”. This is, of course, entirely incorrect and has obviously been brought about by the similarity of the two words Norfolk and Norway. The latter, being the better known, is assumed to be the country of origin of the tree under discussion. The average person who is not acquainted with plant names usually despises the use of the botanical designation but it is from the botanical that the botanist and the horticulturist are able to quickly determine the plant and there is less risk of confusion by adopting the botanical nomenclature than by use of the common or popular term. The Norfolk Island Pine is known botanically as Araucaria excelsa.

The Norfolk Island Pine may be described as a beautiful symmetrical tree growing up to 200 feet in height with horizontal branched and pendulous branchlets. An interesting character of this tree is the way the bark peels off the trunk and branches in thin layers. The leaves are rather soft, awl-shaped, densely arranged, curving inwards a quarter to half an inch, and bright green in colour. The cones or seed-bearing bodies are three to four inches long and about four inches wide. In addition to the species, there are some nine varieties in cultivation. As far as the writer has been able to determine, there is only one variety in Bermuda, namely A. excelsa var. compacta, i.e., in addition to the species.

A tree which grows as tall as the Norfolk Island Pine and presenting such a stately appearance should have a carefully chosen position. It should not be planted close to buildings for two reasons. Firstly, it has a rather aggressive rooting system and secondly, the tops of the trees are liable to be blown out during violent storms. This may cause considerable damage if falling branches come into contact with a building. It is most effectively used when planted as an avenue on large estates. Planted in pairs on either side of a gateway is likewise most pleasing. As a single specimen, however, the writer feels that this tree is rather too stiff and formal for most Bermudian gardens. Another purpose to which this plant may be put is for the decoration of the porch or similar places. In this case, young trees planted in tubs will develop into attractive specimens. When they have grown too large for the receptable they may be planted out in the open. Propagation is by seed which germinates readily. Growth is slower in the initial stages, but becomes more rapid after the first two years. Several of the adult trees in Bermuda produce viable seed regularly. It is from this source that new plants are being raised.