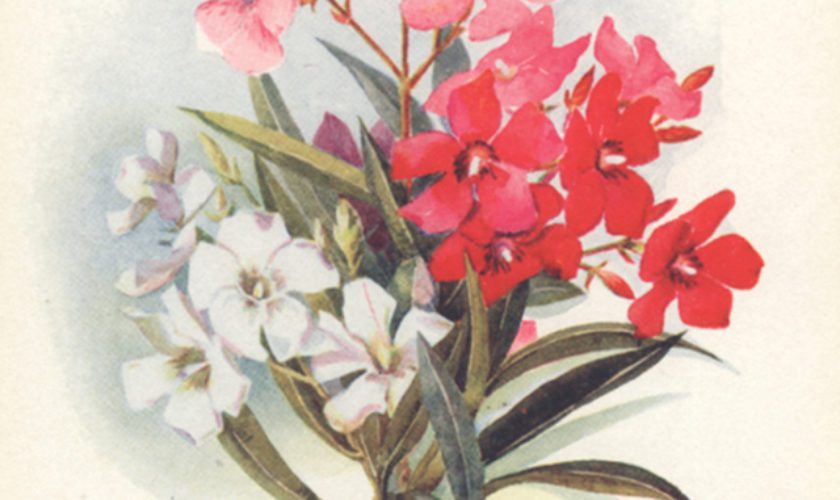 One of the finest floral features of Bermuda is that provided by the Oleander. To fully appreciate the loveliness of the flowers they must be seen, for words can scarcely describe the dazzling brilliance of the Oleanders during the months of May, June, and July. The profusion of bloom during those three months is staggering, to say the least. Although the Oleander is at its best during the period mentioned, it actually starts to bloom during the last week in March and continues to flower until September. It is not unusual to find odd Oleander flowers throughout every month of the year.

The Oleander is a native of the Mediterranean Regions. It is known botanically as Nerium oleander. Records show that the plant was originally introduced to Bermuda in 1790. There are several theories of how the plant was brought to these Islands, but whoever was responsible for the introduction of the Oleander, he could never have imagined what a marvelous asset to Bermuda the plant would eventually prove. This shrub was also known as the South Sea Rose, which name persisted for some time, originating from a story that a former Governor imported the plant for the South Sea Islands. It was not until 1850 that the Oleander was given much attention. About that time people began to realize the suitability of the plant to Bermuda and starting planting it to serve as wind-breaks for the protection of their crops. These hedges grew rapidly. Since that time the Oleander has been regarded as one of the most satisfactory plants for the protection of tender crops against the prevailing winds in all but the very exposed positions. Farmers used the Oleander sticks in former days as lining hoops for potato barrels. It is also recorded that Oleander sticks were part of boat killiks and a green stick with leaves attached made a useful ceiling boom. These were a few of the uses of the Oleander in addition to its purely ornamental value. Returning to the present time, the Oleander is extremely important to Bermuda as an ornamental plant, especially so since the tragic loss of the Bermuda cedar.

There are probably over one hundred varieties of Oleander to be found in Bermuda. The main colours of the flowers are red, pink, yellow and white. Numerous intermediate shades between these main colours are scattered throughout the Islands. Single and double flowers are common. The pink in its various shades is the dominating colour. To some people this persistent pink becomes a little monotonous, but with planting of some of the other shades of colour the monotony of the pink can be broken.

Essentially an evergreen shrub, growing from eight to twenty feet high, the Oleander thrives in practically every part of Bermuda where there is a pocket of soil. Probably the finest plants are to be found in the Somerset area where the soil is light and sandy. The colours of the blooms appear to be more intense and, if possible, the plants are more floriferous at the western end of the Island

The propagation of the plant is extremely simple. Cuttings will root at practically any time of the year. The popular method of raising new plants is to insert both ends of a cutting about twenty inches long into the ground, forming a hoop. Roots will develop at both ends and the young shoots arise from the exposed part of the cutting.