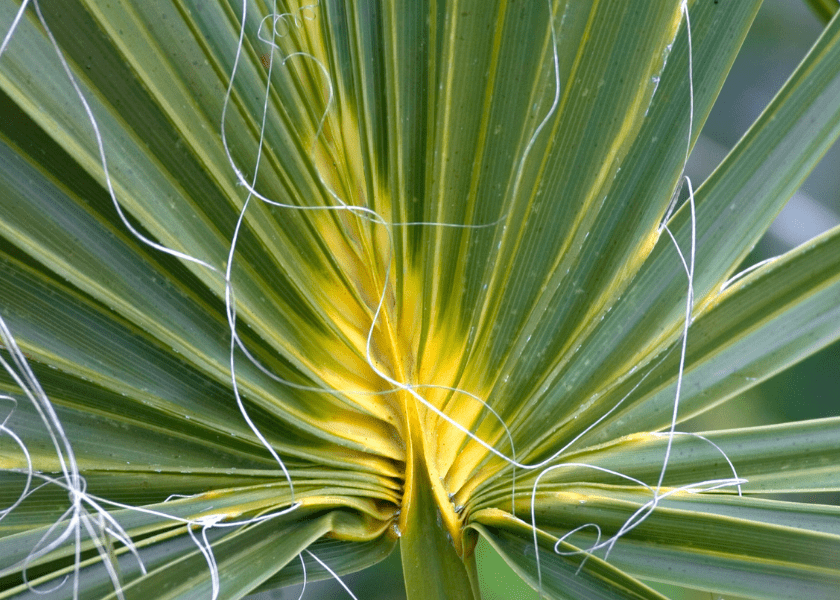 Amongst the seventeen endemic plants of Bermuda, is one palm, Sabal bermudana, popularly known as the palmetto. This palm has undoubtedly figured in Bermuda literature as frequently as the native cedar. May writers have told of the various uses to which the palmetto was put during the early history of the Island; and how fears were expressed that by the ruthless cutting down of the palm it might become extinct. Happily, however, this did not happen for there are still many plants of the species to be found in all parts of these Islands.

The palmetto is easily recognized, for it is quite distinct from the other palms found growing in Bermuda. It has large fan-shaped leaves of a bluish green hue. The trunk varies in thickness from ten to twenty inches in diameter, ultimately reaching a height of approximately twenty five to thirty feet. There is a record of a palmetto growing in the Pembroke marsh which attained a height of over fifty feet by this is not usual. The height and thickness of the trunk depend largely on the depth of the soil in which the plant is growing. In deep soils naturally the palm will grow much larger and faster than in shallow soils. The surface of the trunk is grey in colour and rough to the touch. This roughness is really scar tissue left where old leaves have fallen. In sheltered places the dead leaves remain on the plant for quite a long time, hanging downwards, forming a skirt-like arrangement around the trunk. But in exposed positions the wind soon rips the old leaves off and this picturesque skirt is destroyed.

White flowers appear on the palmetto in June, followed by large bunches of green fruits. These ripen during the autumn and fall to the ground, where they are eagerly sought by rats. Children also enjoy chewing the fruits which are highly nutritious. At one time the seed from the palmetto was used as hog feed and it is recorded that meal from the palmetto berries was carried by Sir George Somers and his party, after a sojourn in Bermuda of nine months to the “starving Colonies in Virginia.”

One of the thickest stands of palmetto can be seen in the Paget Marsh, but it is also found in many other places, frequently in hedgerows. To a limited extent it has been planted, but the majority of specimens seen in private gardens are self-sown. The seed germinates freely in any fertile place and when given a little encouragement the plants develop into good specimens. Like the cedar it is able to withstand considerable exposure and salt spray, although after heavy gales the leaves of the palms near the sea turn brown, giving the impression that the leaves have been scorched by the flames of a fierce fire.

In addition to its usefulness as an ornamental plant, the leaves are used for a variety of purposes. All kinds of baskets, hats, dish mats and other articles are made from the bleached leaves. At one time onions were shipped to the New York market in baskets made from palmetto leaves. The leaves have also been used for thatching the roofs of houses, but very few, if any, such roofs are in existence today.

Most Bermudians have great respect for the palmetto and rightly so. The plant with such an interesting historical background is important botanically since it has not been found growing in the wild state in any other part of the world. To be sure, it has now been introduced to other places. As a valuable ornamental subject, the palmetto should certainly be held in high esteem by its country of origin.