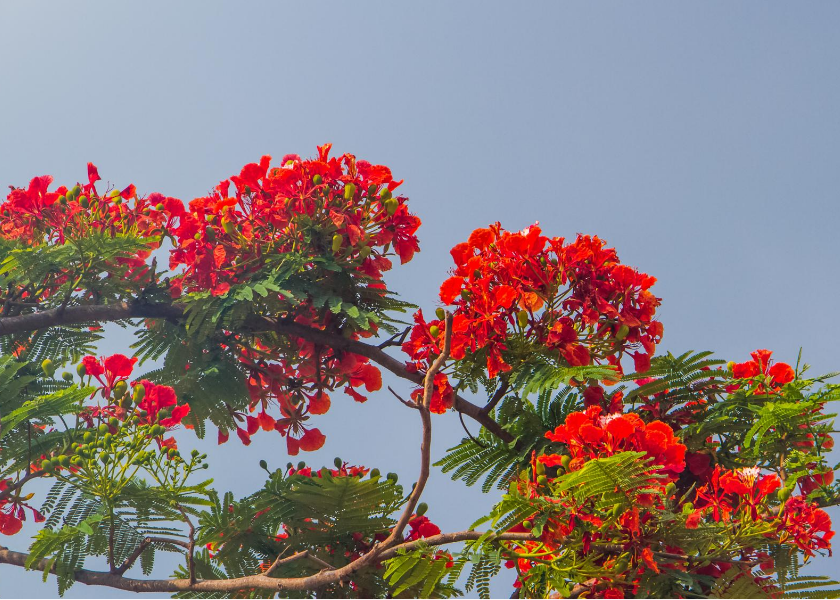 One of the finest shade trees which has made its home in Bermuda is the Royal Poinciana, or “The Flame of the Forest.” Known, botanically, as Poinciana regia, and a native of Madagascar, it was probably introduced to Bermuda about 1870 from the West Indies. This tree is now a favourite flowering subject in most tropical and sub-tropical countries.

Throughout the summer months the Poinciana is clothed in graceful feathery foliage of a beautiful light green shade. The individual leaves are small, arranged in pairs on a stalk about twelve inches long. On this stalk, there are between twelve and eighteen pairs of leaflets. Even on the hottest day in summer the tree presents a very cooling appearance. In fact there is no other tree which produces such wonderful shade with a cooling breeze filtering through the foliage. The branches are large and spreading with a very smooth bark. Some writers have likened the branches of a Poinciana tree to that of an elephant’s trunk. Unfortunately, the limbs are rather brittle and are easily broken especially during windy weather in the summertime, or if children swing on them. The trees for to a height of 30 feet or more. Undoubtedly the most exciting and spectacular feature of the tree is its magnificent display of flowers in July and August, and sometimes as late as September. If the summer is very dry the flowers last much longer than they do in a wet season. These flowers are red and orange-red in colour. Some trees are literally clothed with blossoms from the uppermost to the lowest branches. It is this amazing flowering characteristic which caused the early explorers of Madagascar to name the tree “The Flame of the Forest.” The flowers are followed by long seed pods about twelve long. It is interesting to record that the Poinciana belongs to the large pea and bean family, Leguminosea.

The tree develops a rounded top with pendulous branches resembling a large umbrella. Growth is extremely rapid. It is not unusual for young trees to make eight to ten feet of growth in one summer. In Bermuda this tree is deciduous. The leaves usually start to fall in November and by the end of December the trees are leafless and remain so until the following May. Being such a rapid grower it is quite natural to find the wood of the Poinciana to be very soft. It decays quickly. While there is no authentic record of the life of the Poinciana the writer is of the opinion that the natural span of life of this species in Bermuda is not much more than 60 to 70 years. After that time the main roots begin to rot and the tree collapses.

Despite this last remark the Poinciana is becoming more and more popular in Bermuda. It is being freely planted for shade purposes and for its good flowering qualities. Trees of this type are especially valuable to Bermuda in the present gigantic roadside planting scheme. In view of the fact that the tree has a rather spreading and aggressive rooting system, it should not be planted close to buildings. A space of at least 60 feet should be allowed between the tree and a house or water storage tank. As a specimen tree to provide shade on the edge of the lawn, or similar position, there are few trees to equal the Poinciana. New trees are easily raised from seed. The seeds should be collected as soon as they are ripe and sown immediately. If the seed is stored for any length of time the seed coat becomes very hard and germination is considerably retarded.