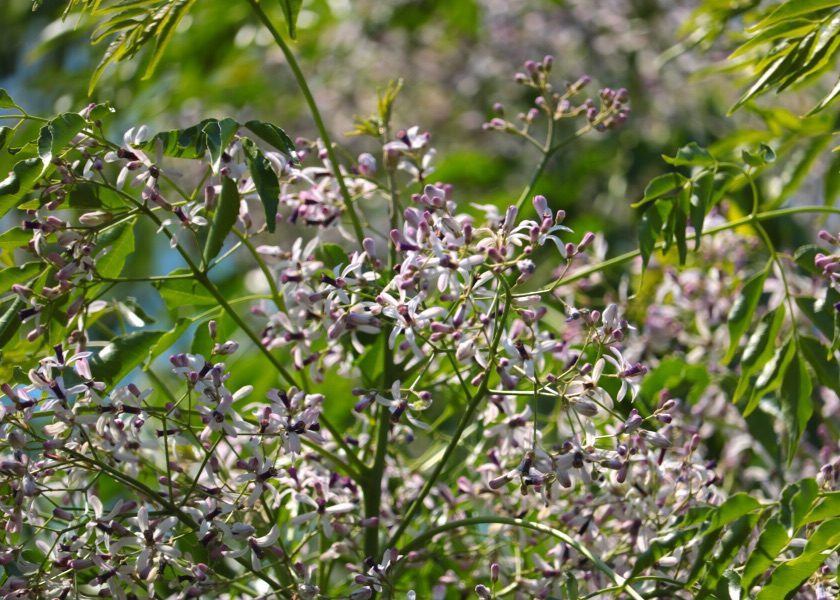 This article was taken from our archives. It first appeared in the June 1953 issue of The Bermudian. It appears here exactly as it did originally.

A very well-known tree in Bermuda is the Pride-of-India, or as some authorities prefer to call it, the China Berry Tree. The latter name is probably as descriptive as the former because the tree is a nature of Asia Minor. Its botanical name is Melia azedarach. Like many other well-known plants here, the Pride-of-India has made its home in most of the tropical and sub-tropical countries, and is now far removed from its original habitat.

The Pride-of-India is one of the oldest introduced inhabitants of Bermuda for it is recorded that it first arrived in this Colony about 1780. It is a deciduous tree, shedding its leaves regularly in October. In March the tree flowers while it is still leafless. The flowers are borne in bunches of a very pleasing lilac shade. Young leaves quickly follow the flowers and in a few weeks the tree is clothed in fresh green feathery-like foliage, making an exceptionally fine shade tree during the summer months. After the leaves have fallen in the autumn, the tree, although leafless, is quite conspicuous throughout the winter months. The bunches of yellow berries stand out very clearly on the ends of branches. These berries remain on the tree until the following spring. The bark of the branches has a slightly reddish coloration and this forms a contrast to the yellow berries.

Despite the fact that some people do not like deciduous trees in Bermuda, it is very interesting to note the changing seasons as depicted by the habits of plants. Possibly this deciduous habit of trees is more fascinating to people whose childhood days were spent in a climate where it is natural to find the leaves falling from the trees as the winter approaches, and to look forward to the advent of spring when the buds which have been dormant all winter begin to unfold their tiny leaves. Far abler pens than mine have described this phenomenon of plant growth and dormancy and how minds are associated with the periodicity of climate change. Indeed, though summer be connected in our thoughts with foliage and flowers, and winter with fallen leaves and the dark tracery of bare boughs, still more is summer linked with sunshine and warmth, and winter with frost and snow. So perhaps, bearing this in mind, it is possible for residents of Bermuda associated thoughts of bare trees with frost and snow do not quite fall into the way of life of a sub-tropical paradise.

In spite of these thoughts, the Pride-of-Bermuda is a very rapid-growing tree reaching a height of 30 feet or more. It will grow under a wide range of conditions, standing considerable drought or rainfall, flourishing near the sea, on the hillsides, and in the valleys. Although the boughs are rather brittle, and many of these may be torn off during heavy gales, the trees quickly recover. In fact the tree responds to hard pruning each autumn and may be treated in the same way as the street-trees are in large cities.

Another interesting feature of the Pride-of-India is that the timber can be used for making furniture. A very nice finish can be obtained, resembling oak. The tree is therefore both useful and ornamental. It could be grown under forestry conditions because propagation is easily effected by means of seed. The seed germinates very quickly and growth is very rapid during the first two years. For timber purposes the young plants should be encouraged to make a clean trunk by removing side growths as soon as they appear up to 10 feet from the ground.