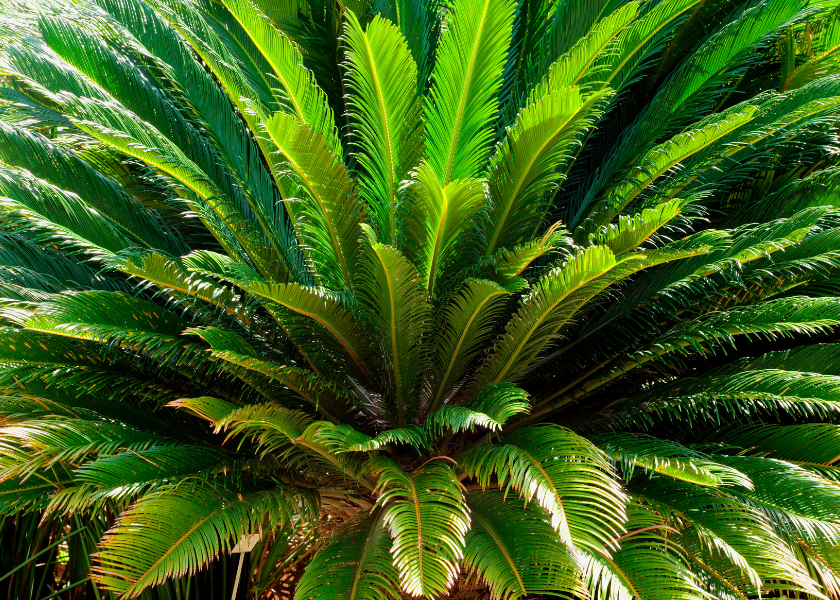 The Sago Palm, well-known to Bermudians, is a representative of the most primitive family of flowering plants. This plant, with about seventy-five other species, are the only survivors of what was at one time an important part of the vegetation of the earth, reaching their maximum about the end of the Triassic and the beginning of the Jurassic periods. It was in this latter period that the ichthyosaurs and other reptiles abounded in the sea with dinosaurs and pterosaurs on the land, and birds first appeared. This then gives some idea of the age of this family of plants botanically known as Cycadaceae. The subject of these notes is Cycas revoluta.

Although the pith of the plant does yield a “sago,” this is not one of the chief plants from which sago is obtained. There are some four to five plants which yield sago, the chief one being Metroxylon rumphii, cultivated in Malaya. The trees are cut down when the flowers appear and the sago is obtained from the pith by crushing and washing.

There does not appear to be a record of the introduction of the Sago Palm to Bermuda, but it is assumed that it is one of the early plant introductions to the Colony. It is a native of the East Indies, but it is more than likely that the plant reached Bermuda via the West Indies.

Probably one reason why the Sago Palm thrives in Bermuda, often in very open and exposed positions, is the fact that the leaves of the plant are very stiff and leathery. These leaves vary from two to three feet in length, with a more or less four angled stalk. The leaflets, numbering about one hundred and twenty, are narrow, four to eight inches long, the middle one being the longest, and are crowded together on the stalk.

Each leaflet ends in an oblique brownish spine. The margins are thickened, shining-green above and paler beneath. The stem of the plant is covered with leaf scars below and densely clothed in leaf bases at the top. It reaches a height of about seven feet, sometimes branching. At the base of the plant numerous offshoots appear in the form of plantlets. These may be removed for propagation purposes.

Of special interest is the flower, which develops in the form of a terminal whorl of brown woolly carpels bearing the large naked ovules in  notches on their margins. The pollen is carried by the wind. When the pollen germinates it does not produce a pollen tube as in a normal flowering plant but develops motile male cells called antherozoids, similar to the ferns. So that although the Sago Palm is classified as a flowering plant it has characteristics of both the flowering and non-flowering plants, such as the ferns, which places it between the two groups.

In many gardens throughout Bermuda the Sago Palm will be found growing in association with other plants. It is a rather stiff subject and may be regarded as an interesting rather than a plant of outstanding beauty. Nevertheless, it has its place in the garden and is relatively hardy. The stiff rigid leaves are often used by florists for making wreaths and similar work. At one time many plants of the Sago Palm in this Colony were seriously infested by a mealy bug, but fortunately this pest has been successfully brought under control by the introduction of a parasite.

Propagation of the Sago Palm, is affected by the plantlets found at the base of the plant which, if carefully removed with roots attached, will grow satisfactorily. Seeds may also be used.