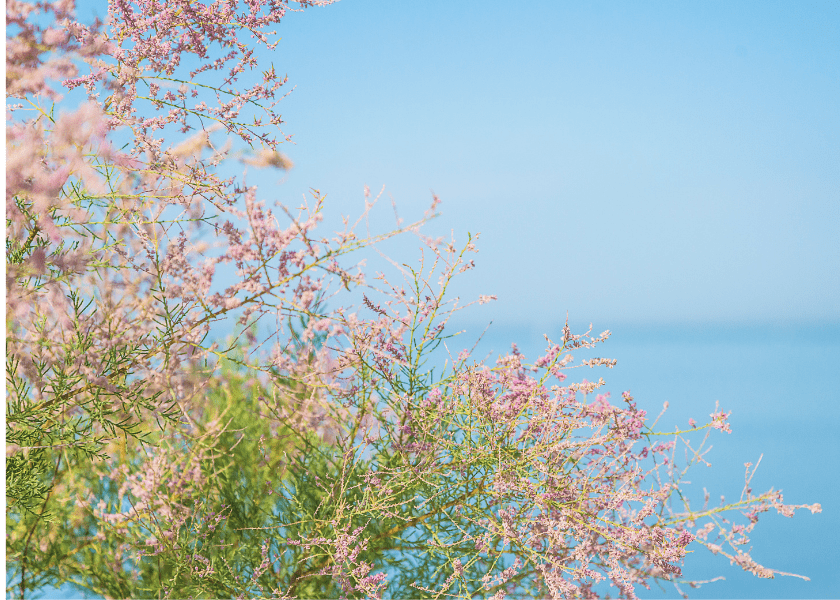 Bermuda is by no means devoid of green foliage, despite the loss of probably seventy per cent of the native Juniper. The subject of these notes, the Tamarisk (Tamarix Gallica), or as many people prefer to call it, the Spruce, is a very popular plant.

It is a native of the Mediterranean region and it is especially suitable to Bermuda because it thrives along the seashore. A particularly fine hedge of this plant stretches from Government House in Pembroke to Shelly Bay, distance of about four miles. This hedge makes an excellent wind break and is appreciated by tourist and residents alike when cycling along this stretch of the North Shore Road, especially on a windy day. Apparently the plant was introduced to Bermuda over one hundred years ago by Governor Reid. One cannot help being charmed by the gracefulness of the feathery light green foliage. It is especially pleasing to find large well grown plants of the Tamarisk on a hot summer’s day, for they seem to radiate a cooling effect on all who pass or stop during the early summer months. The individual flowers are spectacular in a quiet sort of way. During the summer the Tamarisk grows very rapidly and all the young shoots have a pink tinge. The stems are a reddish brown in color which makes a pleasant contrast to the light green foliage. It is easy to see how the name “spruce” became attached to this plant, for the leaves resemble those of the northern tree of this name. The tiny scale-like leaves adhere tightly to the glass that the true structure is revealed. Looking at the leaves with the naked eye they appear as a thin needle-like column with numerous branchlets, which accounts for the light feathery appearance.

It would be difficult to find a more charming plant or one more suitable to Bermudian conditions. For the very exposed positions near the coast the choice of plants is extremely limited, but undoubtedly the Tamarisk is seen at its finest in these areas. Because it grows so profusely along the shore, forming large masses in such places as the Fort Road, St. Geogre’s, the North Shore Road almost continuously from Spanish Point to Shelly Bay, and around Cambridge-Beaches in Somerset, some people may assume that it will not thrive inland. This, however, is not the case, for some fine plants are to be seen at the Agricultural Station, which is as far from the sea as any property in Bermuda. In the very exposed positions the Tamarisk loses its leaves in the winter time, but in the sheltered places it retains its foliage all the year around. It is an essentially a spreading shrub, reaching a height of twenty or more feet, but it develops some very thick stems. On some of the old plants the steams are from six to ten inches in diameter. An interesting feature of the Tamarisk is that it does not produce seed, hence the plant is exclusively propagated by cuttings or to use the popular local term “slips”. This is obviously an advantage since a plant which grows so vigorously could easily become a pernicious weed, if it produced viable seed, as has already happened with two plants introduced to Bermuda. These are, the Allspice dominating Warwick hillsides and the Simple Leaved Jasmine which has overrun the trees in the Walshingham area between the Harrington Sound and Castle Harbour. There is always this risk when introducing plants to a new home. Some just exist, other grow freely where planted, some grow profusely and spread beyond their allotted space and some simply die. In the case of the Tamarisk in Bermuda it relies on the hand of man to assist its propagation and therefore can only spread as man so desires.