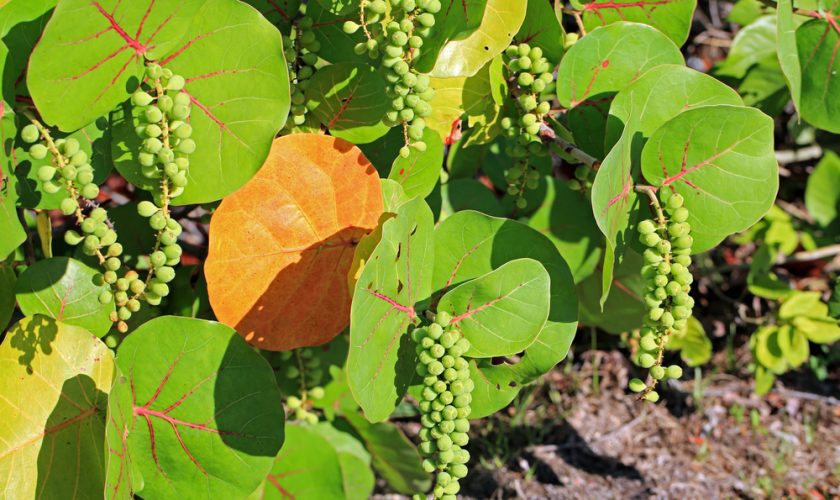 An interesting plant found growing along the seashore is the Bay Grape, or Coccolbis uvifera. Although it is a native plant of Bermuda, it is also found in Southern Florida, along the continental American Coasts and the West Indies.

It is assumed that this plant originally reached Bermuda by the seed floating across the sea. This is, or course, theoretical, but there is evidence to support such a theory since the original and most abundant thickets of the Bay Grape are found along South Shore in Paget. The plant is rarely seen on the North Shore of the Island and is only found inland where it has been planted by the human hand. It is then quite feasible to presume that seeds did float across the sea from either Florida or the West Indies.

While the Bay Grape may appear to be restricted to certain parts of the South Shore it does not imply that the plant will not thrive inland or along the North Shore. On the contrary, it will flourish in practically any situation on these Islands. For this very reason it may be regarded as one of Bermuda’s most valuable assets among ornamental flora. Growing as it does along the seashore it can withstand the high winds and salt spray, a quality which is essential when considering plants for exposed positions. It is also one of the most handsome of the seaside plants, characterized by the large saucer-shaped leaves. These bold leathery leaves of a pleasing bronze green shade give the plant a very stately appearance. Individual specimens will grow up to 40 or 50 feet high, but with judicious pruning the height may be restricted to a mere 7 or 8 feet. As the young leaves unfold they are no longer than a half-penny, but they grow very rapidly and soon reach their normal size, approximating that of a bread-and-butter plate. During the late winter and early spring most of the old leaves fall but the plant is quickly re-clothed with new leaves in the late spring. The flowers appear during the early summer. These are very small and creamy-white in colour. They are followed by the fruit, which resemble bunches of grapes. They fruits are edible but not very palatable. They are sometimes used for making preserves.

The Bay Grape is easily propagated by seed. Fruits which fall to the ground give rise to young plants the following summer, hence many seedlings are found at the base of the parent plants, especially where the soil is light and sandy.

As an ornamental plant for the exposed situations the Bay Grape is very difficult to beat. Occasionally people will condemn the plant for the habit of shredding its large leaves, but this is a characteristic of all plants whether they be recognized as evergreen or deciduous. In the case of evergreen plants a few leaves fall the year round which are not readily noticed. With the deciduous types the leaves fall off within the period of a month or so and this to many Bermudians is a feature to which they are not fully accustomed. The native cedar tree is largely responsible for this objection to deciduous plants for the cedar is an evergreen tree. The scale-like leaves are so inconspicuous that when they fall to the ground they are scarcely visible, hence little raking or cleaning around the cedar tree is required. Despite this objection the Bay Grape is gradually gaining popularity and all who include this valuable subject in their planting projects realize the enormous value of a plant having so many desirable features.