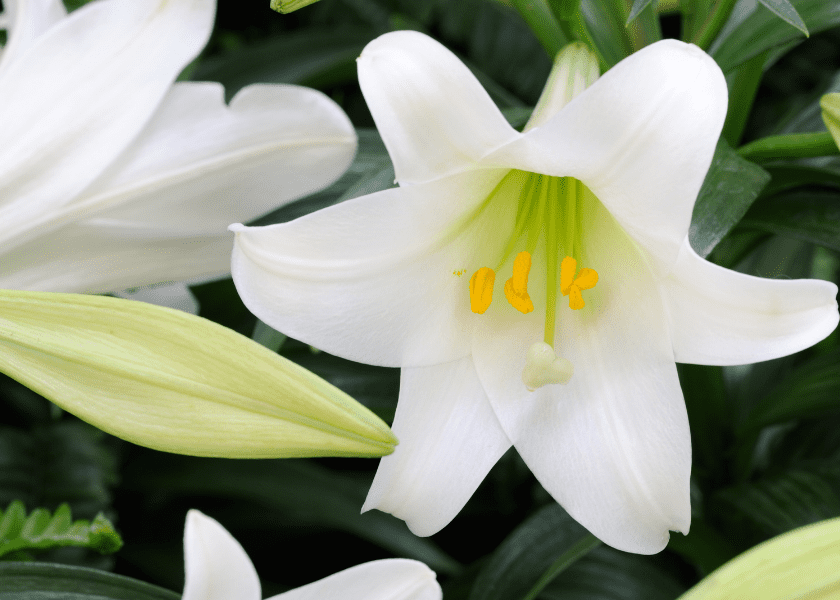 One of the finest flowering plants ever to be introduced to Bermuda is the Easter Lily. As its name implies, Lilium longiflorum var. eximium is a true lily. Many plants, because they have a bulbous rootstock, are classified under the general term “lilies” for want of a better term, but the plant under discussion here can legally claim the name lily as its correct name. There is no finer spectacle than to see these lilies in full bloom when grown under field conditions. The magnificent pure white trumpet-shaped blooms, from three to six inches across the mouth of the flower and with yellow stamens, remind one of the well-known quotation from the New Testament: “Consider the lilies how they grow, they toil not, they spin not and yet I say unto you that Solomon in all his glory was not arrayed like one of these.”

Before World War II, St. David’s Island used to be the chief lily-growing district. It is recorded in the Annual Reports of the Bermuda Department of Agriculture that from 1927 to 1941 sixty-seven percent of the total acreage of lilies was grown on that Island. Well-known, long-established growers, namely, Howard Smith, Reeve Smith, Eugene Outerbridge and Malcolm Hollis, all grew lilies on St. David’s. The soil in that area was regarded as some of the most satisfactory for the cultivation of the Easter Lily. In those days, during the Easter season, many people, both residents and visitors would make a special journey to St. David’s either by horse and carriage or the faithful bicycle to see the lilies in full bloom. Unfortunately, during the war, all the lily-growing area of St. David’s was swallowed up in the construction of Kindley Field, the U.S. Army Air Force Base. The growers were compelled to move to other parts of the Island.

It is interesting to record that although the correct botanical name of the plant is Lilium longiflorum var.eximium, other names will be quoted if one talks to the growers. Lilium Harrisii is a name of long standing. Bulbs imported from Bermuda by an American lady came into the hands of a Philadelphia nurseryman, W.K. Harris, some time before 1883. Harris named the plant after himself, a not infrequent vanity among commercial growers, and put it on the market as Lilium Harrisii, a name which has stuck to it ever since. The variety Howardii is a much earlier type than Harrissi and was raised by Mr. Howard E. Smith of St. David’s Island. For his valuable work on the Easter Lily, Mr. Howard Smith was honoured in 1948. He was appointed to be a Member of the Order of the British Empire by His Majesty the King in the New Years Honours List. Mr. Smith’s work amongst the lilies was an extremely valuable contribution to the Bermuda Easter Lily industry since, as a result, lilies now bloom from January to June.

At one time there appeared to be a slight confusion in the exact date of the introduction of the Easter Lily to Bermuda. Writing in the Agricultural Bulletin December 1926, Mr. L. Ogilvie stated that the lily was introduced to Bermuda in 1887. Two Bermudian authors, however, namely, Mrs. Louis Hutching Smith (“Bermuda’s Oldest Inhabitants”) and Mr. E. A. McCallan (“Life on Old St. David’s”), both relate the same story of how the Easter Lily was accidentally introduced to Bermuda by a missionary in 1853. This latter date is probably correct for there is evidence to support it. In the Bermuda Library there is a portfolio of water colours of Bermuda flowers by a Dr. Cogwell who visited Bermuda in 1856. The drawing of a Bermuda Easter Lily, dated 12th April 1856, is essentially the same as L. Harrisii. The tree authors agree that the bulbs were first cultivated in the gardens in St. George’s.