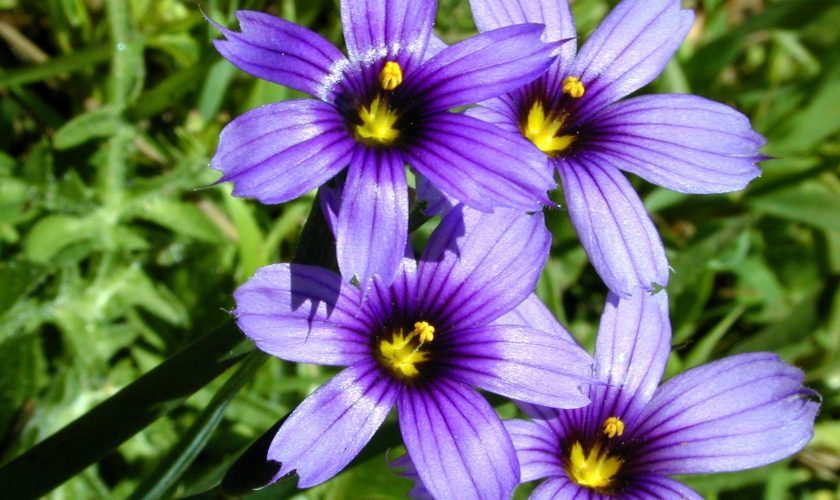 The article was taken from our archives. It first appeared in the May 1953 issue of The Bermudian. It appears here exactly as it did originally.

One of the few endemic plants of Bermuda is a plant of the Iris family Sisyrinchium bermudiana, popularly known as the Bermudiana, Bermuda Iris, or Bermuda Blue-Eyed Grass. This beautiful little plant blooms during the month of April and is easily recognised by the lovely violet blue flowers on stalks not more than twelve inches high, growing freely on the grassy slopes and other places where the soil is not disturbed. In some places such as Devonshire Bay, large masses of this Iris will be seen, giving the effect of a beautiful blue carpet. It flourishes in all open dry sunny positions, thus it is not surprising to find that the plant is spreading in areas which were previously thickly covered with cedar trees.

The Bermudiana has typical smooth linear Iris-like leaves which begin to appear above the ground in September or October, but as the leaves resemble blades of grass they are not readily observed until the flowers appear in April. As already stated, the flowers are violet-blue in colour with yellow bases. There are five petals to each flower, each stem bearing several flowers. The plant blooms for about one month. Following the flowers, seed pods develop. These seed pods, when ripe, divide into three sections, liberating a number of small dark-brown round seeds, which fall to the ground. Under normal conditions of growth, the seeds germinate during the following autumn. After the seeds have ripened the plant dies down, remaining dormant until the late summer, when growth again commences to yield ultimately another beautiful display of flowers.

Being a native plant, it is surprising that this pretty little Iris is not used more freely in Bermuda gardens. Occasionally it is seen in some garden where it responds to cultivation. The plants become larger and are more clearly seen to greater advantage when they are not surrounded by grass and other vegetation. The dry banks often used as rock gardens are ideal places in which to establish the Bermudiana. There is no difficulty obtaining plants, because ample seed can be collected from the wild plants. This seed germinates easily when sown under garden conditions.

In the “Flora of Bermuda” by N. L. Britton, an interesting note appears on this plant. For many years, the Bermuda Sisyrinchium was regarded the same as a North American species, but it was definitely established by Hemsley in 1884 that the Bermuda species was a distinct species. This plant has never been collected as a wild plant elsewhere. The theory was advanced by Hemsley and other botanists that S. Bermudiana originated from seed of an American species, brought to Bermuda by a bird or on the wind, and the plant became differentiated through isolation. Another interesting record is that the oldest specimen of this lovely plant is one collected by J. Dickenson about 1699, preserved in the Sloane herbarium at the British Museum of Natural History.

Sisyrinchium bermudiana is a plant that Bermudians should be proud to possess. It deserved greater popularity than has been given the plant in the past and should be classified as a good garden plant. The Freesia is extremely popular, commonly naturalized in the grassy areas of the garden. Why not treat the Bermuda Iris in the same way? The result would be extremely pleasing to have such an interesting Bermuda plant well established in many more gardens. A place could also be found for this little plant in the border of bulbous flowering plants. It should be borne in mine that the Bermudiana is a sun-loving plant, and for best results it is advisable to plant it in open sunny locations.