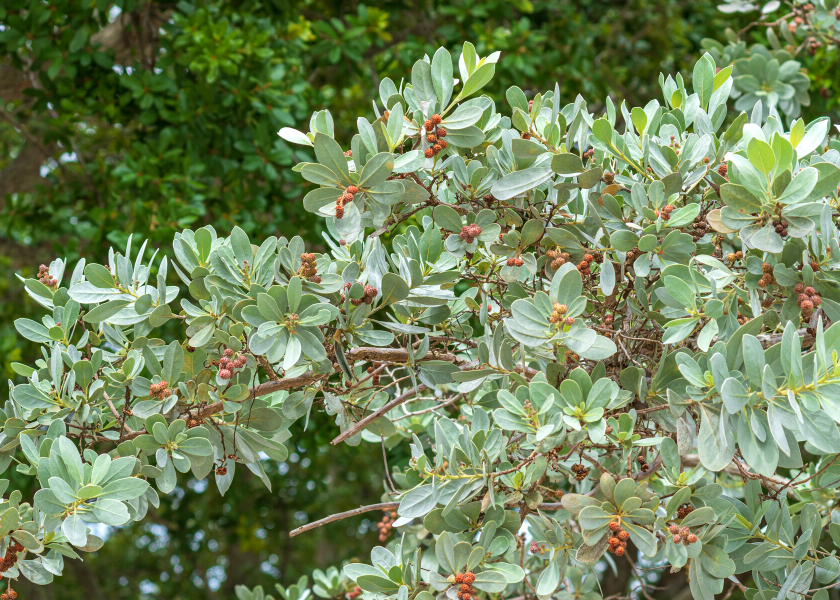 This article was taken from our archives. It first appeared in the July 1952 issue of The Bermudian. It appears here exactly as it did originally.

Rambling along the sea shore one is frequently confronted with a glossy green shrub or small tree growing in among the rocks just above high tide level. This plant is known locally as the Buttonwood, but botanists prefer to call it Conocarpus erectus.

The Buttonwood is a native species, but is also found along the Florida Coast, the Bahamas and in other West Indian islands. Some authorities feel that this plant probably reached Bermuda by the seeds floating across the sea. Flowers appear on the plant from July to September. These are small structures, devoid of petals, with numerous stamens. The fruits are scaly, somewhat resembling a small mulberry fruit. It is clothed at all times of the year in dark glossy-green leathery leaves, which makes this a most attractive plant, especially in association with the rugged coast line. In the sheltered positions the buttonwood develops into an erect tree up to 15 feet in height, but in the wind-swept areas it assumes a very prostrate habit.

One of the most remarkable features of the plant is its ability to grow into comparatively large specimens in the crevice of a rock. It is amazing to see how the thick wire-like roots have twisted themselves around the rocks to find the soft places. An enormous amount of the plant’s energy must be absorbed in the formation of roots. This root formation is essential, firstly as an anchorage, since the plants have to stand up to the full force of the wind from the open sea and secondly to seek food and water of which both are only present in very limited quantities. Growing right on the edge of the coast the leaves are frequently washed with with salt water. This does not harm the plant because the leaves are thick and leathery and are thus fully protected against all types of weather experienced on the sea shore.

Several of the native plants of Bermuda have interesting histories, and the buttonwood is no exception. It is related by various writers to the early history of Bermuda that the settlers found the buttonwood to be most suitable for the tanning of leather. In 1651 the tanning of leather was referred to here as a trade. At about this time complaints were often made that not only natives but strangers were in the habit of cutting down the buttonwood and even digging up the roots for leather tanning, thus threatening the extermination of the plant. A law was accordingly passed prohibiting the digging up of the roots and stipulating that a stump of at least two feet high in every case must be left. The penalty was a fine of ten shillings for every root destroyed. In those days ten shillings as a considerable sum of money, and its present day value does not convey the importance attached to the crime. By 1697 the Governor found it necessary to prohibit by proclamation the use of buttonwood for fuel. This apparently became necessary in view of the increasing demand for material for tanning purposes.

From these reports it would appear that the buttonwood was found growing in larger areas than it does today. It is a slow-growing subject and the seeds take a long time to germinate. The writer has on several occasions sown seeds of the buttonwood without success. It may be necessary however to water or soak the seeds in salt water, in order to obtain similar conditions in which the plant grows naturally. Without a doubt the buttonwood is much admired by all who wander along the sea shore. It makes such a pleasant contrast to the grey rock and thrives in positions where little else grow. It should therefore not only be protected in our time, but propagated with the object of using it in new planting schemes on properties bordering the sea.