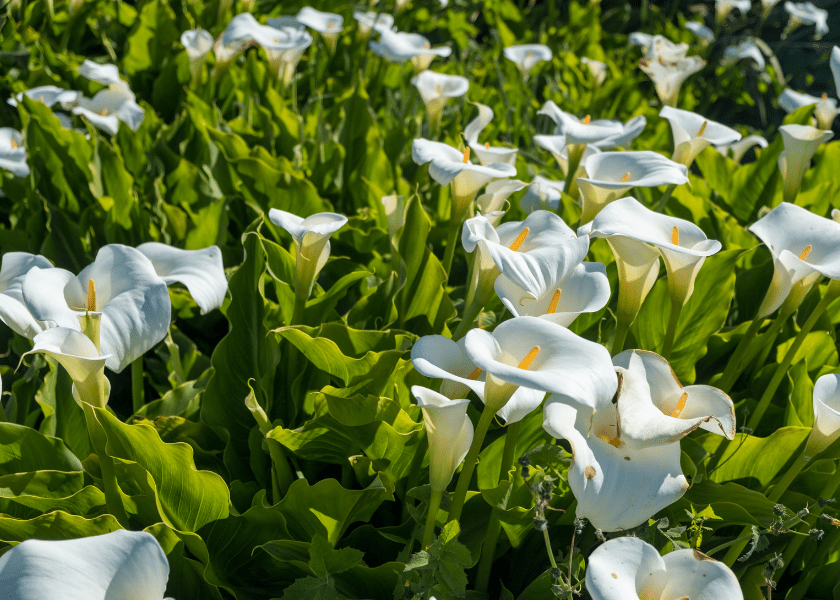 The Calla Lily of horticulturalists and the so-called Calla Lily of gardens is known botanically as Zantedeschia aethiopica. Originally this plant was named Calla aethiopica, later on its name was changed to Richardia Africana, but it was discovered by further research that Richardia of Kunth was antedated by another Richardia so a new genus was created. Zantedeschia is therefore considered by the latest  authorities to be the tenable name and is retained in the “Nomina conservanda” of the International Rules as the correct botanical name of this plant. Despite the work of the botanists, the name Calla has been retained by the horticulturalists throughout many parts of the world. Other common names are in use such as, Lily-of-the-Nile and Trumpet Lily, while in England most people in the gardening profession know the plant as Arum Lily.

There are some eight species of Zantedeschia, but only three are well-known. Z. athiopica has large creamy white flowers, Z. elliottana has golden yellow flowers, and A. Rehmannii is the pink Calla. This last is a dwarf species.

In Bermuda the white Calla is well-known. It was introduced many years ago as a garden plant and in some places in the marshy areas it has become naturalized The yellow Calla is of more recent introduction and is cultivated by the florists in limited quantities. Some very fine blooms of the yellow Calla were shown at the Agricultural Exhibition held in April.

The subject of these notes is a herbaceous plant, with long petioled leaves, arising from a thick rhizome of tuber. The flowers are creamy white with a central yellow spadix. Flowering usually takes place during April, May and June. The Plants require a deep loamy soil with plenty of moisture at the roots during the flowering season. In addition to the plant’s value as a garden subject, it is also valuable as a cut flower. It is not cultivated here extensively for two main reasons. Firstly, the flowering season coincides with that of the Easter Lily and second, it only thrives in very moist soil. However, the Calla Lily is found frequently in gardens and has obviously escaped from cultivation, for as already pointed out it has become naturalized in some of the marshes. This fact was noted over forty years ago when “Flora of Bermuda” was written.

Propagation is easily affected by suckers which are produced in quantity; they may be taken off at practically any time, but the best time in Bermuda is regarded as February or March. Planted in rich moist soil these suckers will grow rapidly.

When writing of the propagation of the Calla Lily, the writer is always reminded of the so-called initiation into the art of gardening by the practical joke played on garden boys in England by the more senior gardening staff. The tuber or stem of these aroid plants is composed of numerous very thin tube-like structures. If a small piece of the tuber is placed in the mouth and chewed, these thin tubelike structures penetrate the tongue, causing a most unpleasant burning sensation which often lasts for several days. The innocent garden boy is lured into the trap and vigorously chews a piece of the Calla tuber to the great amusement of the other members of the staff.
All the Calla Lilies may be raised from seed and many pleasing varietal forms may be obtained in this way. The seed should be sown in an open seed bed under semi-shaded conditions and kept well watered. It is preferably to leave the resulting seedlings in the seed bed for about twelve months before transplanting them into their flowering quarters.