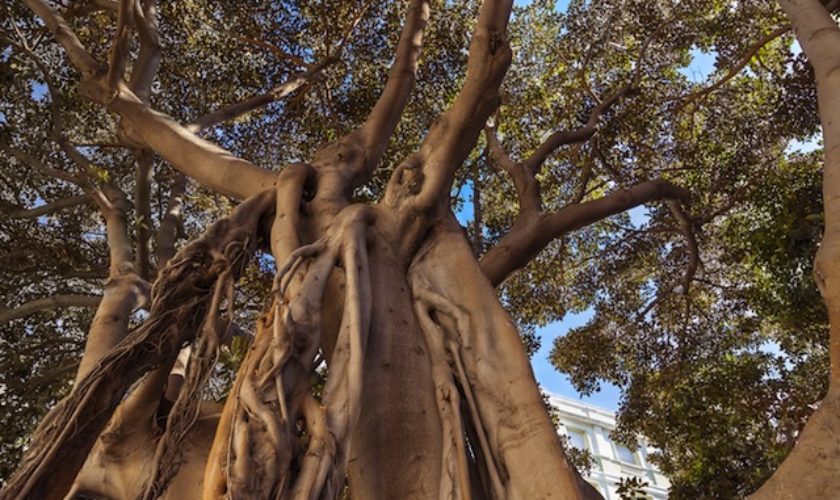 Of the introduced trees, which have found Bermuda to be an ideal environment, the India-rubber tree is undoubtedly the most conspicuous and probably commands more attention than most of the others. The gigantic limbs, the large leaves and the amazing rooting system all contribute to the interest in the species. This tree is a member of the fig family, known botanically as Ficus elastica and is a native of tropical Asia.

It is recorded that the India-rubber tree was first brought to Bermuda by Lady Turner, the wife of the Governor of these Islands in 1826. Although it has not been planted extensively, there are several exceptional specimens. The most notable is the one at Par-la-Ville, Queen Street, Hamilton, whose history is well-known. It was planted in 1847 by a Mr. W. B. Perot. Other land marks are the tree in Reid Street at Spurling’s Stables, which certainly could relate many interesting stories of local personalities if it were able to speak, the specimen at the Colonial Secretariat, and the much photographed tree in the Agricultural Station. In addition to these, others will be found on large properties in several parts of the Island.

In its native habitat of the outer Himalayas from Nepal to Assam, in the Khasia Hills and Burma, Ficus elastica sometimes reaches 200 feet in height. It does not grow quite so high in Bermuda, but nevertheless it assumes very large proportions. The leaves are oblong alliptic with an abrupt dull point 6 to 18 inches long and 3 to 6 inches wide. They are leathery in texture with transversely parallel veins at almost right angles to the mid rib, dark shining green above the yellowish green beneath. The young leaves are enclosed in a rosy sheath. Although rather inconspicuous compared with the rest of the tree, the fruits are in pairs at naked nodes, greenish yellow in colour.

Many species of Ficus form aerial roots by which the branches maintain contact with the ground. The subject of these notes, while occasionally producing aerial roots, cannot claim this as one of its main characteristics. However, the underground rooting system is an intricate network of roots running in every conceivable direction. These roots extend far in extent of the branches. Some idea of this network of roots may be gained from the tree at the Agricultural Station where, due to soil conditions, many of the roots are exposed well above the surface of the soil. Another feature worthy of note is the almost horizontal position of some of the main branches. Some of these limbs are at least twelve inches in diameter and maintain the horizontal position for a distance of 20 feet from the trunk.

Possibly of even greater interest to the average visitor is the milky juice which oozes out of the branches when the bark is cut or broken. This tree, then, is one of the plants that yield rubber or Caoutchouc, obtained by agglutinating the milky juice. The word rubber is sometimes used to denote the crude product and Caoutchouc the pure hydro-carbon isolated from it. Although this tree is named the India-rubber tree, this species is not now grown for the production of rubber. Hevea brazilleinsis, an upright-growing tree, is the species used for this work. Due to its habit of growth it is much easier to obtain the milky juice or latex by the modern methods of tapping. Nevertheless, Ficus elastica was one of the first trees to be used for the production of this most important and useful commodity essential to our present day needs known as rubber.

Propagation is effected by stem cuttings inserted in a sandy compost. The cuttings should be about 12 inches long. To obtain larger plants the air layering method of propagation may be adopted.