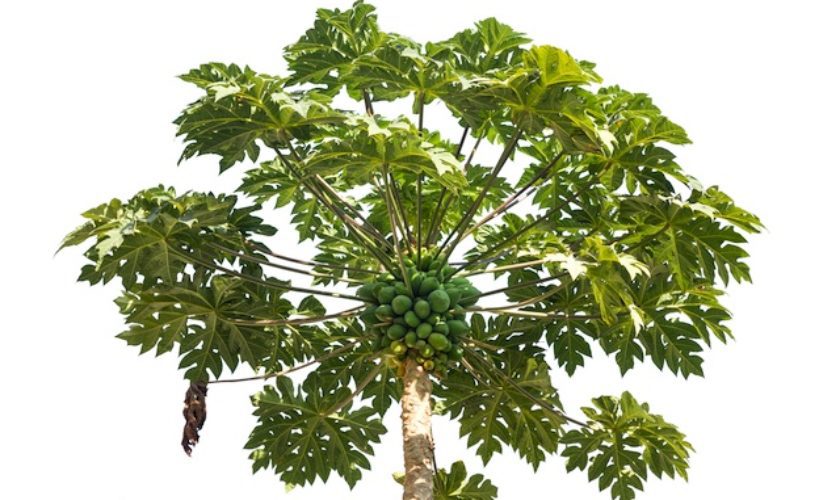 This article was taken from our archives. It first appeared in the October 1952 issue of The Bermudian. It appears here exactly as it did originally.

A well-known plant found in most tropical and sub-tropical countries is the Papaw or Papaya, Carica papaya. It is a native of South America and is extensively cultivated in the tropical parts of the world for its edible fruit. These fruits somewhat resemble melons and are usually eaten in the same way. They vary much in size and shape, from spherical to long and pointed; they are orange-coloured when ripe, with edible flesh of the same colour and large number of small black seeds surrounded by a gelatinous substance. The Papaw fruit is a good source of Vitamic C. Papaw used in the treatment of dyspepsia is made by evaporating the milky juice obtained from incisions in the unripe fruits. The milky juice is also useful for making meat tender. In fact, wrapping meat in Papaw leaves has a similar effect.

The Papaw is a small soft-wood tree with an erect stem rarely branching but occasionally giving rise to stem suckers. It is a curious looking plant and invariably attracts a great deal of attention for it grows to a height of from 10 to 30 feet with a trunk from 6 to 12 inches in diameter tapering towards the top which is surrounded by a crown of palm-like leaves. The leaves vary in size; sometimes they are 2 feet in diameter with a leaf stalk of about 24 inches long, swollen at the base. Each leaf is deeply incised.

An interesting feature of the Papaw is that there are two kinds of fruit-bearing trees. The male, a non-fruiting type of Papaw is well-known, likewise the female tree which bears the fruit, but the hermaphrodite tree, also fruit-bearing, is not generally recognized. It may be said that the Papaw is quite a mix-up compared with many other plants. Some trees bear only male flowers and others only female, while others again have perfect hermaphrodite flowers. Occasionally too, a male tree will have a fre hermaphrodite flowers and will set fruit, usually at the end of a long, flowering branch and frequently a hermaphrodite tree will have some male flowers unable to set fruit.

The female tree is easily recognized. The flowers are large (from 2 to 3 inches across) bell-shaped and are borne close to the main stem. Them ale tree is also quite distinctive with many small flowers usually borne on branching stalks. In the hermaphrodite tree the flower is usually placed close to the main stem as in the female tree, but it is intermediate in size between the male and female flowers and have both stamens and pistils well developed.

In Bermuda owing to the high proportion of male trees which are growing, pollination which occurs naturally, either by insects or by wind, is likely to result in seed of which about half will produce male trees. The most satisfactory method to obtain seed which will give rise to fruitful trees is by hand-pollination, using pollen from a hermaphrodite tree. A little time and trouble taken in this way would ultimately improve the productivity of the Papaw in Bermuda.