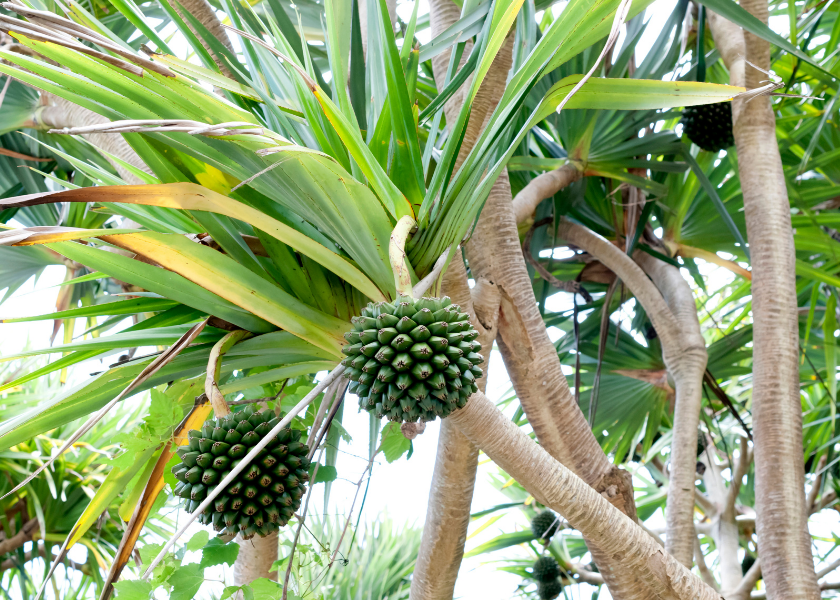 This article was taken from our archives. It first appeared in the September 1954 issue of The Bermudian. It appears here exactly as it did originally.

One of the more curious trees found growing in Bermuda is the Screw Pine, which never fails to attract attention. It cannot be classified as a very beautiful plant, but it has character and elegance and it fits into various types of planting schemes. Even as a specimen plant on the lawn it often provides the desired effect where other plants may fail. The Screw Pine is reasonably hardy and will stand a considerable amount of exposure in the unprotected areas. Like any other plant, of course, it assumes its best proportions when a certain amount of protection is available from the prevailing winds.

Native of the old world tropics, Madagascar, the Screw Pine is known to botanists as Pandanus utilis is the largest of the genus. It may reach a height of fifty to sixty feet, but the majority of the specimens in Bermuda do not grow as tall as this. Some plants known to the writer are about thirty feet tall while others are smaller. The leaves are often over three feet in length with very spiny margins, pale green in colour and rigid. They are arranged in a spiral fashion, which gives the effect of screw-like appearance, hence the common name, Screw Pine. The trunk is erect, but branching commences early in life and curious ariel roots are emitted. These roots are quite thick and smooth. They do not develop thin fibrous roots like the rubber trees, but remain straight growing downwards until they reach the soil, forming a buttress-like appearance round the trunk. Botanically, the Screw Pine is dioecious, having male and female flowers on separate plants. Undoubtedly, the male plant is the more showy specimen at flowering time. It bears huge catkin-like flowers with a vast quantity of pollen. The flowers of the female plant are less conspicuous, but the fruit which follows flowering makes up for any lack of interest in the flower. The fruits when ripe are six to eight inches in diameter. They resemble a globe covered in beads. These bead-like appendages are the seeds and turn a golden colour as they ripped, at the same time producing a pleasing aroma not unlike the odour of a ripe pineapple. The individual seeds gradually fall from the centre part of the fruit, leaving objects on the plant looking something like dirty tennis balls hanging from the branches.

An interesting factor in the germination of the seeds of this plant is that frequently young plants will be found growing around the parent plant where the seeds have fallen. This usually happens when the soil is soft and moist in a reasonably sheltered location. Strangely enough, however, the writer has often experienced the seeds of the Screw Pine failing to germinate when collected and sown under ideal conditions. While no data has been made on this question of germination of the Screw Pine seed, it does appear that the viable period of the seed is very short, therefore unless the seed is planted immediately on ripening, germination cannot take place. There may also arise the question of adequate pollination. If the male and female trees are growing side by side, there is every chance of the seeds being fertile, but when the male and female plants are separated by more than a few yards, it is quite possible that pollination is not properly effected. This is necessarily speculation on the part of the writer, because a proper study of the question has not been made, but it would be of interest to determine the reason for this disparity in the germination of the Screw Pine seed, and anyone having the time and inclination would find it an interesting study.