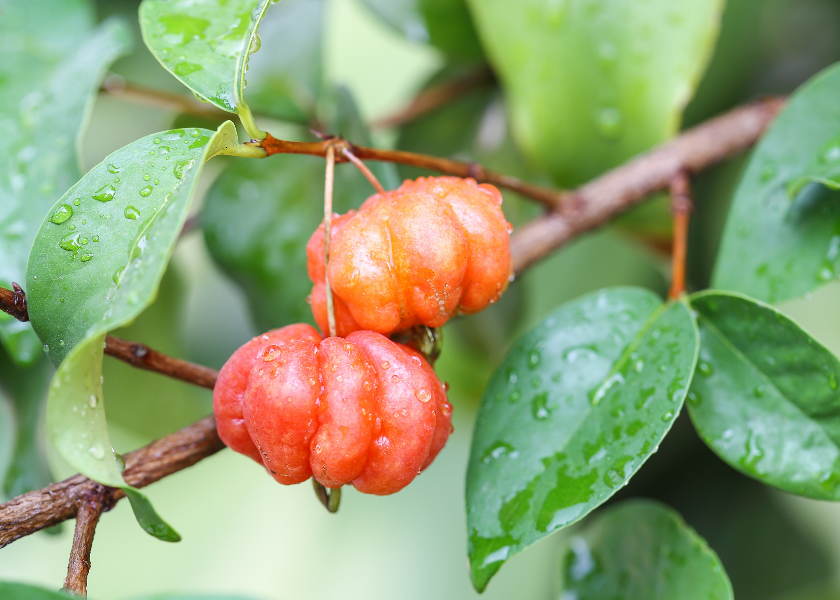 This article was taken from our archives. It appears here as it did originally.

The Surinam Cherry is another example of an introduced plant finding its new home entirely satisfactory to its growth and development, so much so that N. L. Britton regarded this plant as naturalized in Bermuda when he published “The Flora of Bermuda” in 1918. Actually, the Surinam Cherry is a native of South America. Its introduction to Bermuda is somewhat obscure, but it is assumed that it was one of the many plants introduced here during the middle of the nineteenth century. Despite the fact that during the period 1910-1914 many of the plants were cut out and destroyed because the fruits harboured the Mediterranean fruit fly, a serious pest of peaches and other fruits, there is an abundance of this plant all over the island at the present time. Most people know the plant as “The Cherry,” and the word “Surinam” is rarely used when referring to the plant.

Botanically, the Surinam Cherry is known as Eugenia uniflora. It is a shrub or small tree growing up to about fifteen feet high, with ovate dark green leaves shining above and paler beneath. The small while flowers appear in the springtime and these are followed by deeply furrowed fruits. When ripe, the fruits are bright red in colour, and being edible, the fruits are eagerly sought by children, who eat them with considerable relish. New-comers to the Colony, who have not acquired a taste for this fruit, often express disappointment when eating the first berry, and declare the fruit has a flavour resembling turpentine. In former days, when the housewife spent much time making preserves from the product of the garden, the Surinam Cherry was used extensively for making jams, jellies and wine, but nowadays little use is made of this fruit, although it still possesses its excellent qualities for preservation.

As a garden plant, the Surinam Cherry has many desirable qualities. It may be used to form the background of a shrub border, used for screening purposes, as specimen plants or as hedges. The plant is attractive at all seasons. In the first place, it is an evergreen subject. When in flower, the thousands of small white flowers give a very pleasing soft appearance and never fail to attract attention. During the flowering season, the plants are alive with honey bees collecting nectar and pollen. Finally, there is the period when the plants are clothed with the bright red fruits, which in themselves are most decorative. Very fine formal hedges can be grown by using the Surinam Cherry. With judicious clipping, the hedge can be kept fully clothed in foliage from the uppermost part of the plant to the ground, a most important feature of a good hedge. A plant having so many desirable qualities is well worth including in the garden despite the fact that it is found growing freely in so many parts of the island.

Propagation of this subject is easily effected by seed. The fruits fall to the ground and quantities of seedlings will be ground around the adult plants. These seedlings, however, do not transplant well with bare roots. It is therefore more satisfactory to raise the seedlings in tins or pots and transplant them into their permanent quarters when large enough. Seeds may be sown in situ. This is undoubtedly the best way to start a cherry hedge. The seeds must be planted as soon as they are taken from the fruit. If allowed to dry out before planting, germination is very poor. Under ideal conditions, the seed will germinate in from three to four weeks. It is not essential to move the fleshy part of the fruit before sowing, and the whole fruit may be planted with equally good results.