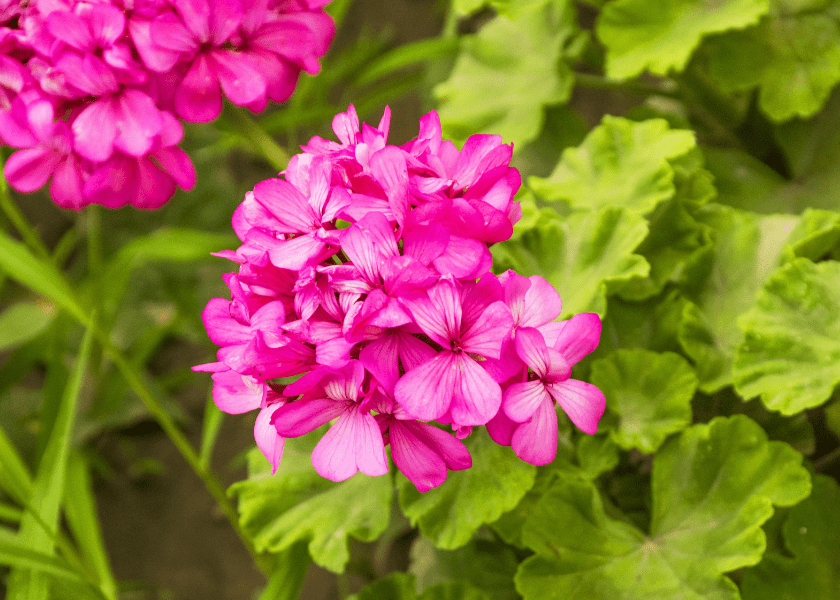 This article was taken from our archives. It first appeared in the October 1953 issue of The Bermudian. It appears here exactly as it did originally.

One of the most popular garden plants in Bermuda is the garden geranium. This very floriferous plant is seen in practically every garden throughout the Colony, which is not surprising in view of its adaptability and ease of culture. The plant will flourish in almost any type of soil and produces an abundance of flowers over a long period. The garden geranium is in actual fact a Pelargonium, a genus of about 230 species of herbs, sometimes succulent, erect or trailing or woody below and almost shrubby. The leaves are usually opposite and often strongly scented. The flowers are usually in umbels with colours of pink, red, purple and white. Most of the plants of this genus grown in gardens are of hybrid origin and although the number of varieties now available is far smaller than in the 19th century, yet they still form an important decorative group in most countries and are likely to have a vogue again in the future. These hybrids fall into several sections. The zonal section, which is well represented in Bermuda, includes most of the varieties found growing here. The Show, Decorative and Fancy Pelargonium are very floriferous and showy, their flowering season being spring and early summer. The ivy-leaved varieties of trailing habit are useful for vases and baskets and in other ways as well as bedding. Many of the hybrids as well as some species are worth growing for their scented foliage.

Pelargoniums are easily raised from seed, and seed freely if allowed to do so. The fruits should be collected just before they burst and put into paper bags to ripen, otherwise the seed is liable to be thrown and scattered. All Pelargoniums are also readily propagated by both stem and root cuttings, though root cuttings can not always be depended upon in all cases to reproduce the variety. For instance, the variety Mrs. Gordon, when multiplied by stem cuttings in the normal way, produces plants with the white flowers flushed with pink typical of the variety, but root cuttings yield plants bearing flowers which are a rich red. In Bermuda the usual method is to raise the plants by stem cuttings planted in situ. These cuttings root quickly in the spring or summer.

The common red variety dominating many gardens is often regarded as a rather tiresome colour, but there are other varieties, particularly the double pink, which will harmonize with most planting schemes. One important advantage is that the garden geranium will thrive in many locations in which soil is either too poor or the situation is too exposed for other flowering plants and will provide a wonderful splash of colour. Visitors to Bermuda frequently express great surprise when they see this plant as a small shrub four or five feet tall, fully clothed in bloom.

It is sometimes interesting to trace the origin of plant names. In most cases the latin name describes the plant in some way whereas the common names fail in this respect. The name Pelargonium is derived from a Greek word signifying a stork, from the resemblance of the fruits of the plant to the head of the bird. Description of this type helps to throw some light upon the reasons for using the botanical name in preference to the popular or common name. It is not difficult to determine why the name Geranium was incorrectly applied to the Pelargonium, for Geranium is the name of another genus of the family of Geraniaceae to which the Pelargonium belongs.