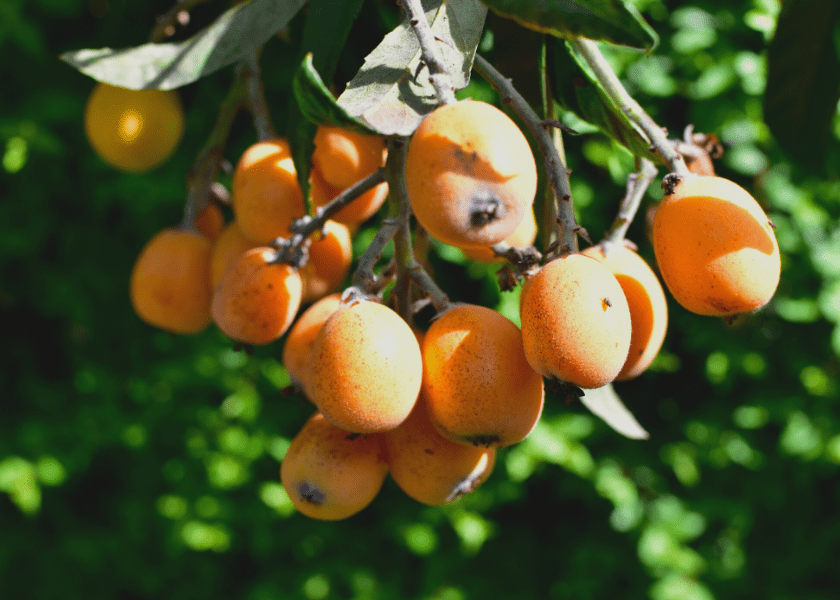 It may be superfluous to mention the useful qualities of the Loquat as a fruit-bearing tree. If adults have not retained their taste for the fruit, children certainly have. They are especially fond of the golden yellow plum-like fruits, normally in season from February to April. Although the fruit is rather acid, it may be eaten raw or cooked. Excellent preserves may also be made with the Loquat fruit. Perhaps the reason why this fruit is not as popular as it might be is because insufficient attention has been given to the selection of varieties. Several years ago the writer attempted to make a collection of the varieties of Loquats found in Bermuda. Some ten kinds were selected and numbered, four of which were chosen for their size of fruit and flavour. Two of these were exceptionally sweet and far superior to the fruit of the common seedlings. In California there are several named varieties, such as, Champagne and Advance. Some of the kinds found in Bermuda are equally as good as the named varieties of California. The majority of the trees seen here are the chance seedlings which bear small rather acid fruits, but if the better varieties were propagated by budding or grafting the superior qualities already mentioned of certain kinds could be perpetuated. The Loquat is therefore a fruit which deserves far greater attention of the research worker, especially in Bermuda, for it flourishes here probably as well and may be better than it does in its native habitat.

As an ornamental plant the Loquat has some very desirable features. It grows to about twenty-five feet with thick oblong leaves between four and eight inches long. The tree flowers in the autumn months. These blooms are white, borne in short dense woolly terminal clusters. The tree stands a considerable amount of wind and may therefore be planted in all but the very exposed positions. It is an evergreen tree.

The Loquat is easily grown from seed. Each fruit has four seeds. These seeds will germinate in three to four weeks if sown immediately they are taken from the fruit. Often seedlings will be found in very odd places. This is due to the seeds being tossed away be children when eating the fruit. As there is considerable variation in the plants raised from seed, the only satisfactory method of perpetuating a special variety is by budding. Buds taken from a choice variety may be inserted into seedling Loquats when they are about as thick as a lead pencil or a little thicker. When the bud has taken and commenced to grow the seedling is cut back to the place just about where the bud was inserted. By this method of propagation it would be possibly to vastly improve the general quality of the Loquat fruit in Bermuda.